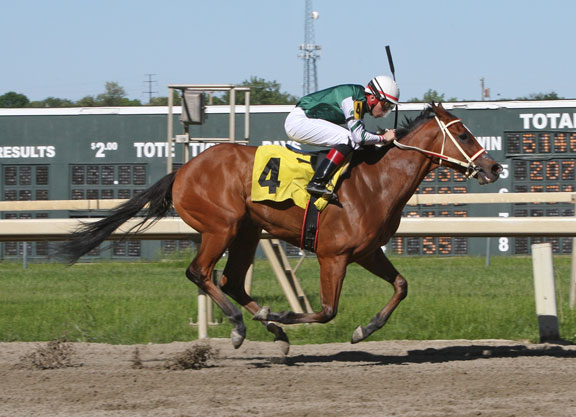 Bethlehem Road, unbeaten in two outings to start his career, stretched out in the Parx Spring Derby Tuesday and turned back several challengers to score an impressive frontrunning victory.

Wiring his debut by 4 1/4 lengths going seven furlongs at this oval Apr. 1, the homebred came back three weeks later and triumphed by open lengths on the engine once again, earning an 86 Beyer for the effort. Taking late money to go off a narrow favorite in this first two-turn try, the bay broke on top and went straight to the lead. Dictating an eye-popping quarter of :22.32, the gelding moderated the pace somewhat down the backside through a half in :46.27. Pressed and briefly overtaken by Fix Me a Sandwich midway around the far turn, Bethlehem Road stiff-armed that rival by the top of the lane and skipped clear again. Second choice Mount Travers, however, had enjoyed a perfect trip from off the pace while saving ground on the turn, and appeared to have the leader measured approaching the sixteenth pole. Bethlehem Road found more yet though, and turned back the Linda Rice invader to get clear for the third time, striding home a convincing victor.

The winner’s dam, stakes placed three times, is a half to SW/GSP A Red Tie Day (Indygo Shiner) out of SP Mamboalot, herself a daughter of GSW Investalot. Bought by Don Ameche for $75,000 at Keeneland November in 2013, Alydarla has a juvenile City Zip filly named Mama Kin who went to Blue Devil Stable for the same price as a KEESEP yearling. She also is responsible for a yearling filly by Malibu Moon and foaled an Outwork filly Apr. 4. Click for the Equibase.com chart or VIDEO, sponsored by Fasig-Tipton.