Unbeaten Filly Could be Derby Bound 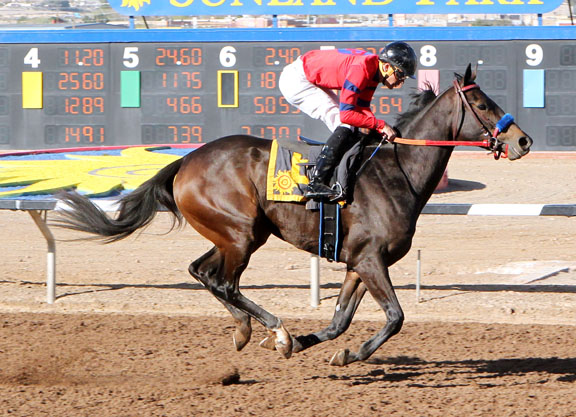 With Sunland Park currently under quarantine due to an equine herpesvirus outbreak, leading locally based sophomore filly K P Wildcat could put her unbeaten record on the line against the boys in the $800,000 GIII Sunland Derby Mar. 20.

A $40,000 OBS June buy last year by agent Mersad Metanovic on behalf of New Mexico-based owner Karl Pergola, the Weston Martin pupil rallied up the rail after a very slow start to earn her diploma first out at Zia Park Oct. 4, and aired by 11 lengths in a six-panel Sunland allowance Jan. 1.

Looking like a sure thing in Friday’s one-mile Island Fashion S. during the first card since Sunland reopened for racing, the dark bay once again struggled from the blocks and caboosed the field by as many as 10 lengths down the backside. Admittedly aided by a quick pace, the heavy favorite began to advance turning for home, galloped past her foes while very wide in the lane, and cantered home the easiest of 7 3/4-length winners.

“She did something that she wasn’t supposed to do,” Metanovic said of K P Wildcat’s most recent performance. “She overcame adversity. To me, really good horses learn how to overcome adversity. When they do, you know you’ve got something special.”

Under normal circumstances, the next logical next spot for K P Wildcat would be the Mar. 20 Sunland Oaks, but considering she may very well be the most talented 3-year-old on the grounds, her connections are considering running for four times the money against the boys.

“If the quarantine stays in effect, we will run the filly in the Sunland Derby,” Metanovic revealed. “If they do open it up to where the colts can come in from out of state, she’ll run in the Oaks.”

The New Mexico Livestock Board has quarantined the Sunland backstretch, and the quarantine will not be lifted until all horses who have tested positive have fought off the virus and left isolation. With another horse testing positive for EHV last week, there is no definitive timetable for when the quarantine might end.

While the connections of K P Wildcat could make an aggressive move next time, they will likely take a somewhat more conservative route after that.

“If we can go forward and win [next time], she’ll probably go to the [GII] Black-Eyed Susan [at Pimlico May 20],” Metanovic, who purchased and managed 2011 Sunland Derby hero Twice the Appeal (Successful Appeal), said. “I don’t want to go heads up with [unbeaten ‘TDN Rising Stars’] Songbird (Medaglia d’Oro) or Cathryn Sophia (Street Boss)–I don’t want anything to do with either one of them… I [told Pergola], ‘You’ve got to be smart and play to your advantage, not play to your disadvantage because you want to run in the Kentucky Oaks.’ It’s great to run in it, but we’re here to compete. There’s no competing this year–this year is unbelievable with fillies.”

While picking out one horse of K P Wildcat’s quality for just $40,000 is plenty impressive on its own, Metanovic and Pergola have been on quite a run after just one year of working together.

“I’m really happy for my client,” Metanovic said. “He gave me an opportunity. That was the first year I bought a total of four horses for him. Three of them have run and won maiden specials first time out, so they’re a combined five-for-five.”

Later on Friday’s card, Pergola colorbearer Awesome K P (Awesome Again) made a successful debut for Martin. Metanovic scooped up that one for just $48,000 at Barretts May. The veteran agent also secured Pergola’s Unbridled Critic (Unbridled’s Song) for $50,000 at the Fasig-Tipton Midlantic sale, and saw that well-bred colt air by six lengths first up at Zia in November.

Pergola, who owns a construction business, has six or seven in training altogether, and a broodmare band of about nine.

Metanovic, who was reached Tuesday while shopping at Fasig-Tipton, is on the lookout for the next K P Wildcat, Unbridled Critic or Awesome K P as the juvenile sales season gets underway.

“I’m not that guy that wants to go buy the most expensive horse–I’ve never been that guy,” Metanovic remarked. “I don’t think there’s much magic to that. The magic is trying to select the one that very few want. That’s my goal.” —@BDiDonatoTDN