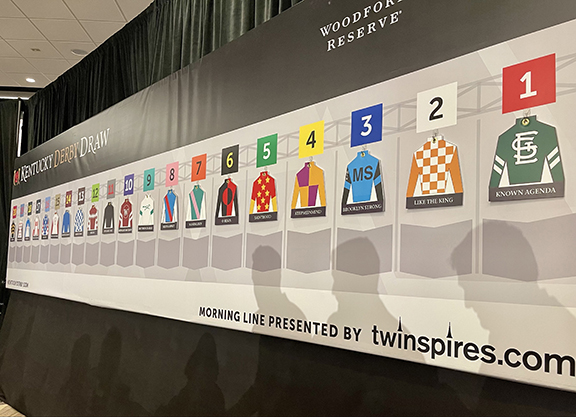 The Godolphin homebred and 'TDN Rising Star,' tabbed as the 2-1 favorite on Mike Battaglia's morning line, made it a perfect five-for-five for trainer Brad Cox with a hard-fought, neck decision over Highly Motivated (Into Mischief) in the GII Blue Grass S. at Keeneland Apr. 3. Luis Saez, disqualified from first aboard Maximum Security in 2019, has the call.

Cox will also be represented by fellow 'Rising Star' and GII Risen Star S. winner Mandaloun (Into Mischief) (post seven). These will be the first Derby starters for the native of Louisville.

“It got a little nerve wracking with both horses still to go and the rail still being out there,” Cox said. [Essential Quality's] got good, tactical speed that he'll be able to get into a good position from there.”

Cox added, “He can adapt to no pace or there being pace in front of him. He's not a one-dimensional horse. He's able to adapt. I've always felt like he's a horse that the further they go, the better he'll get. We're gonna get an extra eighth of a mile Saturday that he's never had before.”

Unbeaten, front-running GI Runhappy Santa Anita Derby winner Rock Your World (Candy Ride {Arg}) was made the second choice on the morning line at 5-1. The $650,000 KEESEP yearling purchase exits from post 15 with Joel Rosario aboard and figures to be prominent early. Rosario piloted 2013 Derby winner Orb.

“He has a good, high-cruising speed,” trainer John Sadler said of the Hronis Racing and Talla Racing colorbearer. “He's fast and he can carry it a long distance. I imagine he'll be forwardly placed. I can see him sitting second or third depending on what the pace is. We have a great rider with Rosario, he'll determine what the pace is and put the horse in the right spot, hopefully. We're generally pretty happy with the post.”

“We got a great group of guys,” two-time Kentucky Derby winning-trainer Doug O'Neill said. “They were gonna be excited no matter what number we got. These horses reflect our energy, and win, lose or draw, we're bringing great energy to 'Charlie' and he's giving it back to us. It's a great post, you're right in the middle of the pack. We've got so much confidence in Flavien Prat. He's such a great rider. I think the nine is a great spot for us. If the pace is slow, and nobody else goes, at least we showed in the Louisiana Derby that we could go to the front. I think Flavien is gonna go in with an open mind and just play the break.”

“It certainly wasn't the one we were hoping for,” Pletcher said of Known Agenda's rail draw. “But I've often said sometimes you get bad trips from good posts and good trips from bad posts. I think hopefully with the new starting gate that will make a little bit of a difference.

Pletcher continued, “I was kind of hoping for Sainthood and Bourbonic to draw inside and Dynamic One and Known Agenda to draw in the middle towards the outside. I thought we did OK with two of them. Nothing we could do about it. We'll focus on the things we can control.”

“It's definitely on the bucket list,” Asmussen said. “We've been given tremendous opportunities and the two horses this year are great examples of that.”