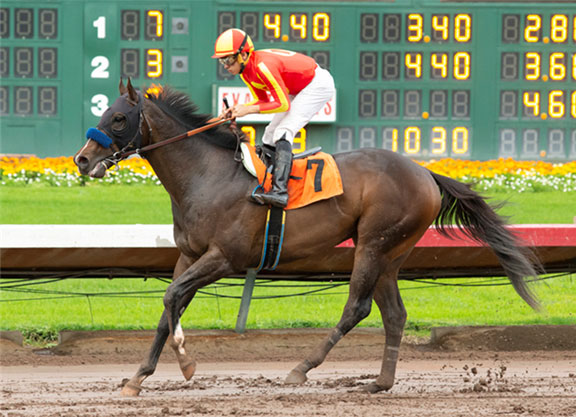 Mike Pegram, Karl Watson and Paul Weitman’s Speed Pass (Bodemeister), an open-lengths winner in two outings against lesser company at Los Alamitos, will get the acid test Saturday at Santa Anita in an evenly-matched renewal of the GII Palos Verdes S.

Bought for $150,000 at Keeneland September in 2017, the dark bay didn’t make his debut until Sept. 20 of his 3-year-old season, but rallied smartly up the rail to graduate at this trip. Catching a sealed track following a brief layoff Dec. 7, the gelding took a significant step forward, rallying from off the speed to win going away by seven lengths while clocking his final quarter in a sharp :23.53. He shows several swift works for trainer Bob Baffert in the interim, including a five-furlong bullet in 1:00 flat (1/23) here Jan. 10.

“This is a step up, but he’s a nice horse,” Baffert told the Santa Anita notes team. “If he runs well here, I might take him to the Middle East.”

Baffert brings backup in Patti and Hal Earnhardt’s once-promising Ax Man (Misremembered), who looks for a return to form off the bench. Recording Beyers of 101 and 99 in the spring of his 3-year-old year, the latter of which came in a 6 3/4-length conquest of the Sir Barton S. at Pimlico, the homebred disappointed when third at odds-on in both the GIII Matt Winn S. and GIII Los Alamitos Derby before finishing 12th in the GI Malibu S. Appearing to right the ship with a front-running allowance score here last February, he was shelved after backing up to finish fifth, beaten 10 lengths, in the GII San Carlos S. Mar. 30. He, too, brings a sharp local worktab to the table, highlighted by a five-panel spin in :58 2/5 (1/50) Dec. 16.

Returning off the same layoff is Hronis Racing’s St. Joe Bay (Saint Anndan), a 15-1 winner of that aforementioned San Carlos. Before that, the 8-year-old was fifth in the Palos Verdes, but captured this event in 2017 when training for Peter Miller.

Hronis Racing will have another chance–in partnership with Lane’s End Racing–in Flagstaff (Speightstown), who looks for a signature win in his first start as a 6-year-old. Knocking around the allowance ranks since breaking his maiden here in June of 2018, the dark bay was a good third behind Eclipse finalists Omaha Beach (War Front) and Shancelot (Shanghai Bobby) in the GI Santa Anita Sprint Championship S. before gamely notching his first stakes success in the Damascus S. on the Breeders’ Cup undercard here Nov. 2.