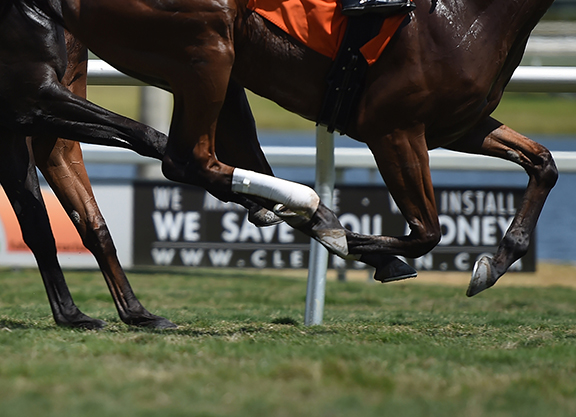 The opinion-heavy but heretofore science-light debate over whether or not certain stallions covering record numbers of mares per year will weaken the Thoroughbred breed gained a lot of clarity in late June when the University of Kentucky's Gluck Equine Research Center released the findings from part one of its genetic diversity study. Tuesday, UK professor Ernie Bailey, PhD, joined the TDN Writers' Room presented by Keeneland as the Green Group Guest of the Week to explain the major takeaways from the Gluck Center's research, what it means for the breeding industry, what comes next in the study and more.

“We now have a really great tool, we can do whole genome sequencing, we can sequence every single base, every single piece of DNA in a horse,” Bailey said. “That's really the complete assessment of diversity that one can do. The costs of doing sequencing have been dropping precipitously over the last 10 years and it's come to the point where it is feasible for us in research to do that. So we set out to sequence 100 Thoroughbred horses to assess the diversity that exists by soliciting samples from over 1,000 Thoroughbred horses. The breeders were very responsive and helpful for that.

“From that, we looked at the pedigrees, so we picked the 100 horses among the 1,000 that appeared to be the most diverse. And our goal was really to capture all of the common genetic variants that exist in the Thoroughbred and a lot of the variants that are fairly rare, less than half of a percent, to basically get a snapshot today of what the Thoroughbred looks like. The results that we had were interesting; we found that there's considerable genetic diversity in the Thoroughbred, and it overlaps that of different breeds. This means that the Thoroughbred breeders have done a good job over 300 years of continuing to maintain the diversity in the breed. That's not to say that there isn't a decrease when breeders are selecting for horses. Inbreeding is a constant part of it and it is going to gradually increase over time. So what we want to do is to be in a position to monitor the changes in the genetic diversity.”

Bailey was later asked about The Jockey Club's recently rescinded rule restricting the books of stallions to 140 mares, and whether that number is statistically significant.

“There isn't any academic information that says 140 is a magic number as to protecting the integrity of the breed,” he said. “I'm not sure where the number came from. One of the things that we would like to do is to be able to look at the diversity model, the breeding, and make a recommendation as to what is the proper approach. It's common sense that if you reduce the number of the stallions that you use, that you would restrict diversity, you would restrict inbreeding. But the study that we did shows that there's a lot of genetic diversity, so this is a really small effect. There are perhaps 100,000 broodmares that exist out there, and they basically contain most of the diversity that exists in the Thoroughbred. So it's likely that restricting the book size for a small number of stallions is going to have a very minimal effect. It would be a bit like trying to turn an oil tanker around in the middle of the ocean. If you have a rowboat that is pushing on the bow, you're not going to have a very large effect on it. I don't know what the answer is. I'm skeptical about 140. But I think that when we have the numbers about the diversity, we can then model and make a prediction and say, here is the best way to manage it.”

Elsewhere on the show, which is also sponsored by Coolmore, the Pennsylvania Horse Breeders Association, XBTV, Three Chimneys, West Point Thoroughbreds and Legacy Bloodstock, the writers reacted to Life Is Good (Into Mischief)'s GI Whitney S. win, the explosive results from this week's Fasig-Tipton Saratoga Sale and the California Horse Racing Board's decision to require licenses for media members on the backstretch. Click here to watch the show; click here for the audio-only version or find it on Apple Podcasts or Spotify.