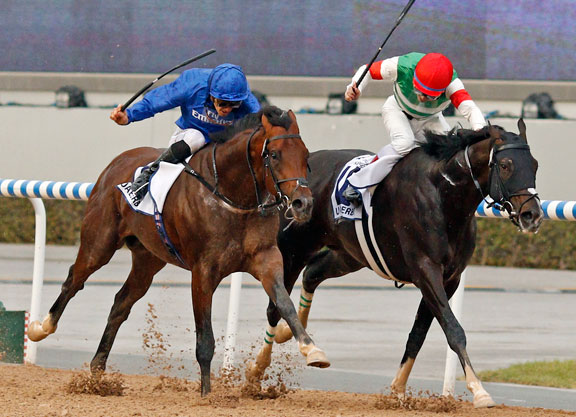 Thunder Snow and Epicharis do battle in the UAE Derby | Racingfotos.com

A tremendous duel between two high-class colts saw Thunder Snow (Ire) (Helmet {Aus}) just edge out Epicharis (Jpn) (Gold Allure {Jpn}) to win Saturday's G2 UAE Derby. The two horses had the race to themselves from early in the straight and as they scrapped it out, Thunder Snow appeared to jink away from Epicharis. It later transpired he spooked at some track markings and that gave the initiative to the Japanese runner who looked like emulating his compatriot Lani (Tapit), who won the race last year. However, Christophe Soumillon galvanised another effort from his gallant partner to just get his head in front where it mattered and win by a nose. Todd Pletcher's Master Plan (Twirling Candy) finished his race out well closing all the way to the line to finish third. Thunder Snow was recently nominated for the American Triple Crown and his trainer Saeed Bin Suroor commented, “The horse is a champion. He was a Group 1 winner in France and the jockey gave him a really good ride. We will make a decision later on whether he will go for the Kentucky Derby.”

This has to go down as a high-class display from Thunder Snow, who was drawn out quite wide in stall 10. He showed ample early speed to allow his jockey to slot into a prominent position on the heels of the leaders as the two Japanese raiders cut out the early running. As the only Group 1 winner in the field he probably deserved to be a shorter favourite than he was, as not only was he a top-class juvenile last season, but he had also proved he had trained on into a proper 3-year-old. His five length defeat of South Seas (Ire) (Lope De Vega {Ire}) in the G1 Criterium International at Saint Cloud last October was backed up by an impressive reappearance when, tackling dirt for the first time, he romped home in the G3 UAE 2000 Guineas on Feb. 11. Again displaying his versatility on Saturday, he opened up a potential GI Kentucky Derby bid, something his owner Sheikh Mohammed did not dismiss after the race. “A very good option, yes,” said Sheikh Mohammed when asked about Churchill Downs in May. Christophe Soumillon was riding a quick double after his win on Vazirabad (Fr) (Manduro {Ger}) and explaining his mount's wayward trajectory a furlong from home he said, “I was trying to get him concentrated but at the 200 metre mark he saw the marks on the ground from the gates and he got scared about it, changed legs and he hung. I tried to keep concentrating because I knew it was not finished. He wants to make it hard for me, but I just keep it going. He must be a great horse.” When asked his opinion if he was a strong Derby challenger Soumilllon added, “I think today he showed he was just a bit immature. Its always difficult to say if he can handle the Kentucky Derby. You never know how good the competitors will be overseas, but he is a great horse and I also love him on the turf. He is so versatile.”