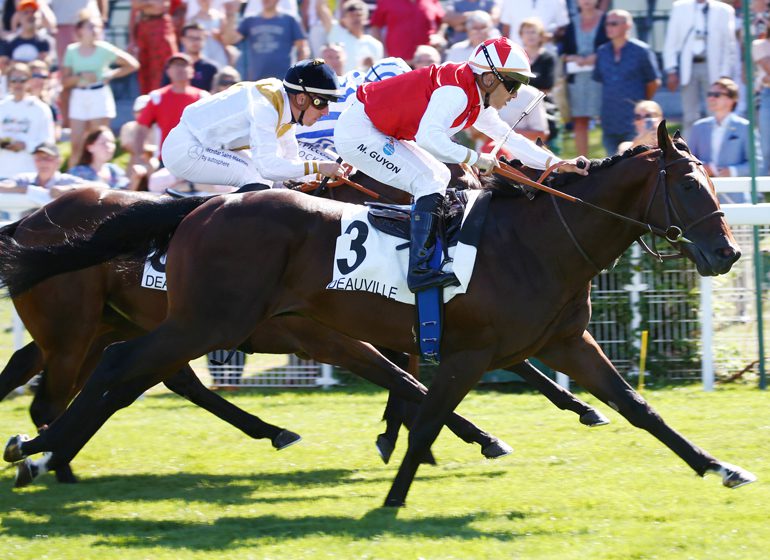 Ocean Vision became the first stakes winner for his three-time Group 1-winning sire (by War Front) with a rallying victory in the Listed Prix de la Valley d'Auge at Deauville on Saturday. A winner at first asking at Dundalk in April, the bay was fourth in his next two starts including the May 21 G3 Marble Hill S. at the Curragh to subsequent Group 2 winner Blackbeard (Ire) (No Nay Never).

One of the longer shots on the board, the Tim Donworth trainee raced near the tail of the field down the straight until half-way. Shifted out, he began to edge past rivals up the extreme outside, until just pipping the group-placed Vicious Harry at the line. His Donworth-trained stablemate Kokachin was just touched off for second in a blanket finish.

“Jim Ryan called me and told me he had a horse for me that he thought would be better suited by the ground in France,” explained trainer Tim Donworth. “That was two months ago and ever since he arrived I had this race in mind for him. I had worked him recently with the filly [Kokachin] and I felt they both had a good chance of getting a share of the money. He is a horse that's slow at the start, but capable of finding more and more in the latter stages providing there is a good pace.  That is what I said to Maxime [Guyon] and he rode a great race. I have no words, it's pure magic, my first listed race for my first Deauville meeting and my parents are here. We will see what could be next, the filly seems to be on her best distance, but the colt might go further.”

The third winner of eight foals, Ocean Vision is the first offspring of the listed-placed Balaagha to earn black-type with Saturday's victory. From the extended family of Grade I winners Echo Zulu (Gun Runner), Echo Town (Speightstown) and Engine One (Our Michael), she has a yearling colt by El Kabeir still to come. VIDEO, sponsored by TVG.