The morning after a fire in barn 60 at Belmont Park which claimed the lives of two of his horses, trainer Wayne Potts made an emotional post on Facebook identifying the two horses as graded stakes winner American Sailor (City Zip) and Beastie D (Verrazano) an unraced 3-year-old who was a $15,000 OBS Winter Mixed Sale purchase earlier this year.

The 9-year-old American Sailor won the GIII Troy S. at Saratoga, crossing the line second, but moved up to first upon the disqualification of Imprimis (Broken Vow).

“I wanted to take a moment to express my sincere gratitude to everyone who assisted in removing my horses from the fire this evening,” posted Potts at 1 a.m. “Thank you from the bottom of my heart to every single one of you that put yourselves at risk to make sure 58 horses are able to see another day. The actions of so many this evening proved that this industry is a family with a fierce love of the horse that triumphs over anything else.

“I am heartbroken to say that Beastie D and American Sailor were both unable to be saved and perished. Beastie D, a 3yo Verrazano colt was a recent purchase from the Sale in Ocala. While we didn't have him long, his presence was felt as he was an individual with an abundance of class and potential.

“American Sailor was a part of my family and took my operation to a new level. We were preparing for a 9yo campaign and he had been training fantastic. This was a horse that owed me absolutely nothing. He was the pride and joy of my stable and was the horse that took me places in my career that I had only ever dreamed of going. Sailor was so loved by everyone that worked with and around him. He was one of the sweetest horses to be around in the stall, but when he stepped foot on the track–he was nothing but business. He was family.

I want to also express my condolences to my owners Dan Eubanks and Raj and Vedhya Jagnanan who love their horses dearly & to my staff who go above and beyond day in and day out to make sure our horses receive the best care. Thank you again to everyone who has reached out. It is much appreciated. #BELMONTSTRONG.”

The New York Racing Association issued a press release Tuesday night saying that they had “responded to an active fire affecting Barn 60 at Belmont Park. NYRA security was joined by backstretch staff in rendering immediate assistance to the horses stabled in the barn at the time of the incident.”

“The fire was restricted to Barn 60 which holds stalls for horses under the care of trainers Wayne Potts and Jeffrey Englehart. A total of 58 horses were safely evacuated from the barn as a result of the immediate response by NYRA security, backstretch staff and the Elmont Fire Department. Despite the best efforts of those involved in the rescue, two horses under the care of Wayne Potts perished as result of the fire. There were no reported injuries to barn staff or NYRA employees.” 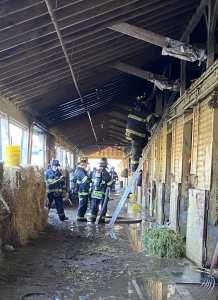 According to the public information officer for the Nassau County Police Department, crews from both Elmont, N.Y., the town in which Belmont sits, and nearby Valley Stream, N.Y. responded to the scene.

“The tragic loss of both horses will be deeply felt by the hard working women and men of the New York racing community, who dedicate themselves to the sport and to the care of these equine athletes,” said Dave O'Rourke, NYRA President & CEO. “That collective dedication and sense of community was on display this evening, when the heroic and selfless response of so many prevented further loss and saved the lives of dozens of horses.”

The press release from NYRA said that firefighters “responded within minutes to extinguish the fire and secure the scene. The New York State Fire Marshal and officials from Nassau County are investigating the cause of the fire, which was not immediately apparent.”

Reports of the fire began to circulate on Twitter shortly after 6 p.m., with several mentioning loose horses.

Trainer Robert Falcone, Jr. was one of the first on the scene after noticing the smoke on his way to the track kitchen and quickly gathered a group of horsemen to help evacuate the horses from the smoke-filled barn. He also posted a request for help on Facebook.

“I knew something wasn't right, so I ran back to our barn and yelled to my team to grab shanks and halters and hurry up,” said Falcone, Jr. “I thought I'd post it and that someone from the backside is bound to see it and once one person sees it, they'll start calling people.”

Falcone described the hectic scene as the racing community jumped in without hesitation to save as many horses as possible.

“It was really smoky in there,” he said. “We were trying to get through a shedrow full of smoke and get into stalls of horses and you can't see into the stalls. At the same time, there were horses without halters running down the shedrow that you can't see. As you're running in and out, as soon as someone yells, 'loose horse,' you have to get against the wall because you don't know where he's coming from.”

He continued, “As soon as we took the horses out, someone would take them from us and get them to a safe spot. Then we would go back in and get more and come back out again. We started using the cross bar [stall guard] when we ran out of shanks to run back in and keep getting them out.”

Falcone was also in the stall with Potts attempting to save American Sailor, who was one of the two horses lost in the blaze.

“I feel so bad for the horses that died. I was in the stall with Wayne for American Sailor,” said Falcone. “Wayne was standing next to me and the horse was somewhere in the stall and you couldn't even see each other. We were trying to get the horse out but it was impossible to see and communicate. We just had to get out of there. You can only stay in there for so long in all that before you're going to pass out. I feel so bad we couldn't get him out.”

Horsemen continued to show up as the word spread to assist with catching and relocating the many horses running free on the backside. Trainer Brad Cox's assistant Dustin Duggas was among those who jumped to action, welcoming 21 of the horses into his barn. The others were moved to various barns with empty stalls.

“Dustin had 21 empty stalls on his side, so we started counting up horses and sending them over,” said Falcone. “It was pretty quick how fast we organized everything in that time frame and in those circumstances. There's not many of us making a great living doing this. We do it for the horses and even when they're not horses in your barn, when something happens everyone bands together so quickly. It's not even a thought process, it's just somebody needs help and go. We're all here for one reason and it's because we love the horses.”

Wednesday morning, NYRA sent a text to horsemen to ensure they had accounted for all of the horses dispersed around the backside.  The text reads, “Attention Horsemen: Please do a head count of the horses in your barn. If there is a horse or horses in your barn that do no belong to you please contact the safety Steward or stall office.” NYRA's Director of Communications Patrick McKenna said the message was just a “double-check.”

Tuesday night, trainer Raymond Handal Tweeted, “Tragic day. Barn fire out. The horses have been relocated and everyone seems to be situated, hay, water, and feed tubs set for surviving group. The entire racing community came together with a force to help. So sad and heartbroken for the ones that didn't make it.”

Just before 8 p.m. Tuesday night, Kantarmaci Tweeted a video of himself in a barn in front of a horse's stall and said, “Sierra doesn't want me to leave him alone after fire at Belmont Park Race Track.”