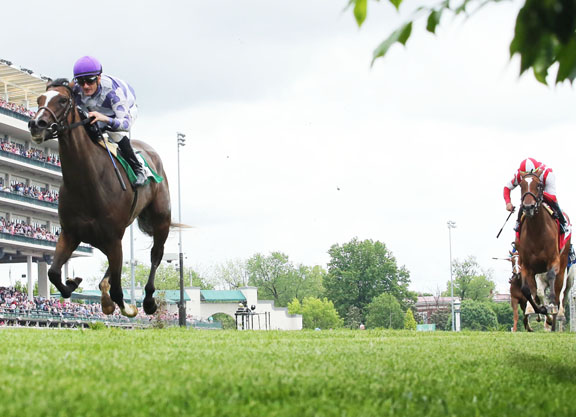 Making her first afternoon appearance since romping away by nearly seven lengths in the GI Breeders' Cup Juvenile Fillies Turf beneath these same Twin Spires last November, 'TDN Rising Star' Newspaperofrecord  (Ire) (Lope de Vega {Ire}) was duly bet down into 20 cents on the dollar for Friday's GIII Edgewood S. But just like fellow 'Rising Star' and stablemate Rushing Fall (More Than Ready) 12 months ago, the heavy chalk tasted defeat for the first time in her career, as second favorite Concrete Rose (Twirling Candy) raced past her as the sixteenth pole and on to a convincing victory.

Quickly away from the one hole, Newspaperofrecord was allowed to make the running while racing well off the inside rail and it appeared that Irad Ortiz, Jr., had a fistful of horse as they raced under the wire with a lap of the Matt Winn turf course to travel. Two or three deep into the first turn, Newspaperofrecord appeared to settle better, as the half-mile was posted in :47.87 after an opening couple of furlongs in :23.53 over turf listed as good, but likely on the easy side of that characterization after morning rains. She opened up on her rivals going apparently well on the turn and into the lane, but Concrete Rose, covered up from mid-division for the opening five panels, made eye-catching progress on the swing for home, rolled up to the heavy favorite while racing on her incorrect lead at the sixteenth pole and pulled readily clear. Winter Sunset (Tapit) veered to her right at the break, perhaps brushing the gate, trailed for most of the opening five-eighths of a mile and rallied gamely to be up for third.

A debut winner sprinting over the Saratoga turf last August, Concrete Rose punched her ticket to the Breeders' Cup with a smart success in the GII Jessamine S. at Keeneland in October, but raced on the worst part of the track on Breeders' Cup day and struggled home eighth. The dark bay resumed with a half-length score in the GIII Florida Oaks Mar. 9, where she had Winter Sunset a length back in third.

“She had one bad race [Breeders' Cup Juvenile Fillies], there were a lot of reasons for that,” winning trainer Rusty Arnold said. “We ran her back pretty quick, she's matured a lot at three and ran a good race. She beat a couple of good horses in there. I would have preferred for it not to have rained. But this turf is really fresh, we've only run on it three days. We got in on it in a lot better spot than last fall.”

Newspaperofrecord holds an entry for next month's G1 Coronation S. at Royal Ascot, a race for which she was first or second favorite ante-post. Trainer Chad Brown was willing to shoulder the blame for the loss and is keeping his options open going forward.

“She just wasn't fit enough today,” he said. “Irad [Ortiz, Jr.] said she was a little keen early on turf–it looks pretty soft–and she set some strong fractions–:47-and-change early. I was a little concerned. She just ran out of gas the last part of it. Hopefully, she gets a lot out of this race. It's unfortunate she's no longer undefeated, but we'll have to go on. We have a really good horse. We'll have to see what we'll do with her next.”

One of two graded stakes-winning females on the turf for her sire in 2019 and one of a half-dozen graded winners overall, Concrete Rose is the last of three foals listed for her dam.