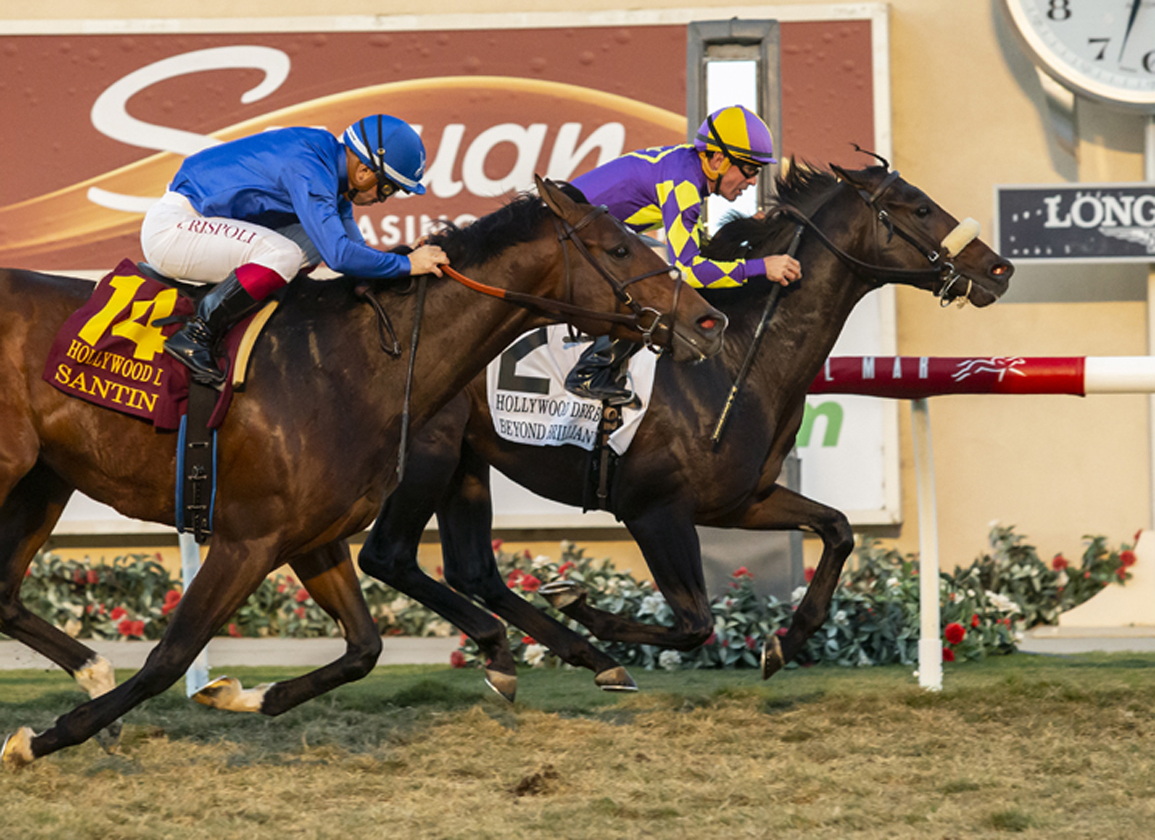 Twenty-four hours after producing Say the Word (More Than Ready) from last to scoop the GII Hollywood Turf Cup, jockey Kent Desormeaux rode a perfect race from the front to upset Saturday's GI Hollywood Derby with the appropriately named Beyond Brilliant (Twirling Candy) for Lee Searing's C R K Stable and trainer John Shirreffs. Midwest shipper Santin (Distorted Humor) was given a peach of a ride from the 14 hole by Umberto Rispoli and was getting to the winner late, while Cathkin Peak (Ire) (Alhebayeb {Ire}) checked in third.

Desormeaux has found a purple patch of form over the last week or so at the seaside oval, winning with eight of his mounts since Nov. 20, a streak that also included the $100,000 Cary Grant S. aboard longshot Principe Carlo (Coil) Nov. 21 and Friday's Turf Cup. A three-time Kentucky Derby winner, the Hall of Famer was winning his first Hollywood Derby Saturday.

Ridden positively from gate two, Beyond Brilliant had some token early pressure from Team Merchants (Nyquist), but was clearly in front with a circuit to travel and went through the opening couple of furlongs in :23.96. Desormeaux got Beyond Brilliant to switch off beautifully in the middle furlongs–the half was up in :49.23 and three-quarters in 1:13.62–and began to feel for his mount in earnest with 2 1/2 furlongs to travel. Asked to kick off the home corner, Beyond Brilliant pinched a bit of a break under energetic handling and covered his final eighth of a mile in :11.88 to score narrowly. Santin was able to sit a three-wide trip with cover for the opening seven furlongs, followed the move of the well-bet Subconscious (Tapit) while going better than that one into the lane and got to within a neck of the winner on the line. Cathkin Park parlayed an inside trip into a board placing.

A seven-length maiden winner going a mile on dirt at Santa Anita June 13, Beyond Brilliant was well-beaten in two subsequent tries on the main track, but–with Desormeaux in the irons for the first time–went gate to wire over this turf course Sept. 6. He was unable to make the lead from the 10 hole in the GII Twilight Derby in Arcadia Oct. 31, but fought on gamely to round out the triple beneath Subconscious and Cathkin Peak.

“All credit for this win goes to the barn,” Desormeaux said. “They've done wonders with this horse over the past month. When I rode him last time, he was a handful to control. Today he was easy. He was dry as a bone in the paddock and he was happy out on the racetrack. His mind was right. And he showed he can sprint that last part.”

Beyond Brilliant is the 33rd stakes winner, 13th graded winner and seventh Grade I winner, two of which have accomplished that feat on the grass.

The winner, whose half-brother Ainoa (Blame) was scheduled to compete in an allowance race on dirt at Hanshin Sunday afternoon (Japan time), is out of a winning half-sister to MGSW & GISP Summer Applause (Harlan's Holiday) and MSP Big Easy (Gulch). His third dam was responsible for the outstanding Chicago-based handicap horse of the late 1990s Recoup the Cash (Copelan). Barren to City of Light for 2020, Summer On the Lawn produced a Mitole filly this past February and was most recently covered by More Than Ready.