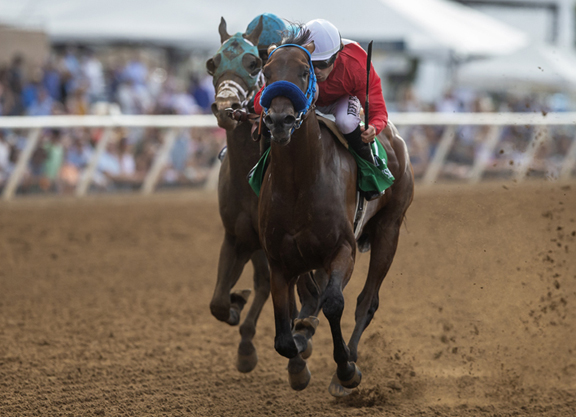 Collusion Illusion seemed to come under a bit of a busy ride heading for home, but leveled off late and fended off a bid from tough-luck Wrecking Crew to go two-for-two on short rest in Saturday’s GII Best Pal S. at Del Mar. Away well, the $300,000 OBSAPR (:10 flat) acquisition sat second last in the early going with only Wrecking Crew–who totally missed the break–behind him. The bay was scrubbed on by Joe Talamo to take closer order into a :45.28 half, but the whip was out by the top of the lane with favorite Fore Left digging in and Wrecking Crew winding up down the center. Collusion Illusion continued to plug away, however, and kicked on to prevail comfortably. Wrecking Crew, an $875,000 Fasig-Tipton Gulfstream buy, did very well to rally into the place spot.

“I had a beautiful trip. And the speed set it up right,” Talamo said. “I was impressed with my horse the way he gutted it out down the lane. And I think the farther the better with him. Wait ’til he goes seven eighths or two turns. Then you’re going to see the best of him.”

“He’s been nothing but a pro from Day One since we got him after the sale,” trainer Mark Glatt said. “He was probably ready earlier than the race he actually debuted in, but we decided to wait for Del Mar and we’re extremely pleased with him. This race came up a little bit quick–I usually like to give a horse more time after his debut–but he’s such a classy horse and he never missed a bite of grain. I thought about running him back in the [Sept. 2 GI Del Mar] Futurity, but who knows what will happen between now and September and he was ready to run now. I wouldn’t rule out the Futurity. That might be a little too aggressive with him, but we’ll keep it as an option.”

Collusion Illusion is the only foal out of his unraced dam, who died in 2018, and appears to be the first foal to race out of a First Dude mare. Natalie Grace was a half to the talented Don Dizney sprinters Bahamian Squall (Gone West) and Apriority (Grand Slam). Collusion Illusion is the seventh graded winner for Twirling Candy, who is having a banned year thanks to the exploits of talented turf filly Concrete Rose and GI Santa Anita H. hero Gift Box.