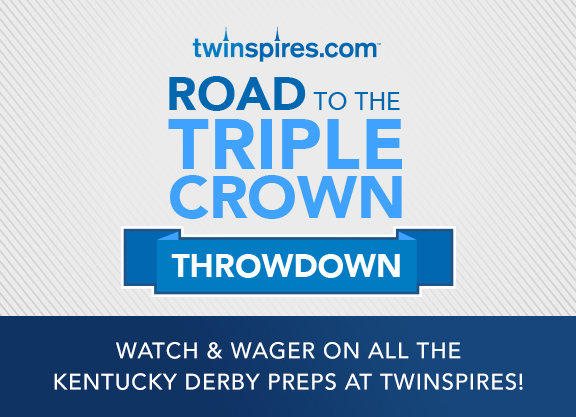 Ed DeRosa of TwinSpires .com takes on TDN's Steve Sherack and Brian DiDonato as they handicap each prep race leading up to the GI Kentucky Derby. The three will make $100 Win/Place bets–highest bankroll after the Lexington S. wins.

DeRosa: GIII El Camino Real Derby – The Southwest concludes the Derby Prep Season, and not a moment too soon for yours truly, who has managed just a win and a second from seven races after Saturday's El Camino Real, where my pick Ann Arbor Eddie was diqualified from second. Bankroll: $490.

GIII Southwest S. – We'll try to bring the Derby Championship Series in with a bang by going with 12-1 Cool Arrow. That was a slow pace when winning the Springboard Mile, and he won't get that here, but he's shown an ability to rate and the rail and weight are both benefits here. Selection: #1 Cool Arrow (12-1).

DiDonato: GIII El Camino Real Derby – Sheer Flattery couldn't have made less of an impact as the 5-2 second choice. Pretty impossible to have that winner. Bankroll: $1160.

GIII Southwest S. – This is a tough spot for a 3-year-old debut, but Silver Dust might be really good and trainer Randy Morse does well with comebackers in dirt routes at Oaklawn. Extremely green both in his breeze at OBS March ($510K) and when fifth first out at Churchill, the big, grey son of Tapit sat behind horses just waiting to explode second out Nov. 20, and did just that as soon as he saw daylight. That race has been productive enough, and, hopefully the time off has allowed Silver Dust to continue to grow up a bit. His works look solid enough on paper, and he's got the pedigree to be a nice one. Selection: #2 Silver Dust (10-1).

Sherack: GIII El Camino Real Derby – Well, at least I didn't pick one of the two favorites. Tribal Storm was moved up to third at 10-1 via DQ after getting cut off badly in deep stretch. Bankroll: $590.

GIII Southwest S. – The lightly raced Silver Dust flashed plenty of ability in his ultra-impressive maiden breaker going a one-turn mile at Churchill at second asking last fall to take a chance on coming off the bench in this ambitious spot. The son of leading sire Tapit has run like a horse dying to stretch out in both of his career trips to the post as well as his :21.2 breeze prior to realizing $510,000 as an OBSMAR 2-year-old. Silver Dust sports a flashy worktab at Oaklawn this winter, including a pair of five-furlong bullets in January, and is well-drawn to make some noise in his sophomore debut. Selection: #2 Silver Dust (10-1).