Twice in a Lifetime? Senor Buscador May Give Peacock Family Second Shot at Derby 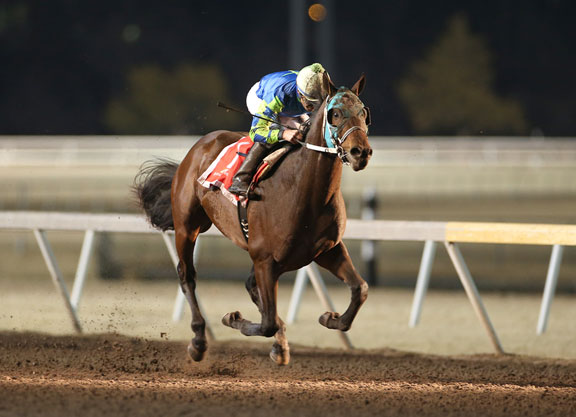 Most of the racing world was likely asleep or otherwise occupied late Friday night, but the small fraction that was awake and watching the action at Remington Park may have witnessed the breakout of a star 2021 3-year-old as well as the birth of a feel-good story of the year candidate. Senor Buscador (Mineshaft), a homebred with just one 5 1/2-furlong start under his belt, was slow out of the stalls in the $200,000 Springboard Mile S. before rocketing past every rival in the 10-horse field to score a dazzling 5 3/4-length romp. It was the kind of performance that gives owners goosebumps. But if you ask owner/breeder Joe Peacock, Jr. it was no surprise.

“To be honest with you, we expected that, which is almost worse, having expectations like that, it really makes you nervous they're just not going to show up,” Peacock said of the Todd Fincher trainee. “We were very happy with it. Todd has always been high on the colt. He said, 'These don't come around very often, and he's one of those,' so we've been excited about him for a while.”

It was less than three years ago that the Peacock family, which is based in Texas but races mostly in New Mexico, felt similar excitement for a brilliant colt that could improbably take them to the GI Kentucky Derby, only to end up heartbroken. Runaway Ghost (Ghostzapper), a half-brother to Senor Buscador–more on that later–had just scored a powerful victory in the GIII Sunland Derby and looked like a legitimate hopeful to wear the roses. But just a few weeks later, he suffered a fracture to his shin and had to be taken out of Derby consideration. Reasonably, Peacock assumed his one shot to run in America's most fabled horse race had disintegrated the way dreams so often do in this game.

“When Runaway Ghost got hurt, we were devastated,” he said. “First for the horse, but also just for missing that opportunity. It's kind of a once-in-a-lifetime deal, right?”

One would think. But along comes Senor Buscador, who posted a 93 Beyer, tied for the seventh-highest number among all juveniles in 2020, in his Springboard Mile romp.

“It's huge for our family,” Peacock said. “Who doesn't want to run in the Derby? This business has so many highs and so many lows, you have to not get out over your skis on these things, which is what we're trying to do right now but it's difficult.”

The fact that the Peacocks are in this position can be traced to their broodmare band, one that contains just a single mare. A small operation, to be sure, but when that one mare is a horse as prolific and consistent as Rose's Desert (Desert God), who needs more? Bred by Peacock's father, Joe Sr., Rose's Desert was a New Mexico terror on the track, winning seven state-bred stakes and earning over $600,000 in her career.

“She was something else,” Peacock said. “She ran 15 times, won 10 and was second the other five. She never got beat more than a length and a quarter in her lifetime.”

But her racing accomplishments are now a side note to Rose's Desert's rapidly developing legacy as a star broodmare. When she retired from racing in the fall of 2013, the Peacock family wanted to give her a chance to truly prove her mettle in the breeding shed and secure matings with top stallions, which meant she couldn't stay home in New Mexico.

“When we stopped running her, we said, 'She's special. She's got to go to Kentucky and we have to see if she can make it as a broodmare,' because we had the faith in her that she would do that,” Peacock said. “And she's been remarkable. Everything she's had can run. She's had four foals race, three of them are stakes winners and the other one is a filly we own [Our Iris Rose {Ghostzapper}] who's three and there's no doubt in my mind she'll win a stakes race when it's all said and done. She's in foal right now to Candy Ride, so we're excited about that. She's such a wonderful animal. I really feel like she's the gift that we've been given and that's the one we want to ride with.”

Back in that spring of 2018, the Peacock family thought they'd be watching the mare's first breakout progeny run in the Derby. Instead, they (almost) saw her produce her next one.

“Senor Buscador was born Derby weekend in 2018 and we were there in Kentucky,” Peacock said. “We had made all these plans to take the family up there. Then when Runaway Ghost got hurt and wasn't able to race, we had never been to the Derby so I said, 'What the heck.' We just went anyway, took all of the family, and we were hoping we'd get to see the foal when we were up there, but as luck would have it, she had him on Sunday right when we got home. We joked at the time that that might be a good omen, that he was born on Derby weekend.”

Racing is the family business for the Peacocks, and it goes back nearly 50 years to when Joe Sr. was running quarter horses.

“One of the first horses he had ended up running in the All-American Futurity, which is like the holy grail of quarter horse racing, so the hook was set there,” Peacock said of his father.

Eventually Peacock Sr. made the transition to Thoroughbreds full-time and brought along his son, who had been going to the track since he was 10 years old.

“It's been special, our family's been doing it for a long, long time,” Peacock said. “I've got five adult children, they're all married and we have six grandchildren and it's a real good opportunity and excuse to get everybody together, get away from home, go do something and hopefully see a horse win.”

The Peacocks' half-century racing heritage has culminated by striking gold with Rose's Desert. And while her first opportunity to produce a Derby starter fell just short, she incredibly has another contender in Senor Buscador, who Fincher is likely to point to Derby preps at Fair Grounds or Oaklawn next. Peacock gets choked up talking about the colt, who was the final horse bred by Joe Sr. and Jr. together. The family patriarch passed away earlier this year.

“I bred that horse with my dad and what he would like to do is get the stud book and go through it, look at all the pedigrees and find horses that all through the pedigree, won money,” Peacock remembered. “He liked to see that they were successful at the racetrack and made money, so he made the decision to breed to Mineshaft. It was the last horse we bred together, and it turned out to be the right one.”