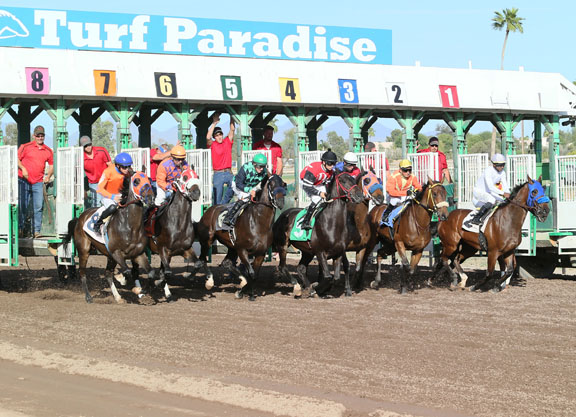 Turf Paradise is proposing to host a live meet next year that will run Jan. 2 through May 1, according to a letter from Turf Paradise general manager, Vince Francia, to the Arizona horsemen dated Thursday.

Turf Paradise had previously announced that it had cancelled its 2020-2021 race meet due to health fears associated with operating a live meet during a global pandemic.

For the proposed meet to go ahead, however, Turf Paradise management listed in the letter a number of caveats, namely that $2.1 million of disputed purse account monies be returned to Turf Paradise, and that the Arizona horsemen form a new representative organization or for the current Arizona Horsemen's Benevolent and Protective Association (AZHBPA) board members and their executive director to resign.

These purse account funds have been the latest bone of contention in a long-running dispute between Arizona horsemen and management of Turf Paradise. Francia previously told the TDN that these funds contractually belong to Turf Paradise for the horsemen that race there.

The horsemen, however, argue that they ultimately wield control over the purse account, as per a prior arbitrated settlement. Indeed, earlier this week a widely circulated email stated that the AZHBPA has secured a good chunk of this money and placed it into a trust to pay purses if and when racing resumes elsewhere.

“That money does not belong to the AZBBPA or to Turf Paradise,” the letter states. “It belongs to the horsemen who are racing live at Turf. Without that money being transferred back into the horsemen's purse account, Turf would not be able to host the proposed race meet. It has been publically stated by AZHBPA President Bob Hutton that, 'they [the funds] will be used only for purse money for whatever track that wants to run a live meet!'”

The “second condition” of a meet at Turf Paradise is that the Arizona horsemen form a new group that represents a “majority of horsemen at Turf Paradise,” and represent the horsemen's interests in live racing and simulcasting at Turf Paradise. According to the letter, the new group would have to elect a board of directors, including a president and officers, and create by-laws.

The letter also states, however, that another “quicker way” to accomplish this goal would be for the current AZHBPA board members and their executive director to resign their positions, “making room” for a new board and executive director.

As per the letter: “Recently the AZHBPA and Turf Paradise agreed to terminate the current contract between us. A new contract will be needed between Turf Paradise and the new horsemen's group.

“Suffice it is to say, both Turf and the AZHBPA have tried to resolve their differences. But with the transfer of Turf Paradise horsemen's purse money into an account by the AZHBPA–without advising Turf management–there is no point in further dialogue or negotiations between the two of us.

“Time is of the essence. There is a lot that Turf Paradise and the horsemen need to do so that we can open racing on Jan. 2. This also includes Racing Commission approval of the proposed live dates. To get this done everyone is going to have to move quickly.”

National HBPA president Leroy Gessmann re-stated the AZHBPA's position that it ultimately controls the purse account, and that the money is intended for whatever facility conducts a live race meet in Arizona.

“If Turf Paradise wants to run a live meet, all they've got to do is apply for live dates, meet the safety standards set forth by the commission, and we will provide them with the purse money,” said Gessmann.

When asked about the second condition in the letter–the formation of a new horsemen's group–Gessmann responded: “I don't know what to say about that–the HBPA is the one that holds the purse money.”

The HBPA is also the horsemen's recognized group, he added, “not only at Turf Paradise but according to the state.”

Gessmann also cast doubts over the sincerity of the proposed race-dates in the letter. “All [Turf Paradise owner, Jerry Simms] is trying to do is keep his OTB system intact,” said Gessmann. “He's not trying to run a race meet.”

According to Francia, however, the change in heart concerning the operation of a live race meet this ensuing winter has been brought about by concerns for the Arizona horsemen.

“The horsemen have wanted and needed a place to race during the winter,” he said. “The pandemic hasn't gone away–we're well aware of that, and we're going to have to deal with that.”

When asked about his request for the horsemen to form a new group to represent the horsemen's interests, Francia said that it's an effort to break the intransigence in ongoing negotiations between the two entities.

“Personally, I've known Mr. Simms for 20 years–I'm his good friend as well as his employee,” said Francia. “I am just exhausted and disheartened by this negative energy that has been directed towards him by this board.”