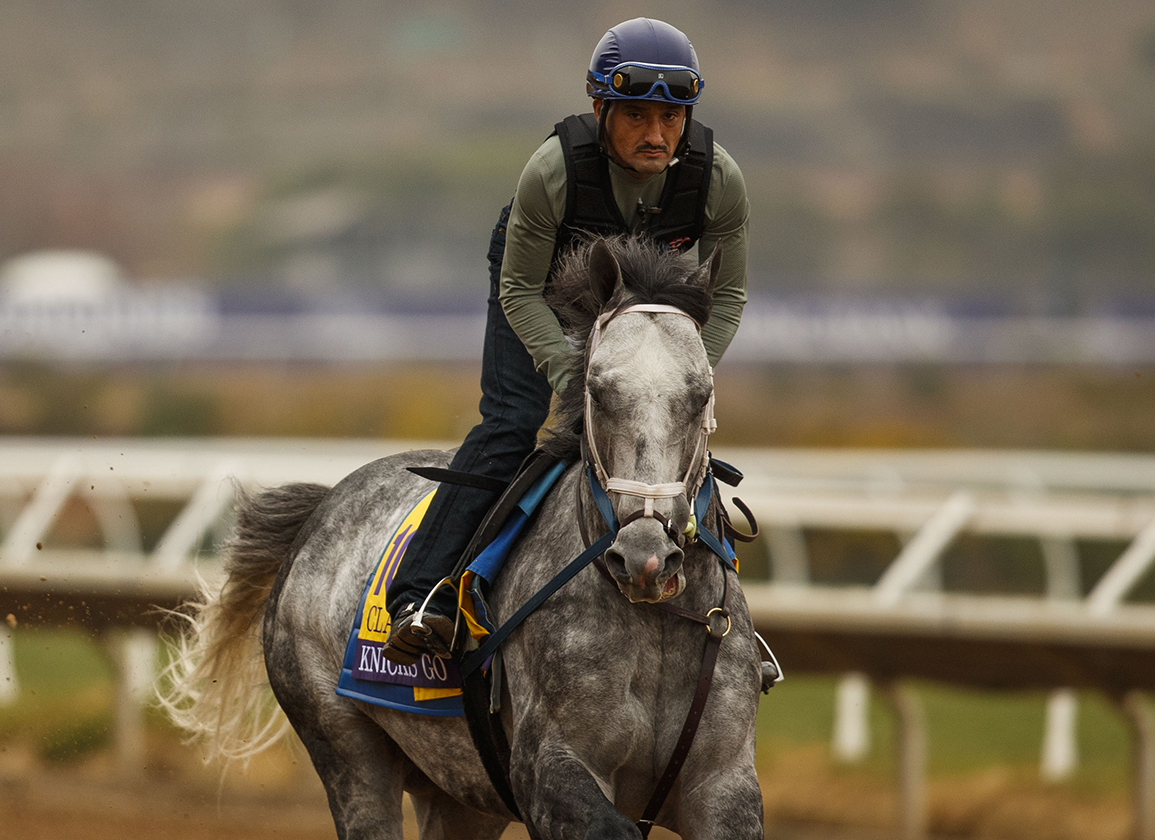 DEL MAR, CA – With no sign of the sun under a dense cloud cover at daybreak, champion Essential Quality (Tapit) set the stage for this weekend's 38th Breeders' Cup World Championships jogging the wrong way along the outer rail on a cool and comfortable Tuesday morning at Del Mar.

Last year's GI Breeders' Cup Juvenile winner is the second choice on the morning-line at 3-1 for Saturday's GI Breeders' Cup Classic trailing only his Brad Cox-trained stablemate Knicks Go (Paynter) at 5-2. More on the latter gray in a bit.

War Like Goddess (English Channel), sporting four white wraps, turned in a strong gallop as she leads the way into the GI Breeders' Cup Filly and Mare Turf.

The unbeaten and black-blinkered One Timer (Trappe Shot) was feeling good during his exercise as he looks to light the lamp in the GII Breeders' Cup Juvenile Turf Sprint.

Japan's Loves Only You (F/M Turf) heading out to train pic.twitter.com/4R9TDx6n7A

There was still plenty more to come following the renovation break as well.

Trainer Rudy Rodriguez had his hands full aboard his GI Breeders' Cup Filly and Mare sprint contender Bella Sofia (Awesome Patriot) as she passed a line of photographers by the winner's circle.

Fellow Filly and Mare sprint runner and MGISW Ce Ce (Elusive Quality) couldn't be looking any better in the flesh and gave off plenty of good vibes during her morning exercise.

The field for the Filly and Mare Sprint will be down to just five following the defection of the Fasig-Tipton November-bound GSW & MGISP Estilo Talentoso (Maclean's Music). “She came out of her gallop a tick off on her right front,” a Tweet from co-owner Medallion Racing read.

California Angel (California Chrome) (GI Breeders' Cup Juvenile Fillies Turf), one of the feel-good stories of the Breeders' Cup after bringing just $5,500 as a OBS June 2-year-old, was easy to spot with a pair of white blinkers as was her affable cowboy-hat wearing trainer George Leonard, III.

Defending GI Breeders' Cup Turf winner Tarnawa (Ire) (Shamardal) stood out amongst a group of Euros while trainer Leah Gyarmati waited with the lead shank as Sail By (Astern {Aus}) did just that ahead of the GI Breeders' Cup Juvenile Fillies Turf.

After watching his Ballydoyle troops march down the main track from the clubhouse stands, including the talented Love (Ire) (Galileo {Ire}) (F/M Turf), trainer Aidan O'Brien graciously stopped for a photo and exchanged pleasantries with an adoring fan. All class.

Looking for a third win in the main event, Hall of Famer Bill Mott ponied Art Collector (Bernardini) through the purpled-out Del Mar paddock for a quick schooling session at 8:48 a.m.

With training hours winding down, Knicks Go fired a warning shot for his Classic rivals, powering down the stretch for his first attempt at 1 1/4 miles approximately two hours after his aforementioned stablemate got his first look at the seaside oval.