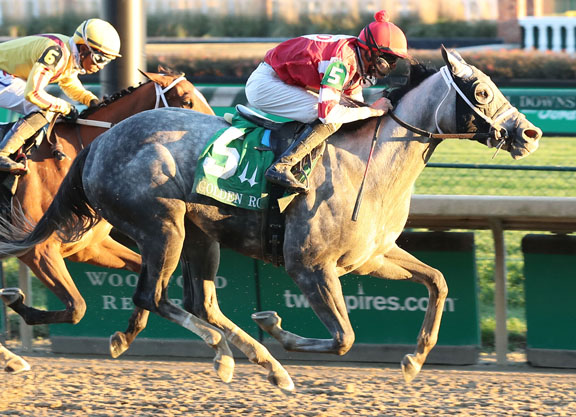 A half-step slow out of the gates and pinched back soon after, Travel Column was last to make the clubhouse turn and was taken hold of by Florent Geroux as Farsighted (Bernardini) took them along at a sensible clip. The $850,000 Fasig-Tipton Saratoga acquisition was slipped a bit of rein at about midway and improved her position into midfield and within striking distance as they hit the turn. Going well as they neared the stretch, Travel Column had absolutely nowhere to go at the three-sixteenths and was carefully maneuvered across three sets of heels to lay down a four-path challenge in the final furlong. Recent debut winner Clariere (Curlin)–the first foal from MGISW Cavorting (Bernardini)–hit the front with time ticking away, but Travel Column had the answers and raced past that one en route to a determined success. Odds-on GI Darley Alcibiades S. heroine Simply Ravishing (Laoban), a close fourth in the GI Breeders' Cup Juvenile Fillies Nov. 6, was also tardily into stride and raced prominently. She took command a fair way out, but was a sitting duck late and could not hang on for a top-three finish.

Travel Column made her first trip to the races on the Kentucky Oaks undercard Sept. 4, sailing home a 4 1/4-length winner of a six-furlong maiden to become a 'TDN Rising Star.' Taking the next logical step in the Alcibiades S. Oct. 2, she missed the kick, sat a midfield trip and made minor inroads late to be third behind Simply Ravishing.

Pedigree Notes:
Travel Column was offered through the consignment of her co-breeder Denali Stud at last year's Fasig-Tipton Saratoga sale, and her hammer price ranked as the most expensive of her sire's 67 first-crop yearlings reported as sold in 2019. The second black-type winner (Frosted's Australian-bred son Ingratiating was a listed winner at first asking at Flemington Racecourse in Melbourne Oct. 3) and first graded winner, Travel Column is a half-sister to an American Pharoah colt that fetched $1.25 million from Speedway Stables to be the second most expensive horse at this year's Fasig-Tipton Selected Yearlings Showcase in September. Swingit is the dam of a weanling colt by City of Light and was bred back to Audible.