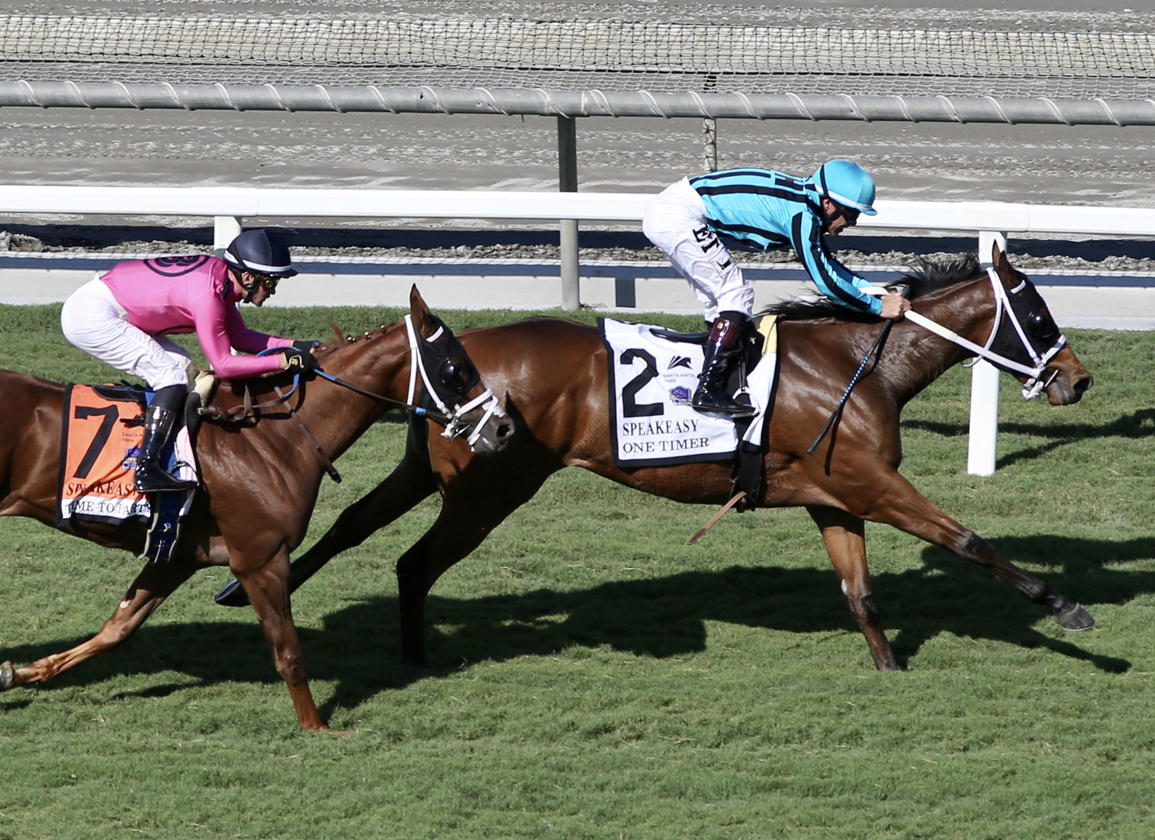 Chicago-based invader One Timer took to the turf Friday to skate into the GII Breeders' Cup Turf Sprint at Del Mar with a guaranteed spot in the starting line-up. A 12 1/2-length debut romper at Arlington back in June over recent GIII Iroquois S. runner-up Tough to Tame (Speightster) and another future stakes performer, the bay paired up 80 Beyer Speed Figures when annexing Woodbine's Victoria S. July 31. He was scratched as a would-be heavy favorite from the Aug. 28 Arlington-Washington Futurity won by stablemate Nobals (Noble Mission {GB}), having shown no published works since before the Victoria, but breezed three times in September over the Arlington all-weather and soon proved he was ready to roll.

One Timer was hustled along between horses by ET Baird to knock heads with favored Forbidden Kingdom. He began to get away from that rival after a :21.01 opening quarter, and looked to be in complete control approaching the straight as Forbidden Kingdom struggled to corner. Time to Party got going and made a race of it late, but One Timer had already built up an insurmountable advantage and glided under the line a comfy winner.

“First of all I want to say the reason that he's name that is because [trainer] Larry [Rivelli]'s son is an excellent hockey player,” said Baird. “He's a hot prospect right now and that's where his name comes from.”

Rivelli's son Dominick plays right wing for the Green Bay Gamblers, a junior team in the competitive USHL, and has committed to Miami of Ohio.

“He broke well, I had to ask him out of there, but he's pretty professional outside of the post parade,” Baird said of One Timer. “He just kept running true. I think he took to the [turf] great. We worked him one time in Chicago [back in July] over the grass and I happened to work another horse, an older horse on the same morning, and the older horse ended up winning a stake after that work, against older horses, but he didn't work that well over it, and this horse worked excellent over it. It pretty much hasn't changed–he just likes to go. I mean, he's competitive, he loves to run.”

The winner is a grandson of GSW grasser La Gran Bailadora (Afleet Alex), who produced 2019 GI Belmont S. winner Sir Winston (Awesome Again). He has a yearling half-brother by Tapwrit and a foal half-sister by Arrogate. Spanish Star, who sold for $275,000 to Crestwood Farm at last year's Keeneland November sale, visited Twirling Candy for 2022.