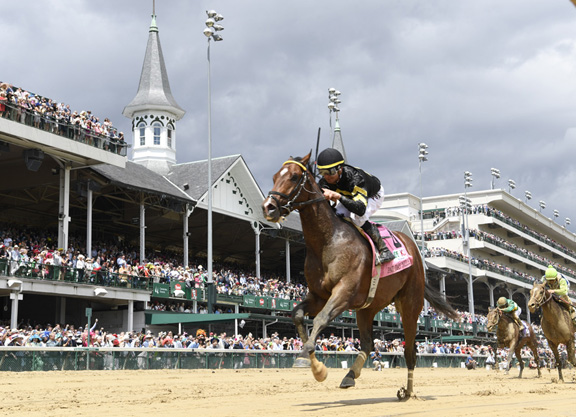 Calumet Farm had won this race when it was the Derby Trial a record seven times in its heyday in the 40s and 50s, and the modern day version of the historic Lexington nursery added to that tally Saturday with a dominant performance from Wild Shot.

Locked on to Uncontested from the two path early as that runner tugged his way through hot splits of :22.24 and :44.79 while traveling somewhat awkwardly, Wild Shot took over with absolutely no resistance past the quarter pole and seemed to relish the conditions as Corey Lanerie kept him to task with a few right handers en route to the wire. Favored No Dozing rallied well to fill out the exacta, while Uncontested held third in a photo.

“I didn't know where I was going to be the first quarter,” Lanerie admitted. “I went in with the mindset to let my horse run his race. I just patiently let him do what he wanted to do. It was a dream ride. When I called on him, he had plenty left.”

Wild Shot was an easy maiden winner second out sprinting here last September the last time he went around a single turn, and was a solid third behind Classic Empire (Pioneerof the Nile) and Lookin At Lee (Lookin At Lucky) in the GI Claiborne Breeders' Futurity at Keeneland in October. He was second to McCraken (Ghostzapper) and ahead of Uncontested in the GII Kentucky Jockey Club S. here in November. The homebred settled for fourth behind McCraken, Tapwrit (Tapit) and State of Honor (To Honor and Serve) in the GIII Sam F. Davis S. Feb. 11, and behind the latter two when third in the GII Tampa Bay Derby Mar. 11. He stopped abruptly to be seventh after controlling the pace in the GII Toyota Blue Grass over nine panels Apr. 8, and clearly appreciated the cut back this time.

“I didn't know we had it, but when he got about three in front at the eighth pole I felt pretty good,” conditioner Rusty Arnold said. “We think this is what he wanted to do–a one-turn mile–and it worked out. I didn't like :44 and change until they kept going, but it worked out great. We tried the Derby trail and we just didn't like the two turns, so we backed him up. His last work was brilliant and he'd done really well. He's a handful, as you noticed in the paddock. He'd been over here every day this week and got better each time. We thought he'd like the slop. We weren't sure, but we thought he would. They went so much faster than I thought they would, but you just don't know on a sloppy track. He kept going and he'd run so fast the horses that chased him tired also. This horse probably will go to New York for the [GII] Woody Stephens on GI Belmont S. Day [June 10].”

Calumet acquired Wild Shot in utero for $55,000 at the 2013 Keeneland November sale. Unraced Ranter is a daughter of GISW Preach, making her a half to top sire Pulpit (A.P. Indy). She has no subsequent produce.