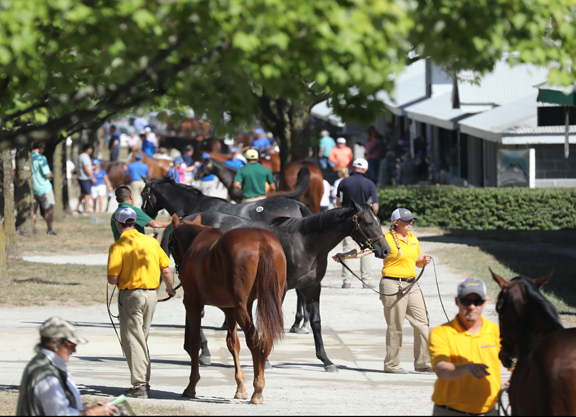 No billion-dollar babies, then. This time last year, the latest breathless advance in its value–up around 8% to just under $950 million–had put the transatlantic yearling market on course for a symbolic breakthrough this year. In the event, however, Jockey Club data published in TDN today shows that the 10-figure mirage has dissolved in 2019 into what was probably a pretty timely 4.5% contraction, down $42,713,595 to $905,622,360.

Timely? Well, the most notoriously inherent weakness of capitalism is that it is predicated on perennial growth. Not, clearly, the most sustainable aspiration. As a result, fiscal management typically seeks to avoid extreme lurches between boom and bust.

The conundrum for an industry like ours, however, is this. On the one hand, its organic, top-to-bottom health would benefit, like any trading environment, from relatively even cycles of growth and recession–above all because the breeding and raising of Thoroughbreds is such a patient business, leaving investment and planning perilously exposed to unstable markets. At the same time, however, bloodstock’s headline indices will reliably be driven up during those super-heated periods when the most affluent are prospering.

And that’s certainly been the case during the decade since the financial crisis–when the wealthiest could gorge first on the cash steroids of quantitative easing and then, in the U.S., on tax breaks for the wealthy.

With all that in mind, it seems no bad thing for the bull run to have abated somewhat. After all, yearlings comprise only one layer of a much wider market. If their value keeps rising, then so will that of weanlings to be pinhooked; and so must that of 2-year-olds, having cost so much more to pinhook as yearlings.

Just because the stakes are constantly inflated, that won’t necessarily be true of the returns. The more you can make from a pinhook, the more you can expect to invest in the first place. That will leave margins pretty much unchanged, with the only difference being the distance to fall if everything happens to go wrong–which, as we all know, can happen at any time with a Thoroughbred.

It’s never easy, of course, to discern precise contours in a landscape as vast as the one contained in the accompanying tables. The combined North American and European markets embrace every yearling to have come under the hammer between Hip 1 at Fasig-Tipton’s July Sale–curiously enough, a May 14 foal, which just goes to show that sweeping presumptions of any kind are best avoided in this game–and the Sixties Icon (GB) colt who made 70,000gns as the final lot through the ring at the Tattersalls December Yearling Sale.

His third dam Indian Queen (GB) won the G1 Gold Cup at Royal Ascot, while his only sibling of racing age this year won four juvenile races between Britain and California. Sixties Icon is by Galileo (Ire) out of an Oaks winner, and this colt’s dam is by another Derby winner in Sir Percy (GB), so good luck to anybody pretending the remotest certainty that he is any less eligible to win at Epsom in 2021 than the most expensive of the 10,648 other yearlings sold either side of the ocean in 2019. (Namely, the 3,600,000gns Dubawi (Ire) colt sold out of Book I to Godolphin in the same ring the previous month.)

Be that as it may, the point remains that the behaviour of the marketplace is far more legible in year-on-year comparison between particular sales. And these had actually given pretty clear notice of trends we might perceive in today’s figures.

For instance, last year’s giddy hike in the gross value of the North American yearling market (up 17.4%) was accurately anticipated by its biggest single marketplace, Keeneland September, which had advanced turnover by around 18%. This time round, the same sale subsided mildly by 4.5%. Once again, that performance proves to have been virtually replicated by the 4.3% dip in the aggregate North American market.

Yearling sales at different levels of the market in Europe similarly laid the ground for an overall contraction. Actually its premier auction, Tattersalls Book I, registered only a 3.8% drop from the previous year’s (seventh consecutive) record, compared with a 4.7% decline across the board. As we keep noting, however, wild growth in the Book I ledger disguises the role of an anaemic sterling since the Brexit referendum. In a market dominated by overseas investment, Book I turnover converted to U.S. dollars was actually lower this year than in 2014, at the prevailing rates. Sure enough, our tables today (likewise given in U.S. currency) show the damage done to the value of the average European yearling–slipping again this year to $78,562, down 12.5% from $89,812 six years ago.

And how about the size of the market? Well, a small drop in the number of yearlings catalogued in Europe was almost precisely balanced in the U.S., meaning that the global tally remained virtually identical. So let’s take a look at how it absorbed demand.

In Europe, 6,864 yearlings were viewed as commercial commodities (i.e. entered for a sale) compared with 6,062 back in 2014. That’s an 11.7% increase. But a weaker clearance rate (after a level percentage of scratchings) translates into 1,882 yearlings whose value could not be realised this year, compared with 1,458 in 2014. That represents a 29% increase in surplus stock. While actually quite an improvement on the equivalent equation in 2018, that still looks like tangible evidence of overproduction.

The clearance rate in America, while historically weaker than in Europe, remains pretty stable. Of far more concern is a steepening rate of scratchings, which rose for the fourth time in five years. In 2014, 13.04% of catalogued yearlings never made the ring. This year, the tally climbed again to 16.89%. In other words, the withdrawal ratio has plunged in that relatively short period to one “out” per 5.9 hips, from one per 7.7 hips.

Whether you think that means sales vets are becoming too powerful, or just more nervous of recrimination, will doubtless depend on your own experience and perspective. But nobody could sensibly conclude that the soundness of the breed might have deteriorated over so short a span of time, so the change has to be in the commercial environment.

Apart from anything else, of course, the rising value of the “average” American yearling must partly reflect the removal of stock at risk of depreciation because of veterinary conjecture. In what is perceived as a rock-solid boom, that looks a pretty dangerous fissure.