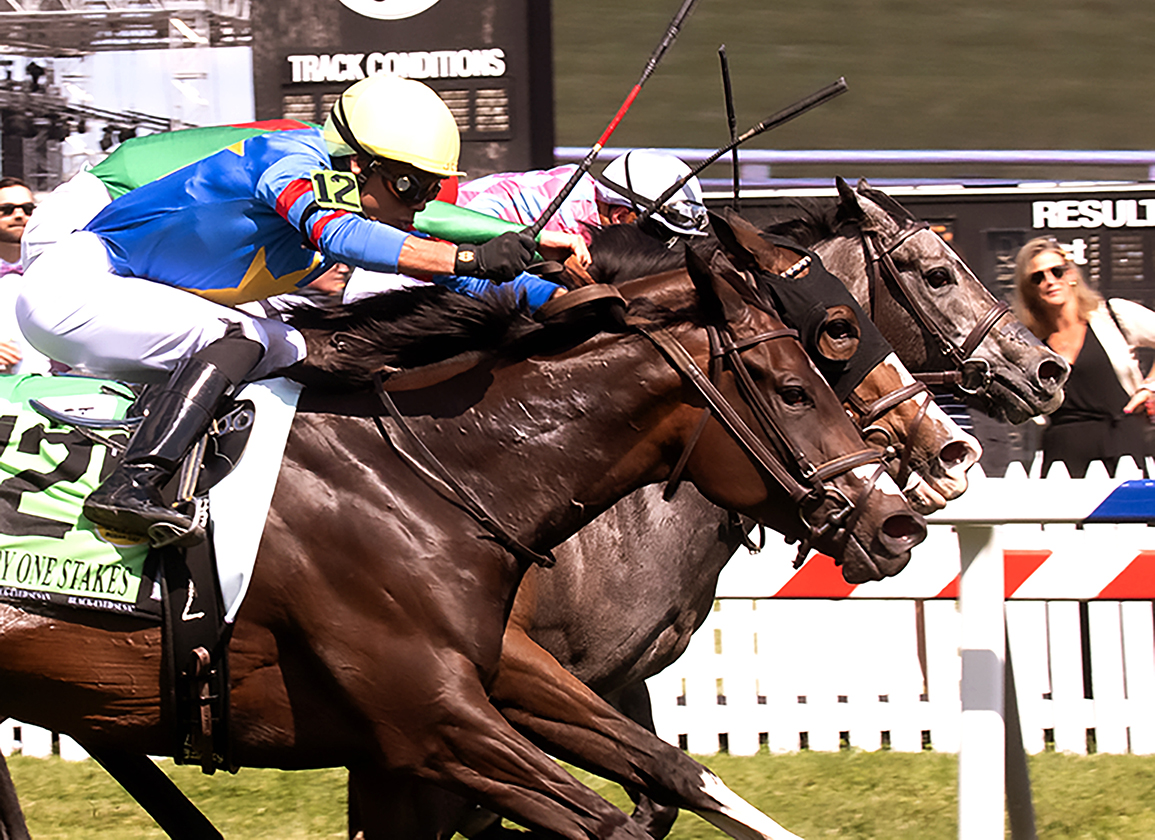 Caravel (inside) gets the bob in The Very One S. at Pimlico | Coady

It's a rare feat to get to the winner's circle on one of the biggest weekends in racing with a horse bred, owned and trained by the same connection, but Elizabeth Merryman did just that when her speedy filly Caravel (Mizzen Mast) gave a gutsy performance at Pimlico to take The Very One S. by a nose on Preakness weekend.

Many would consider the juggling act between the foaling barn and the training center to be an impossibility, but Liz Merryman says for her, it's the best way to produce a racehorse.

“I love working with a horse that has no mystery to what happened before I got them,” she said. “You know everything about them, you know why they do what they do and it's really rewarding. It's my favorite way to train a horse.”

Did last Friday's victory mark Caravel as the most successful homebred Merryman has brought up?

And for the cherry on top, Merryman picked up Caravel's dam for free.

Zeezee Zoomzoom (Congrats), a $135,000 2-year-old purchase out of a dual stakes winner, broke her maiden on the Saratoga turf as a 3-year-old in 2015. After she dropped to the claiming ranks the next year, a bowed tendon ended her racing career.

A friend of Merryman's heard the filly was up for grabs.

“I was looking for another broodmare and my friend called me from Florida,” Merryman recalled. “She said the owners were just looking for a good home for her, either as a riding horse or a broodmare, but she told me she thought the filly would make me a nice broodmare. I looked her up and she had a weird page. There were very few horses on it, but the ones there could really run. All the way down, there were nice, strong broodmare types.”

So Merryman agreed to take the filly and shipped her from Florida to Kentucky, for a date with Juddmonte's Mizzen Mast, and then on to her farm in Pennsylvania.

“I never saw her until she was pregnant with Caravel,” Merryman noted with a laugh.

“She was the only foal I had that year since my other mare wasn't in foal, so she was kind of raised as an only child,” Merryman said. “She always had a great personality and was really nice-looking and correct. I thought she was special from day one, I just didn't know she would be this special.” 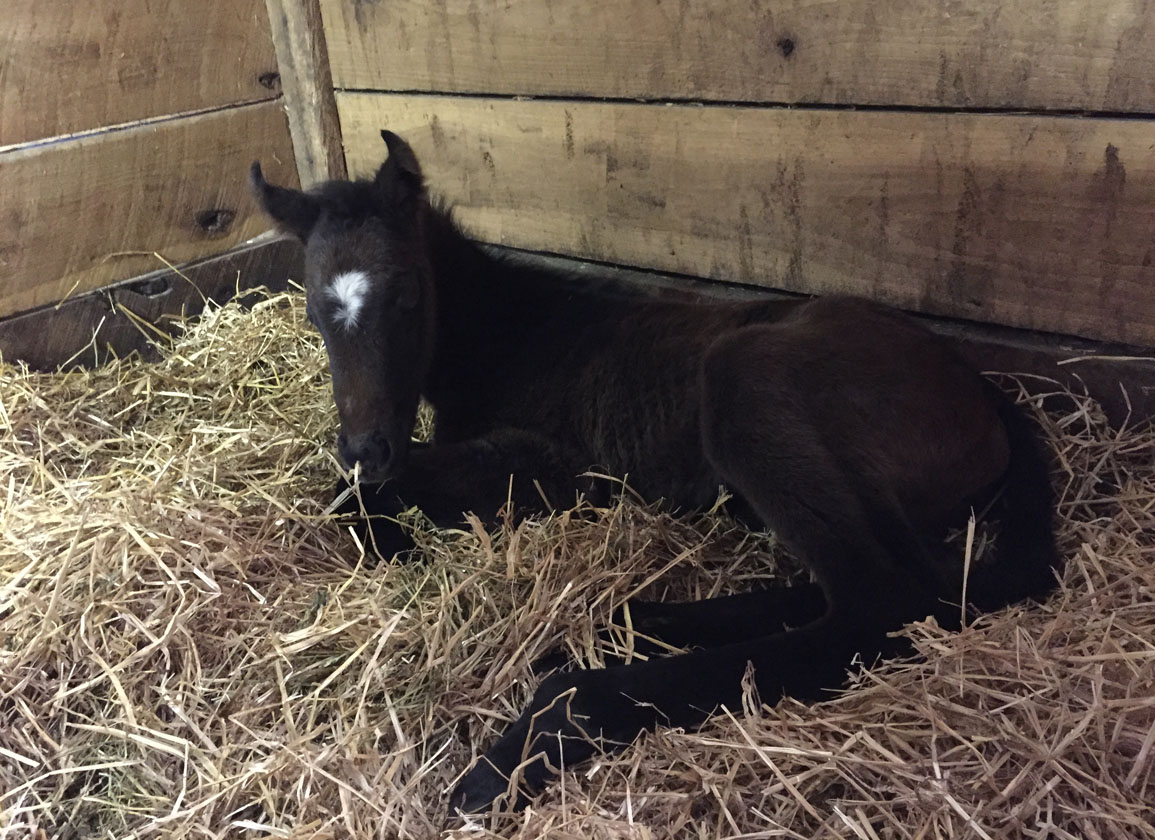 While Merryman said she will occasionally put a foal through a sale, she never considered it with Caravel.

“I really believe if you're going to make a mare, you should keep the first foal and campaign it yourself to make sure it gets every possible chance to prove itself and the family. She was also bred for the grass and she started cribbing early on. I thought she was a fantastic-looking baby, so I didn't want her to be discounted for being a cribbing turf horse.”

Merryman's hopes for the gray filly grew once she started putting in her first works at Fair Hill.

“One day I told her rider to kind of cruise through the lane and two-minute lick the last eighth to see how she goes. I clocked her at 11 flat and I thought, 'You know what? I think I have a runner.'”

Caravel broke her maiden on debut, going last to first over five furlongs of turf at Penn National. She then took an allowance at the same track before claiming her first stakes win in the Lady Erie S. at Presque Isle Downs.

At that point, the Pennsylvania-bred was getting some attention. After a third-place effort in the Hilltop S., Merryman put her in the Wanamaker's October Online Auction.

“I had a lot of people calling me and I thought I should probably cash in on her,” Merryman said. “I set her reserve at $350,000 and she didn't get to it. I wasn't very sorry. She won a stakes a week later.”

Caravel wrapped up her 3-year-old season with a win in the Malvern Rose S. back at Presque Isle Downs.

From the start of her campaign this year, Merryman was shooting to bring Caravel to Pimlico for The Very One S.

“I knew she was going to need a prep race, but everything kept getting backed up at Laurel and there was no allowance for her in New York really, so I thought I would run her in the License Fee S. and that would be a nice prep for her being three weeks out,” Merryman explained.

When bad weather pushed the race back a week, Merryman decided to keep her filly entered, planning to opt out of a trip to Pimlico on Preakness weekend two weeks later and instead wait until Monmouth opened.

But after Caravel's third-place finish in the License Fee, Merryman wavered in her decision.

“When she came out of that race, she seemed like she had really moved forward,” Merryman said. “She didn't come out tired or stiff and she was training happy, so I thought alright, maybe two weeks is going to be fine.”

Merryman grew more confident in the days leading up to the race.

“The week before, I was so confident in her, and I'm never confident,” she said. “I always second guess myself, but I'd never had a horse come into a race like such a monster.”

Caravel settled along the rail for the five-furlong contest and waited for a hole coming down the stretch. It seemed as though she would have no way to get up and would have to fight to get in the money, but in the final strides before the wire, she slipped through to surge forward and get the bob in a nail-biting three-way photo finish.

“I thought she had finished third when she crossed the wire,” her trainer admitted. 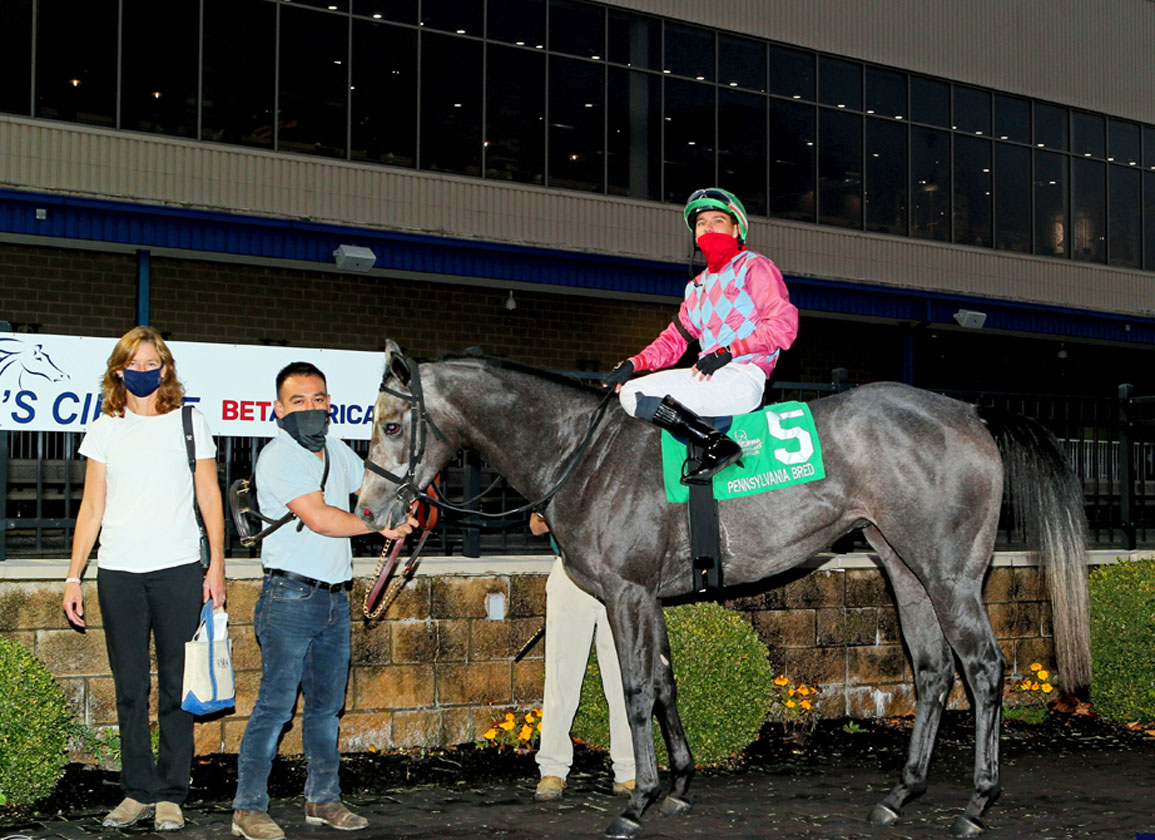 Merryman joins her homebred in the winner's circle for the Malvern Rose S. | Coady

For Merryman, who was born into a prominent racing family and has now passed on the trade to her children, the victory was cause for celebration.

“I had a lot of family there- both my kids, my husband, my sister and her family, and quite a few friends. It was really special and a lot of fun.”

Merryman reports that Caravel came out of the race with flying colors. She doesn't have any set plans for the filly's next start, but is considering options at Woodbine and Belmont.

Caravel's 3-year-old sister Tipsy Chatter (Bourbon Courage) is now in training with Merryman and looking to break her maiden, entered on May 26 at Delaware Park. Their dam also has a juvenile son of Great Notion named Witty, a yearling colt by Holy Boss, and was most recently bred back to Great Notion.

While Merryman admits that Caravel and her siblings are foaled out at another farm, they are back in her hands at three days old. Caravel has not left her owner's care since she first arrived at Merryman's Pennsylvania farm in the spring of 2017.

“We broke her ourselves,” she said. “She's been with us for everything. I love raising them. It's obviously a slow process. Everything goes wrong, there's always sleepless nights, but being able to work with a clean slate, with a horse you know everything about, there's no mystery.”

Merryman said she starts her day later than most at Fair Hill so she can care for her mares and foals before heading to the training center. It makes for hectic days, but it's a process that she has found serves her best.

“I just like to work with horses,” she said. “It's thrilling. A lot of people's lives are pretty mundane and boring. Mine certainly isn't. There's a lot of hard work and drudgery, but there's always something that's going to get your blood up.”