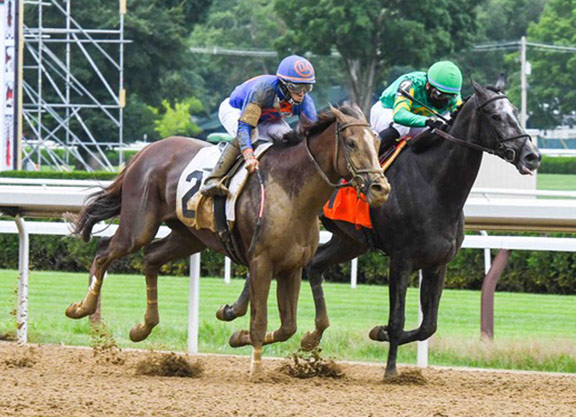 SARATOGA SPRINGS, N.Y.–Just like always, the bell in the winner's circle was rung 17 minutes before every race at the Spa Thursday afternoon.

Even on the most unusual of opening days at Saratoga Race Course, tradition was served. It is Saratoga after all. Phil Linguiti did the honors, yanking the strap that moved the clapper to produce the sound. Linguiti, a former jockey and longtime white cap in the clubhouse, is a familiar figure at Saratoga. Since this 152nd season is racing in Saratoga Springs is being conducted without spectators due to the Covid-19 pandemic, Linguiti wasn't needed in the empty box seats and became the masked bell man for the day.

The bell is a relic to a bygone era at a track that knows bygone well. Legend has it that the bell was used as a signal to trainers to bring their horses from the barns on the backstretch to be saddled under the trees behind the clubhouse. Trainers no longer have to rely on the bell for guidance, but the bell remains. Though the winner's circle is no longer just simply a circle of chalk on the dirt racing surface near the finish line and huge video screens in the infield provide the tote information, fortunately some things don't change at Saratoga.

Linguiti and the bell were a link to the past on a day that a link was welcome. Under overcast skies with a consistent light breeze there was very little connection to even the most low-key racing day at Saratoga in the past 40 or 50 years, certainly not the always-festive opener of the season. With only a small collection of horsemen and essential staff permitted on the grounds, it was eerily quiet aside from the in-house feed of public address announcer John Imbriale. Aside from the time that the horses were on the track, it was easy to forget that the season was officially in session.

While we are accustomed to seeing thousands of empty seats at Aqueduct and Belmont Park and at other major tracks, the sight of a completely empty Saratoga was, at the very least, odd. It's not accurate to call it shocking because we have known for weeks that it had to be spectator-free to be open at all, but it was different. Still, historic Saratoga is open, giving owners and horsemen the opportunity to stay in business and compete. Even though there were no fans in the seats at the track and no action at the windows, the New York Racing Association has a wildly popular simulcast brand that will produce millions of dollars in betting handle during the 40-day meet. It did $19.1 million Thursday.

After Drawing Away Stable's Grit and Glory (Malibu Moon) won the first race, veteran Linda Rice, still the only woman to capture a Saratoga training title, provided some perspective: “It's very strange, but winning is still the same. Whether it's Belmont or Saratoga, it's exciting to win a race. The horsemen, like myself and my peers, are so happy to be back racing. We just need to support the industry. But we really miss the fans. It's just not the same without them, and I sure hope when we come here next year that they are here with us.”

Grit and Glory was ridden by 23-year-old apprentice jockey Luis Cardenas, who for a while had a perfect record at Saratoga Race Course. Winning his Spa debut was akin to hitting a home run in his first at bat in the majors and the smiling Cardenas relished the moment: “This is a dream come true,” he said. “It another check off on the bucket list.”

Cardenas is a native of Peru and has lived in the U.S. for a about a decade. He worked as an exercise rider for a number of years and launched his career as a jockey in December. He said he was injured last summer and spent his recovery time watching races from Saratoga.

“It's exciting. It's my first year here and to win the first race at Saratoga it means a lot to me,” he said. “This is my first time at Saratoga. Even driving here, my heart was pumping really fast.”

Ohio-based trainer Tim Hamm picked up his first Saratoga stakes victory in the GIII Schuylerville S. when Dayoutoftheoffice (Into Mischief) cruised to a six-length victory and paid $41.60.

Hamm said the absence of fans in the stands did not diminish the victory for him.

“We're so grateful as horsemen, and I'm sure everyone in the industry is, just to be here and able to race,” he said. “It doesn't take anything out of it for me. There would probably be a bigger party downtown tonight if it was full of people, but other than that it's great.”

Jockey Junior Alvarado picked up the mount on Dayoutoftheoffice and made the most of the opportunity. He said the empty stands made him appreciate Saratoga even more.

“When you come to Saratoga there are two things you are looking for,” Alvarado said. “One of the main things is to get horses like this, 2-year-olds, nice horses to keep going and win the big races. The second thing is the fans. There is nothing like the fans here in Saratoga. Even when you don't win a race, you come back and people congratulate you still. They give you high fives. They keep your spirit up. That one of the things we are missing and hopefully we won't take it for granted anymore.”

Three-time Eclipse Award-winning trainer Chad Brown is a native of Mechanicville, about 17 miles south of Saratoga, and spent many days in his youth with his family at the track. In 2008, he hit one out of the park, winning with the very first horse he saddled at his home track. Now one of the premier horsemen in the world, he has secured three of the last four Spa training titles. After Country Grammer (Tonalist) gave him a victory in the GIII Peter Pan S., Brown talked about this summer at Saratoga.

“It's really nice to win this race but definitely a bittersweet day when this beautiful place is empty where I grew up,” he said. “We'll try to get through the meet and hold out hope that maybe it will open more during the meet, but there's no guarantees about that. We'll do the best we can and we're grateful they're running here. Hopefully, this is the only year we have to do this.”

The all-sources handle of $19.1 million for the opening day of the Saratoga Race Course spectator-less season was a 21% increase over the $15,754,227 wagered on the rainy opener in 2019. Thursday's handle showed an increase of four percent over the average of the previous five Saratoga openers.