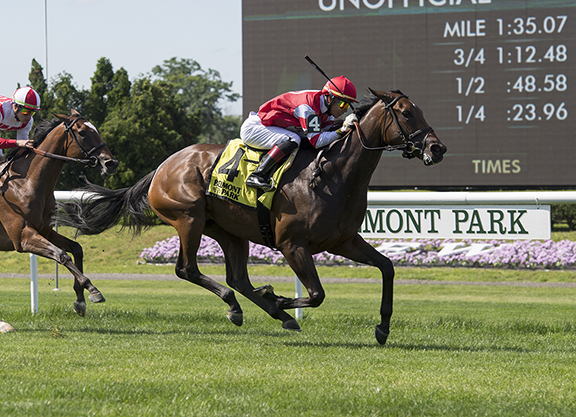 As has become the custom in New York's top turf races, Chad Brown offers a three-pronged attack in Saturday's GI Flower Bowl S., a 'Win and You're In' event for the GI Breeders' Cup Filly & Mare Turf at Keeneland next month. Leading the fray is dual Grade I-winner Cambier Parc (Medaglia d'Oro), victorious in four graded stakes last season–the GI Queen Elizabeth Cup, GI Del Mar Oaks, GIII Wonder Again S. and GIII Herecomesthebride S. Sent off the even-money favorite in her sole start of 2020 in the Sept. 12 GII Canadian S. at Woodbine, the OXO Equine runner finished runner-up behind Rideforthecause (Candy Ride {Arg}). Jockey John Velazquez, aboard for both Grade I wins in 2019, is reunited with the 4-year-old here. Brown is also represented by Nay Lady Nay (Ire) No Nay Never), winner of two of three starts this term, including Monmouth's nine-furlong GIII Matchmaker S. in July. The 4-year-old, who returned to score in Laurel's All Along S. Sept. 7, will be joined by Irad Ortiz Jr. for the first time Saturday.

Flying high following a victory in last weekend's G1 Qatar Prix de L'Arc de Triomphe with Sottsass (Fr) (Siyouni {Fr}), Peter Brant is represented by the French hero's half-sister My Sister Nat (Fr) (Acclamation {GB}). Winner of the G3 Bertrand de Tarragon at Longchamp during her sophomore season, the bay was winless in a quartet of starts at four, however, did hit the board in three of them, including a second in Aqueduct's 11-furlong GIII Long Island S. Nov. 30. Runner-up behind Mean Mary (Scat Daddy) in Belmont's GII New York S. June 27, the French-bred annexed the 12-furlong GIII Waya S. at the Spa Aug. 8. Most recently, she finished second to Civil Union (War Front) in the Sept. 5 GII Glens Falls S.

Riding a three-race win streak, Civil Union, a former Brown trainee, joined the Shug McGaughey barn last fall, debuting for the trainer with a third in a 9 1/2-furlong Gulfstream allowance in January. Breaking through with an allowance score over this course and trip June 21, the Joe Allen homebred added the July 12 River Memories S. over 12 furlongs before her victory upstate. Joel Rosario, in the irons for her latest win, gets back on board this time.

“I think she's a nice filly and she's learned to put it all together,” McGaughey said. “We've been able to space her races in a good way and we'll see if she moves it up the next notch. She'll run as far as you want to run her.”

He added, “Most of the War Fronts like the firm turf. I think she likes this big race track at Belmont, too. She liked Saratoga and ran good there, but I think everything is coming together with her and I'm hoping it comes together Saturday.”