Handle on U.S. Racing Off Less Than One Percent in 2020 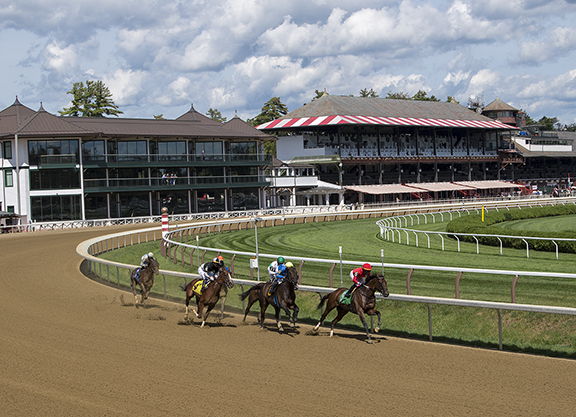 Racing at Saratoga in front of an empty grandstand | Sarah Andrew

Had the Triple Crown races not been rescheduled, it's possible that handle might have risen on the year. The total handle for the three race days combined dropped by $208 million, or more than what handle was off for the entire year.

“The horse racing community is extremely resilient as borne out by the fact that despite the widespread and negative impacts of the coronavirus pandemic, pari-mutuel wagering on U.S. races held steady in 2020 at nearly $11 billion,” NTRA President and CEO Alex Waldrop said in a statement. “We thank both our customers and all of our essential participants on the backside and beyond for keeping the sport going and supporting the industry during what continues to be an unprecedented and challenging period, not only in the United States but around the world.”

The 2020 numbers were largely in line with the amount bet every year since 2011, when $10.77 billion was wagered. Since they have been relatively stagnant. However, the handle figure for 2020 represents a sharp decline from racing's peak year in 2003 when a record $15.18 billion was bet.

The numbers were achieved during a year in which there was a 23.5% decline in the number of races that were run and a 25.38% drop in the number of racing programs that were offered. That was offset by a significant increase in the average amount wagered per race, which was $394,412, for a 29.4% increase over 2019. That could mean that there was little to no growth in the industry went it comes to wagering and that players simply bet the same amount of money that they did in 2019, but spread it around among fewer races.

When the major sports all shut down due to the coronavirus, horse racing had a window where it was the only legal form of sports wagering available and, thanks to its television presence, one of the few sporting events available for viewing. Whether or not racing picked up new customers during that period is open for debate.

“It will remain to be seen what the 2020 numbers mean,” said Marshall Gramm, an economics professor who is also an owner and horseplayer. “I don't know if it's reason to be positive or negative. I'm somewhat disappointed to see that we weren't up on the year. But it's hard to come out definitively to say this was a bad year or this was great year because there were so many factors involved. In many ways, there is some optimism to take  away from this because handle wasn't down as much as you might have thought with the lost days and lost events.”