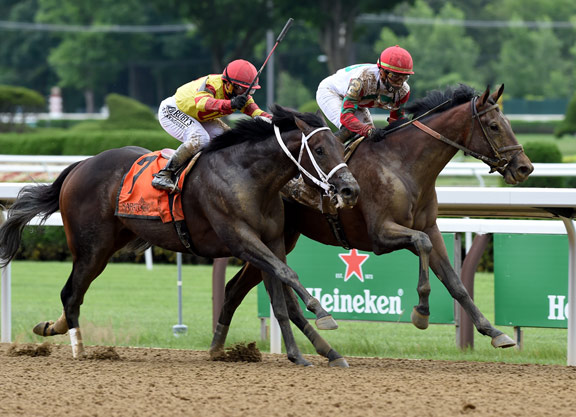 Paul Pompa's Country Grammer (Tonalist) was ultra-game in securing his first black-type score in the rescheduled and relocated GIII Peter Pan S. on Saratoga's opening day Thursday. Saving ground in fourth, the 4-1 shot sat a few lengths off the longshot pacesetter Mo Hawk (Uncle Mo) through a :23.24 opening quarter and closed the gap a bit, moving into third as the half went in :48.13. The bay inched up the fence as 22-1 shot Celtic Striker (Congrats) ranged up outside the leader with Caracaro (Uncle Mo) hot on his heels. Punching through on the fence exiting the bend, Country Grammer was briefly headed by Caracaro, but he quickly wrestled the lead back from his foe and the duo battled to the wire with Country Grammar holding Carcaro at bay by a neck. With its new position on the calendar, the Peter Pan, which is typically a prep for the GI Belmont S. held downstate in May, offered 50 points towards the Sept. 5 GI Kentucky Derby.

“Irad [Ortiz] gave him a beautiful ride,” winning trainer Chad Brown said. “He took advantage of his inside post. He trains that way and he's a bit of a grinder. He's a long distance horse and we've been wanting to get him back out to a mile and an eighth. Additionally, in his last race, this horse has never really trained good at Belmont. We ran him there because that's where he was, but he just didn't like the track that much. He had a nice work over the track here [at Saratoga] last week and we were optimistic he was going to run much better.”

When asked if the GI Runhappy Travers S. Aug. 8 was next, Brown said, “Obviously, the logical thing is to point him to the Travers at a mile and a quarter. I don't think he'll have a problem with the distance. We'll have to see if he's good enough. He hasn't run many times and there's room for improvement there. It's a race we hoped to get him to and I'll talk to Mr. Pompa about it.”

Fourth when unveiled on the turf at Belmont in October, Country Grammer earned his diploma next out with a decisive victory going nine panels on dirt at Aqueduct Nov. 11. Checking in fifth in Gulfstream's GII Fountain of Youth S. Feb. 29, he checked in third behind Tap It to Win (Tapit) in a Belmont allowance June 4.

Country Grammer is the second stakes winner and second graded winner from the first crop of MGISW Tonalist, following the filly Tonalist's Shape. His dam Arabian Song has a now-2-year-old filly named Joyful Cadence (Runhappy), who was purchased by William Simon for $235,000 at Keeneland September, and the mare was subsequently sold to Abdul Aziz Al-Ateeqi for $5,000 in foal to Wicked Strong at the 2018 KEENOV sale. The resulting foal was a filly and is her most recent produce. The winner hails from the family of Group 1 winner Etoile Montante (Miswaki) and MGSW Starformer (Dynaformer).