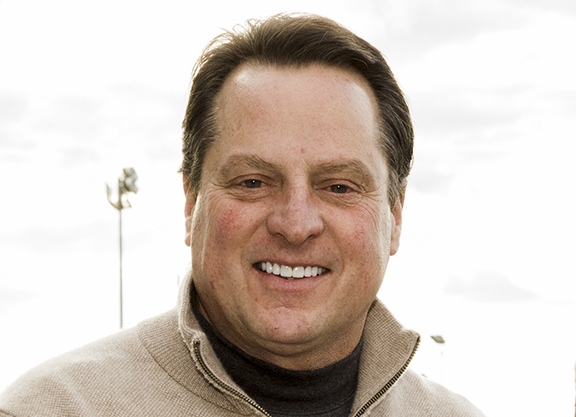 With a newly-minted Grade I winner in his barn and another set to hit the track this weekend, trainer Tom Amoss joined the TDN Writers' Room podcast presented by Keeneland Wednesday morning for an illuminating discussion that covered a wide variety of topics, big and small. Calling in via Zoom as the Green Group Guest of the Week, Amoss explained the success of barn stars No Parole (Violence) and Serengeti Empress (Alternation), talked about what he's learned from branching out into broadcasting and offered his take on why racing has a difficult time catching cheating trainers.

“When No Parole was first making his debut against state-bred company at the Fair Grounds, I recall vividly calling [owner] Maggi Moss and telling her, 'Hey, this isn't just a good Louisiana-bred sprinter, this is a very good racehorse,'” Amoss said. “He's now a Grade I winner, he's undefeated going one turn in four starts. In the back of our minds, if the horse stays healthy and does good, when he gets to the end of his 3-year-old year, where his maturity level will catch up to the older horses, the Breeders' Cup Sprint is a possibility. And of course, we think he'd make a heck of a stallion. He's gorgeous, good looking. He just won an important stallion race [Saturday's GI Woody Stephens S.]. So we've got that on our mind as well.”

“She's run well here, not only in the Kentucky Oaks, but the year before, when she won her first graded stake as a 2-year-old. So all those things led us to want to try this race,” Amoss said. “I've got tremendous respect for the champion, Midnight Bisou, and I know it has to be our best day to beat her. But the game plan is simple. To [jockey Joe] Talamo, I'm simply going to say, 'Make the lead. Make the lead no matter what.' And then that's where Serengeti's heart gets big and she does what she does best, use her speed to try to bury the field. That's a big, big statement when you're going against a champion, but we'll see what happens.”

Amoss has gained attention outside of his training accomplishments for his role as an analyst on the NYRA-produced America's Day at the Races broadcast on Fox Sports 1. He talked about how his impressions of the sport have shifted with his new part-time job and the importance of racing's presentation in the current climate.

“Right now, horse racing has this window to attract some new people to the sport, but no one's going to turn on a show where the talk is so over their head that they can't follow along,” Amoss said. “So I think it's a once-in-a-lifetime opportunity for our industry to present the sport to a group of people that don't know anything about it and maybe get them attracted to it. What have I learned from doing the show? I've learned to watch my words, but not stay silent. If there's something I believe, no matter whose feelings I might hurt, I'm out to tell you what I see and what I observe. So I've learned to have a thick skin as far as that goes, but to say it in the right way.”

Elsewhere on the show, the writers recapped the GI Belmont S. and the breathtaking performance of Gamine (Into Mischief) in the GI Acorn S. and looked forward to another big weekend of racing. In the West Point Thoroughbreds news segment, the crew discussed the developments in fans being allowed on track in some parts of the country and whether or not that will extend to the GI Kentucky Derby. Click here to listen to the podcast and click here to watch it on Vimeo.