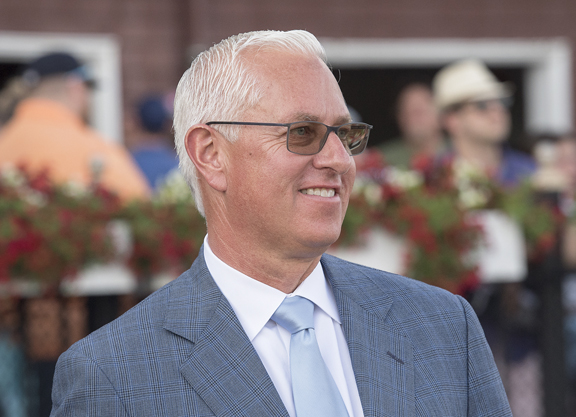 At one point this spring, it was conceivable that soon-to-be Hall of Fame trainer Todd Pletcher would be faced with the unusual situation of not having a GI Kentucky Derby starter. Things change quickly in racing though, as now the seven-time Eclipse Award winner is likely to have four horses in the gate in Louisville and Wednesday morning, he joined the TDN Writers' Room presented by Keeneland to talk about his sudden Derby quartet. Calling in via Zoom as the Green Group Guest of the Week, Pletcher also talked about what still motivates him to train, his early opinions on the Derby field and the progress racing has made on safety since his last appearance on the show following the 2019 Breeders' Cup.

Regarding his one-two finishers in Saturday's GII Wood Memorial S., 72-1 Bourbonic (Bernardini) and 15-1 Dynamic One (Union Rags), Pletcher said, “In Bourbonic's case, it was what I would describe as a pleasant surprise. He's a horse that's always trained well and we did think getting around two turns and up to a mile and an eighth was going to be to his benefit. I'd be lying if I said we expected him to win. The strategy was, let's let him fall back, make one run. He should get the distance and hopefully [be] picking up the pieces at the end, which he definitely was. I can't tell you I had a $40 win ticket on it.

“In Dynamic One's case, we were expecting him to run well. We've been a little disappointed in what he's done so far because he's always trained liked a good horse. I think he's still learning how to run and finish off a race. He got a little bit lost by himself [in the stretch of the Wood]. I think Bourbonic surprised him a bit. But that type of performance is what we've been seeing from him in the mornings to indicate he's of that quality.”

As for GI Curlin Florida Derby winner Known Agenda, likely to be the shortest price of the Pletcher four, he said, “He's a Curlin. He's bred to be better a little later. What surprised us about him was he was able to be competitive in his debut at 6 1/2 furlongs. Off that one race, he was able to beat Greatest Honour at a mile and an eighth, and they were 20 lengths clear of the third horse. In the Remsen, he was still green and was stuck inside on a sloppy track. Once he got clear late, he put in a good final sixteenth. He left himself too much to do. Same thing in the Sam Davis. So I think the blinkers have made a difference. The exciting thing about the group that we have is, I think they're all horses that are going to improve at a mile and a quarter. They're all horses that are truly looking for that distance.”

When Pletcher was last on the podcast, he spoke bluntly about the catastrophic situation racing found itself in after the spate of fatal breakdowns at Santa Anita. Wednesday, he was asked what progress he's seen since then in the sport and what still needs to be done.

“One breakdown is too many, but we also live in the real world where those things happen,” he said. “I think we've made a lot of improvements. The statistics are showing that the numbers are down. Like I said then, it's not a trainer thing, it's not a jockey thing, it's not a track veterinarian thing. It's an industry thing. We have to do better from the ground up. From the time these horses are born, to the way they're prepped for sales, the way they're treated the whole way. It's everyone's responsibility. Ultimately, it comes down to trainers making the decisions at entry time and race time. I think the industry has recognized as a whole that we all have to do better. That's why I think we're making improvements and hopefully are not going to rest on our laurels of doing better. We've got to keep getting better.”

Elsewhere on the show, the writers reacted to a huge weekend of racing, analyzed the prospective Derby picture and, in the West Point Thoroughbreds news segment, reported on an NFT-based virtual racing game that is rapidly growing in popularity. Click here to watch the podcast; click here for the audio-only version.