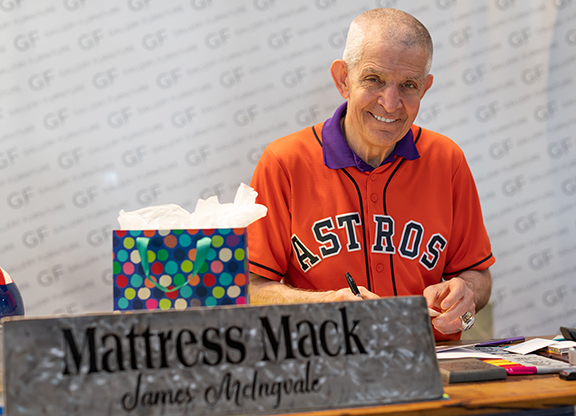 In every crisis, it’s possible to find examples of kindness and generosity, of people reaching out to help total strangers out of the goodness of their heart. To focus attention on the many people in the industry who have stepped forward to help those who have been impacted by the coronavirus, the TDN has launched a series that we hope will put a smile on your face during these difficult times. We’ll do our best to bring you a little bit of good news every day.

As a man known for his magnanimity as much as he is for his local television commercials in the Houston area or owning champion sprinter Runhappy, it was no surprise to anyone to see Jim “Mattress Mack” McIngvale doing his part to help the less fortunate members of his community during the unfolding coronavirus crisis.

Tuesday, McIngvale posted a video on Twitter showing a drive-through area in the parking lot of his Gallery Furniture store where he and employees provided free grab-and-go meals and supplies for thousands of Houstonians. McIngvale has also been arranging for deliveries of food and supplies to the elderly, many of whom are quarantined or isolated because of their high risk for infection.

The tweet had over 3,000 retweets and 11,000 likes in a day, and the replies from the people of Houston were universally gushing. “Build this man a statue,” one said, “Mattress Mack is Houston’s Mother Theresa. Amazing man,” said another. It’s hard to argue, considering the philanthropic impact McIngvale has continually had in the United States’ fourth-largest city.

A heavy donor to charity, McIngvale hosts an annual Christmas giveaway and launched the country’s first Mobile Stroke Unit in conjunction with a local hospital. He gained widespread media attention for opening his stores to displaced victims of Hurricane Harvey in 2018 and did the same for those stranded by Tropical Storm Imelda last year. Now, he’s got the backs of a wide range of coronavirus victims, particularly the elderly and children.

“We asked our customers through email, what could we do to help during this very strange pandemic,” McInvgale said Wednesday. “They said, without a doubt, help the children and seniors. The problem with children is that they’re out of school and so many kids from low-income families depend on school to have lunch. Meanwhile the seniors are locked in and can’t easily get food or supplies on their own.”

With the help of donations from Gallery Furniture’s customers, McIngvale has so far by his estimate delivered prepackaged nonperishable food and toiletries to about 10,000 seniors. At his drive-through food pickup area, where mostly parents come by with children, McIngvale says they’ve helped around 3,000 people a day going on eight days now with scenes of cheerful children blow kisses to McIngvale through their car windows. He also hosted a blood drive last Friday with the Gulf Coast Regional Blood Center at the same location.

“People are frightened, they’re scared, and thank God we can be a light in the darkness for these kids and put a smile on their faces,” McIngvale said.

As for how long McIngvale and his customers will keep this up, despite the unknown duration of the crisis, McIngvale said, “We’re going to keep doing it as long as the pandemic is going. Who knows how long that will be?”

While most of America focuses on the physical precautions that can be taken to stop the spread of COVID-19, McIngvale is also helping people to manage the mental toll of the pandemic.

“You should follow all of the medical advice, avoid crowds, wash your hands, but other than that you should go ahead and lead your life as much as you can, because otherwise the anxiety will overwhelm you,” he said. “My daughter is a trained anxiety specialist and we’re doing a lot of work with that part of it, we have videos on our website to help people with that.”

Assisting in times of desperation and displacement has become synonymous with the name Mattress Mack, and he boils down his worldview into one simple call for action.

“A couple of months ago they had a Democratic debate, and the moderators asked the candidates what their life’s motto is,” McIngvale said. “I thought that was a great question. My life’s motto is we all have a responsibility to our community and to provide for those in need. I’m gonna do that until the day I die.”

Mattress Mack’s grab-and-go lunch station is located at the 6006 N. Freeway Gallery Furniture location in Houston. You can learn more about how to help Gallery Furniture’s community relief efforts here.