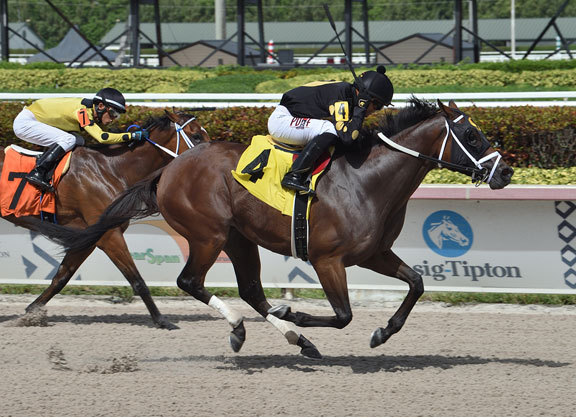 Combination, one of three horses with eight wins in 2020 | Lauren King

Saturday's Claiming Crown races produced a three-way tie atop the North American leaderboard for winningest horse in terms of victories in 2020.

How about scheduling a three-way invitational among these relatively matched geldings to settle the score prior to Dec. 31?

The category of most victories in a season is annually overshadowed by the purse-earnings rankings, which are dominated by high-end horses competing in elite graded stakes.

But the accomplishment of racking up the most wins on the year can be more difficult, because it usually involves keeping a less athletically gifted claiming- or starter-level horse in winning form over a 12-month span.

It's also more intriguing to follow from an “everyman” perspective, because Thoroughbred racing's annual victory leaders are generally overachieving underdogs who are easy to root for.

Combination was first up on Saturday. The Saffie Joseph, Jr. trainee for owner Frank Calabrese already had eight wins on the year and was seeking his ninth in the $75,000 Claiming Crown Express S. at Gulfstream Park. The 4-year-old, who has been claimed six times this year for tags between $8,000 and $25,000 while primarily sprinting in south Florida, tracked the favorite but couldn't power past, checking in third.

Frost or Frippery ran in Saturday's final Gulfstream race, the $75,000 Claiming Crown Iron Horse S. The 7-year-old was claimed once this year, for $20,000 by current trainer Brad Cox on behalf of owner Steve Landers Racing, LLC, back in April, and spent most of this season roughing up optional claiming and starter allowance foes at Oaklawn Park, Churchill Downs and Indiana Grand. He unleashed a furious late bid to spurt clear in deep stretch but was almost nailed at the wire by another onrushing challenger. A tight photo revealed he got a nostril down first, earning win number eight on the year (21st lifetime).

Galerio was not in action on Saturday. He won his eighth race of the year back on Nov. 21 at Laurel Park. The 4-year-old was claimed that day for $35,000 and is awaiting his next start for new owner SAB Stable, Inc., and trainer Dale Bennett.

This trio ranks as tops in the continent. There are nine horses with seven wins right behind them. But none are entered to race in the next few days, so let's assume that only the three currently tied at eight are likely to be in the running for nine wins in 2020.

Might Gulfstream be induced to try and bring them together in a season-ending invitational for winningest horse bragging rights?

Logistically, Combination is already stabled in south Florida, and Cox, the trainer of Frost Or Frippery, is maintaining a division there for the first time this winter.

The connections of Galerio would have to be incentivized to leave Maryland. But he does appear to have a slight class edge based on success against allowance-caliber competition and his $35,000 recent claiming valuation (versus $25,000 for Combination and $20,000 for Frost Or Frippery).

Frost Or Frippery's sweet spot is 1 1/16 miles. Galerio's is a mile. Combination, however, is strictly a sprint specialist at five and six furlongs. Gulfstream's extended backstretch chute would allow for flexibility in carding some middle-ground distance that might bring these three closer together. Perhaps seven furlongs or a one-turn mile? Maybe Combination could get a weight break for being out of his element, distance-wise?

This concept might seem a bit outlandish, but it's not without precedent. In 1997, when I was a member of the Suffolk Downs press box crew, a local gelding named Maybe Jack had 12 wins by December. So did a Finger Lakes-based gelding named Pro On Ice. We proposed an end-of-season match race to bring the two together, and both trainers agreed to participate in the “Showdown at Suffolk” to see who would emerge atop the North American leaderboard with 13 wins.

Concessions had to be made both ways. Maybe Jack had the home-track advantage and preferred two turns but was a closer. Pro On Ice had to ship but was speed-centric, which gave him a theoretical edge in a two-horse race. The purse was $15,000, with $10,000 to the winner (with the track also paying shipping costs for Pro On Ice and hospitality accommodations for his connections). Maybe Jack was weighted at 124 while Pro On Ice carried 119.

“This is good for racing,” Mike Ferraro, the trainer of Pro On Ice, said at the time. “This is not about winning or losing. It shines the national spotlight somewhere else besides the multi-million dollar outfits.”

The late Al Borosh, who trained Maybe Jack, agreed: “This match race grabs people's attention. You can hear that just walking around the backstretch or in the grandstand.”

Maybe Jack pressured Pro On Ice straight from the start and the two raced in lockstep to the eighth pole before Maybe Jack opened up in deep stretch to win by 9 1/2 lengths. The showdown wasn't a blockbuster success from a handle-generating standpoint, but it made a huge splash publicity-wise during an otherwise slow time of the year for the sport.

Match racing has drifted out of vogue in the 23 years since that race took place. But being the owner of the winningest horse on the continent remains a huge point of pride for smaller outfits.

“It just doesn't get any better than this,” said Maybe Jack's then-owner, John Buckley Jr., who at the time was campaigning a three-horse stable. “With the buildup with this race and all the hype, it was my finest moment in the business.”