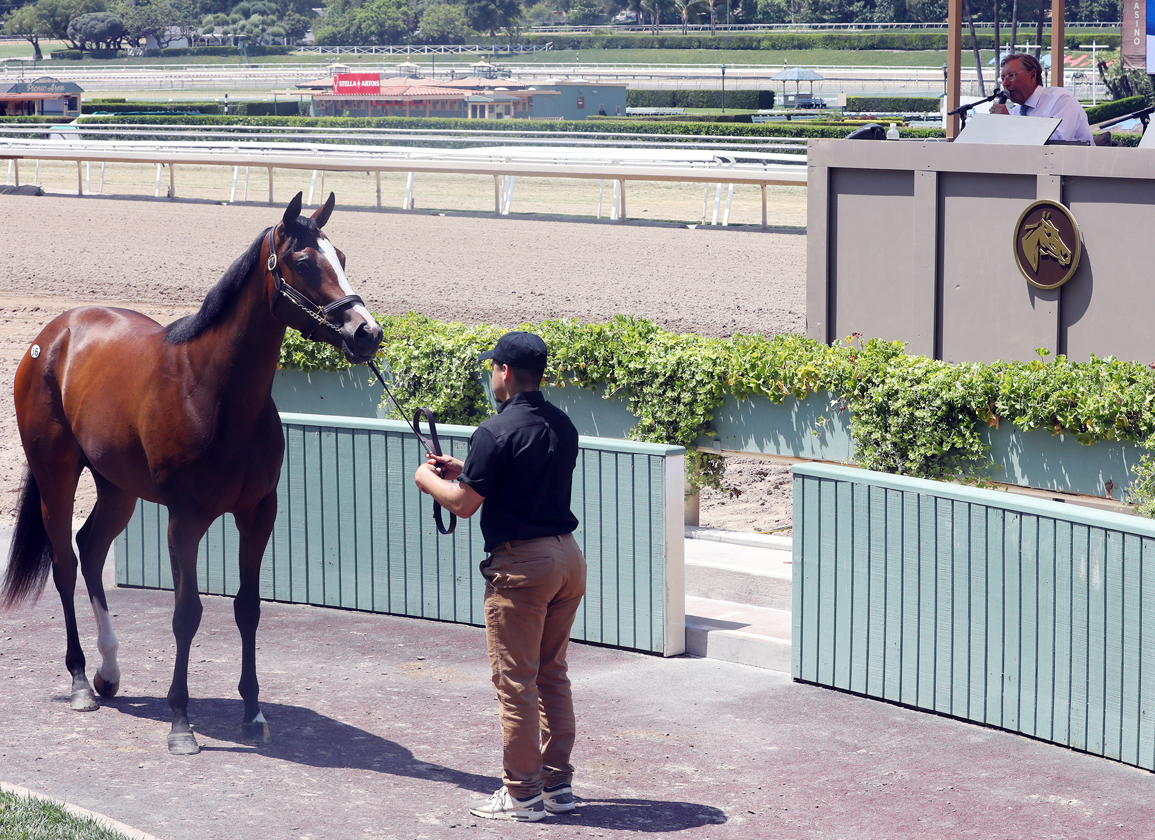 ARCADIA, CA – The Fasig-Tipton Santa Anita 2-Year-Olds in Training Sale returned from its year-long hiatus with a steady, if slimmed down version, Wednesday in Arcadia. A filly by Tiznow brought the auction's top price when selling to Spendthrift Farm for $250,000. The filly was one of eight to sell for six figures during the one-session auction.

“I think we saw today that there is a viable marketplace,” said Fasig-Tipton's President Boyd Browning, Jr. “There were plenty of buyers in attendance at the sale and overall I thought horses sold well and were well received.”

“I'd be lying if I said I wasn't disappointed in the size of the catalogue,” Browning said. “We offered less than 70 horses today and I think, long-term, you have to question the viability of a sale with this number of horses.”

Fasig-Tipton has been stymied by various factors in its attempts to gain traction in the California marketplace. The company conducted its first Santa Anita 2-Year-Olds sale in 2019 against the backdrop of safety concerns and a large number of equine fatalities at the Arcadia track. The 2020 juvenile sale was completely wiped out by the global pandemic.

“We started coming to California in 2019 and obviously the first year we had the racetrack situation at Santa Anita,” Browning said. “They clearly addressed that and made amazing progress on the safety issue, but 2019 was a difficult year to recruit horses under those circumstances. And then you have the COVID year of 2020, so there was no track record to recruit horses, particularly from outside California, to ship here in 2021.”

Browning continued, “I think the California industry has to make a decision whether they want to have a viable sales marketplace or not. We had very little support from the significant California breeders this year. And ultimately, the strength of any sale is based on the quality of product you are able to attract. The local constituents need to make a decision on whether they are going to be supportive of auctions in California or not. We are going to do everything we can in terms of providing customer service and in recruiting buyers and conducting a first-class auction.”

Trainer Carla Gaines went to $250,000 to acquire a filly by Tiznow on behalf of Spendthrift Farm at the Fasig-Tipton Santa Anita sale Wednesday. Consigned by Pike Racing, the bay juvenile is out of Soot Z (Empire Maker) and is a half-sister to graded winner Amalfi Sunrise (Constitution). She worked a furlong in :10 3/5 during Monday's under-tack show.

“I liked everything about her,” Gaines said after signing the ticket on the youngster. “She is fast. And she has a very strong pedigree, with a good first dam.”

Soot Z, who is a daughter of graded stakes winner Bella Chiarra (Phone Trick), has also produced group placed Gotti (More Than Ready) and stakes placed Senatus (Sky Mesa). The mare, in foal to Into Mischief, sold for $800,000 at the 2019 Fasig-Tipton November sale. Her Tiznow filly, bred by Tolo Thoroughbreds and Art Tanaka, RNA'd for $290,000 as a weanling at that same sale.

Of immediate plans for the filly, Gaines said, “We will probably give her a little time. We are talking about giving her 30 days.”

A filly by Maclean's Music (hip 65) will be joining the Southern California stable of trainer John Sadler after West Point Thoroughbreds' Terry Finley made a final bid of $155,000 to acquire the youngster at Santa Anita Wednesday.

“She is a beautiful filly,” Finley said. “We liked her when we saw her. And we liked the work [:10 3/5]. Obviously the stallion has gotten very hot–he's probably going to be a top stallion for years to come. We are very excited about her.”

The bay, consigned by McCarthy Bloodstock, is out of the unraced Bauble (Tale of the Cat), who is a half-sister to Grade I winner Persistently (Smoke Glacken). The mare also produced stakes-placed Royal Story (Lemon Drop Kid). Bred by Merriebelle Stable, the juvenile was purchased by Justin Wojczynski for $39,000 at last year's Keeneland September sale.

“She'll go to John Sadler and we will try to get her to the races as soon as possible,” Finley said. “I'll turn that over to John and his team, they do a pretty good job on that. I think there might a shot to make Del Mar, I hope so, if not we'll get her here [at Santa Anita].”

Of the filly's final price, Finley added, “I wasn't quite sure she would bring that kind of money, but she stood out here. We think we have a good prospect, but you have to pay for good prospects.”

West Point, whose California purchases over the years have included Grade I winner Awesome Gem (Awesome Again) and multiple stakes winner and graded placed Galilean (Uncle Mo), bought three horses during Wednesday's auction. The operation acquired a filly by Holy Boss (hip 99) for $110,000 and a colt by Union Jackson (hip 87) for $42,000.

Best Pal Could Be on Tap for Bochombo

Bochombo (Street Boss) (hip 20), fresh off a runner-up effort in Sunday's Fasig-Tipton Futurity, could make his next start in graded company after trainer Peter Miller bid $150,000 to acquire the colt on behalf of owner Tom Kagele Wednesday at Santa Anita.

“We will get him down to San Luis Rey and go over him and get a game plan which may include the [Aug. 7 GII] Best Pal S. [at Del Mar],” Miller said.

Miller was taking the 'if you can't beat them, buy them' approach with his bidding Wednesday. Bochombo beat Miller's Bet On Mookie (Uncaptured), who returned with a 5 1/4-length graduation on the turf June 11.

“He beat one of my best 2-year-old who came back to win easily on the garss, so I knew the company that he beat was very solid,” Miller explained of Bochombo's appeal. “That really encouraged me.”

Purchased by Sunset Stables for $15,000 at last year's Keeneland September sale, Bochombo RNA'd for $100,000 at the OBS March sale. He broke his maiden in his second start May 23 for Dan Northrup and trainer Luis Mendez and was second behind the impressive Big City Lights (Mr. Big) in Sunday's Futurity. The colt was consigned to the Santa Anita sale by Havens Bloodstock.

“I buy the majority of my horses back east, but I think it's important that we have a viable 2-year-old sale in California,” Miller said. “I thought the sale went very well. I thought the quality was up and I thought there were some very nice horses in there.”