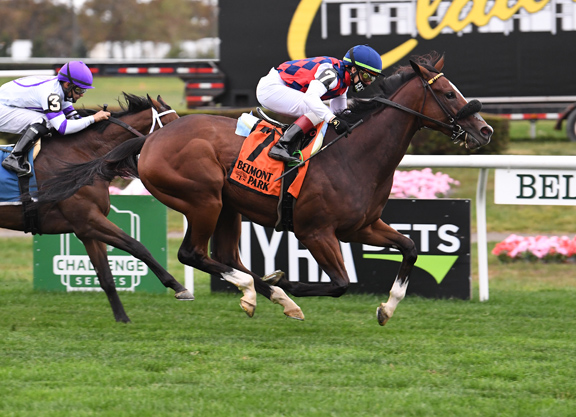 Three Chimneys Farm’s homebred Royal Approval is two-for-two since returning from Royal Ascot followed a determined victory in the GIII Matron S. at Belmont Park Sunday. The 1-2 favorite tracked Union Gables (Speightstown) through a quarter in :22.53 and a half in :46.28. Union Gables attempted to scamper clear in upper stretch, but Royal Approval duly reeled in the scrappy pacesetter late to score going away.

Royal Approval chased stablemate Campanelle (Ire) (Kodiac {GB}) home when second in her debut going five furlongs over the Gulfstream turf May 31. She followed her stablemate over to Royal Ascot where she checked in 17th as Campanelle won the June 20 G2 Queen Mary S. The bay returned stateside to score a 6 1/4-length maiden victory going 6 1/2 furlongs over the Kentucky Downs turf Sept. 9.

The Matron victory has earned Royal Approval a trip to the Breeders’ Cup, according to trainer Wesley Ward.

“We definitely will go to the Breeders’ Cup with her,” Ward said. “I’ll sit down with [Three Chimneys Farm vice chairman] Doug Cauthen and [chairman] Mr. [Goncalo Borges] Torrealba and see just which direction they want to go: the [Juvenile Fillies Turf] or the Juvenile Turf Sprint. Just after talking to Irad [Ortiz], the mile [Juvenile Fillies Turf] might be the better option for her, but again, we’ll sit down and see how she is.”

Ward continued, “As we get a little closer, we’ll have to really watch the weather, as this filly doesn’t handle the soft turf. At Keeneland in the fall, sometimes you’ll get that.”

Three Chimneys purchased Touch the Moon for $450,000 at the 2014 Fasig-Tipton Florida sale. The 8-year-old mare produced a colt by Connect in 2019 and a colt by Will Take Charge this year. She was bred back to Palace Malice. Royal Approval’s third dam, Here I Go, is the dam of GI Kentucky Oaks winner Summerly (Summer Squall).

Royal Approval is the 80th black-type winner and 45th graded winner for veteran sire Tiznow. She is the 15 graded winner out of a Malibu Moon mare. The same cross is responsible for Midnight Bourbon (Tiznow), third in Saturday’s GI Champagne S. and second in the GIII Iroquois S.