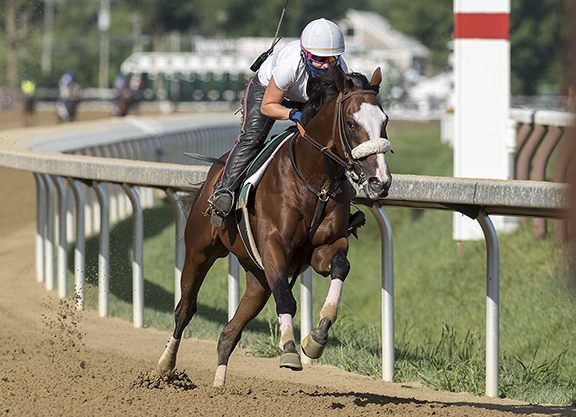 Following a resounding victory in the GI Belmont S., Sackatoga Stable and Barclay Tagg could have easily put their star pupil Tiz the Law (Constitution) in bubble wrap and waited for a run in the rescheduled GI Kentucky Derby. After all, only in this strange year could a team of connections have the benefit of 11 weeks of rest in between the first and second legs of the Triple Crown. Instead, the once-beaten New York-bred star will line up as a heavy favorite in Saturday's GI Runhappy Travers S. at Saratoga as he attempts to go one better than the typical triple and complete the second quest of an unofficial quadruple crown, just four weeks ahead of the Run for the Roses.

Debuting with an easy victory over fellow Empire-breds on this track exactly one year ago, Tiz the Law repeated with authority in the GI Champagne S. before suffering his first defeat when third, beaten under a length, in the sloppy GII Kentucky Jockey Club S. at Churchill in his 2-year-old finale. GIven a brief break, he returned with a three-length success in the GIII Holy Bull S. Feb. 1 at Gulfstream and repeated by 4 1/4 lengths in the GI Curlin Florida Derby there Mar. 28. Backed down to 4-5 against nine rivals in front of an empty grandstand in the Belmont, the blaze-faced bay didn't disappoint, taking over in hand at the top of the stretch and cruising to another convincing triumph.

Saturday, Tiz the Law will get his first test at the Derby distance of 10 furlongs. Since the Belmont, he has drilled five times, the last three breezes going five panels over this track, capped by a :59 4/5 (2/24) move Aug. 1.

The biggest threat to the chalk appears to come in the form of Mike Pegram, Karl Watson and Paul Weitman's Uncle Chuck (Uncle Mo). Bought for $250,000 at Keeneland September, the hulking dark bay didn't debut until June 12 of this year, but was worth the wait, overcoming a slow start and rolling to a seven-length front-running score going a mile at Santa Anita. Quickly stepped up into stakes company, he proved clearly best in the GIII Los Alamitos Derby, a performance that was flattered when runner-up and stablemate Thousand Words (Pioneerof the Nile) returned to upset top Derby contender Honor A. P. (Honor Code) with a 104 Beyer in last week's Shared Belief S.

“He's quick,” said trainer Bob Baffert, looking for his fourth Travers win. “He's a big, tall horse but he's really quick on his feet. He's got a tremendous stride. That's why I thought the mile and a quarter would suit him well. If you can win the Travers, it's a big thing. But Tiz the Law looks unbelievable. I watched his last work and he looked tremendous, so Uncle Chuck will have to step it up. It should be a great race.”

The one-two finishers from opening day's GIII Peter Pan S. will step up in Paul Pompa's Country Grammer (Tonalist) and Global Thoroughbred and Top Racing's Caracaro (Uncle Mo). The former, who fought gamely along the rail to prevail, would give trainer Chad Brown his first Travers score, a victory he has said would be even more significant to him than winning the Derby, having grown up in nearby Mechanicville. The latter, conditioned by Gustavo Delgado, appears to have a bit more upside, after fighting gamely to within a neck in the Peter Pan in just his third career start, first around two turns and first outing since Jan. 11. Caracaro will be piloted by Javier Castellano, who boasts a record six Travers wins.

Rounding out the top contenders is George Hall and SportBLX Thoroughbreds' Max Player (Honor Code). No match for Tiz the Law when third in the Belmont, he nevertheless finished up well in there, getting his last furlong in :11.85, and has a reason to move forward off the race, his first since capturing the GIII Withers S. Feb. 1 at Aqueduct.