Home » Archive » Top News » Tiz the Law in Good Order After Travers Romp, On to Derby

Tiz the Law in Good Order After Travers Romp, On to Derby 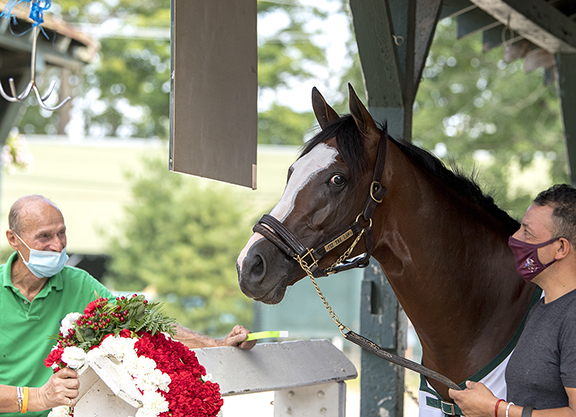 Sackatoga Stable's GI Runhappy Travers S. winner Tiz the Law (Constitution) was bright-eyed the morning after his dominant 5 1/2-length victory in Saratoga's marquee race, for which he received a career-best 109 Beyer Speed Figure. Shortly after training concluded for the morning, trainer Barclay Tagg was at his barn on the Saratoga backstretch standing next to the garland of carnations that had been draped around the now four-time Grade I winner's neck Saturday. Tagg said his star 3-year-old colt was in good order.

“He looks fine,” Tagg told the NYRA notes team. “I was very pleased with the way he ran. He did everything a good horse ought to do and did it perfectly.”

After becoming the first New York-bred to win the GI Belmont S. in 138 years, Tiz the Law became the first horse bred in the Empire State to win the Travers since Thunder Rumble in 1992. Tiz the Law will now point to the GI Kentucky Derby Sept. 5 at Churchill Downs, which Tagg won with Sackatoga's Funny Cide in 2003.

“He seems to terrorize the competition when he makes his move,” Tagg said. “Every race I've seen, even the first one, has been great. He came off that turn, and I thought, 'They're going to run by him like he's standing still' and then I look again and he's three in front. It was the same way yesterday. I thought, 'Get into him, Manny' and he just kept running, running, running.”

Tiz the Law will likely have two breezes prior to the Derby, according to Tagg.

“He'll gallop every day,” Tagg said. “He'll have about 10 days before we breeze him again. We'll probably only be able to get two breezes in him before we go out there. We'll go out there a week ahead of time.”

“He came back very good. He's happy, he ate his food, he's relaxed. Right now, he's sleeping. Everything's good,” Delgado said. “We'll check with the vet and talk with the owners and my son and decide. As long as there's no problems, we'll go to the Derby. Yesterday was a big race, a strong race. I consider Tiz the Law the best horse in the country.”

Third finisher Max Player (Honor Code), who also ran third in the Belmont, has enough qualifying points to be trainer Linda Rice's first Derby starter, but Rice said she would wait a bit to make a decision on the race.

“He came out of it really well,” Rice said. “He's a little tired, but otherwise, he's in good shape. He's continued to improve and taken baby steps forward. So, we were pleased with that. He's been pretty consistent and has been moving forward with gentle progress. We're happy with that. We're certainly going to keep [the Derby] option open. We'll give it a few days and I'll discuss it further with George and Joe De Perio [president of co-owner SportBLX Thoroughbreds] and talk about that later in the week.”