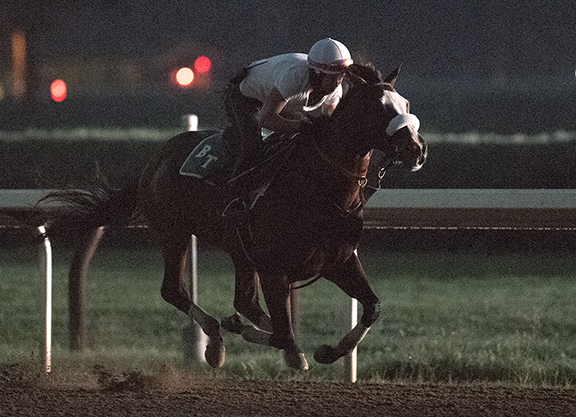 Sackatoga Stable's Tiz the Law (Constitution), a looming prohibitive favorite in the GI Kentucky Derby, recorded his second-to-last breeze before the Sept. 5 Run for the Roses when covering five furlongs in a bullet :59.47 (1/39) over the Saratoga main track Sunday morning. The Barclay Tagg trainee was scheduled to breeze Saturday at the Spa, but had his work pushed back a day after a sudden downpour drastically changed the track conditions.

Working under cover of darkness at 5:30 a.m. Sunday under exercise rider Heather Smullen, Tiz the Law clicked off his three-furlong split in :35 3/5 before galloping out six panels in 1:12 4/5 and up in 1:26 flat (XBTV video).

“It went fast enough, but not too fast,” Tagg told the NYRA notes team. “It was a little quicker than usual, but it wasn't too quick for him. He's a pretty fast horse. I told Heather I wanted a good work in him. I didn't want to set any records out there. I wanted her to keep a good snug hold on him. I wanted a good work.”

The breeze was Tiz the Law's first since romping with a career-best 109 Beyer in the GI Runhappy Travers S. Aug. 8. He is scheduled to breeze once more next weekend before shipping to Churchill Downs.

“This is an important workout. In one way, I don't have any way to make up for it,” Tagg said. “It's the first thing he has done in the last two or three weeks. That's why I needed a good work today. If he goes a little too slow going on top of the race, I wouldn't want that, but I don't want it too fast either. It's going to have to be almost perfect. If it's just like today, that would be fine. I can only work him two times before this race. To me, this work was more important.”

Smullen added that the darkness affected Tiz the Law's focus in the early part of the work before the colt buckled down for the stretch run.

“It was a little dark and he wasn't quite as focused going down the backside,” she said. “He was playing around. At the three-eighths pole, I took my stick out. He stayed nice and straight. I never had to ask him. At the eighth pole, he saw a horse. I didn't have to do anything. He finished up his work. Galloping out, he just kept going. He's good at what he does.”

Elsewhere on the Derby contender worktab Sunday, John C. Oxley's Enforceable (Tapit) drilled six furlongs in 1:12.20 (1/2) Sunday morning at Churchill. Last seen running fourth in the GII Toyota Blue Grass S., the gray worked in the fog under Adam Beschizza in company with stablemate Ghost Fighter (Tapit) and got his final five-eighths in :59.20.

“He's doing extremely well,” said trainer Mark Casse. “This was his last big breeze. They caught him in 12 and 1, but he probably went a little faster because we broke him off at the five and a half and we worked him a sixteenth past the wire, but it was so foggy. The time isn't as important as how well he did it. Adam said he couldn't get him pulled up until the three-eighths pole. He's doing very well and is holding his weight good. I told Mr. Oxley that I don't know where he fits with this group, but we couldn't ask him to be any better than he is right now.”