Tiz the Bomb to Be Pointed Toward Epsom Derby 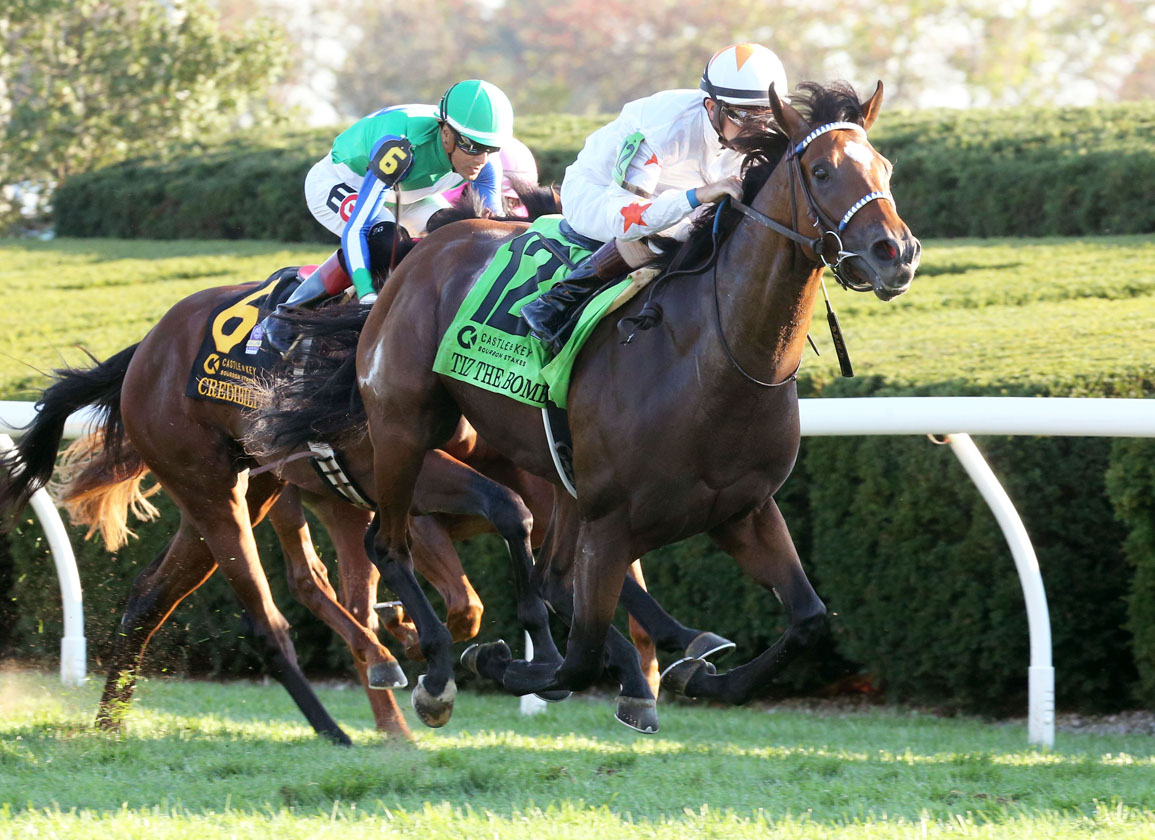 Never afraid to try something different or to think outside the box, trainer Kenny McPeek is preparing Tiz the Bomb (Hit It a Bomb) for a trip to the U.K. that could include starts in the G1 Qipco 2,000 Guineas at Newmarket on Apr. 30 and G1 Cazoo Derby at Epsom on June 4.

The story was first reported by Thoroughbred Racing Commentary.

“Who wouldn't want to win a race like the English Derby?” McPeek said. “It would be special, really special. What was it that Tesio said? The entire breed of the Thoroughbred is judged on one wooden post, the finish line of the Epsom Derby. Is it a trainer's dream to win that kind of race? Absolutely.”

Tiz the Bomb was primarily a turf horse during his 2-year-old year. After the colt broke his maiden on the dirt on July 2 at Ellis Park, McPeek switched him to the grass and he won the Kentucky Downs Juvenile Mile S. and the GII Bourbon S. before finishing second in the GI Breeders' Cup Juvenile Turf.

Hoping that Tiz the Bomb could run well enough on the dirt to merit a look at the GI Kentucky Derby, McPeek entered the colt in the GIII Holy Bull S. at Gulfstream, but did not get the result he was hoping for. Tiz the Bomb finished a distant seventh.

“He didn't handle the dirt in his face in his last race,” the trainer said. “He's a really talented colt, but he didn't handle the kickback. Considering the fact that I have other Kentucky Derby prospects, there's no sense kidding ourselves and trying to force a round peg into a square hole with this horse. If he's a grass horse he's a grass horse.”

Bringing Tiz the Bomb to England to race will require a change in ownership. He has been racing for Phoenix Thoroughbred, LTD., whose founder Amer Abdulaziz Salman is banned from competing at the U.K. racetracks. It has been alleged that Abdulaziz laundered money as part of a scam involving a fake cryptocurrency. He has denied the allegations. McPeek said that he will lease the horse from Phoenix for the U.K. races and that he will race in the name of McPeek's Magdalena Racing.

“We have to pay all the declarations and fees,” McPeek said. “For me, [Abdulaziz] has been a very honorable client. I think he is a passionate and a good horse owner. I don't know the deep dive details of the things he's dealing with. He assures me he's working on it and trying to get things cleaned up. He loves the game. Whether it's in his colors or mine, the horse deserves a chance at races like this. That's my focus.”

The trip to the U.K. will be part of an ambitious campaign McPeek has laid out that will begin with Mar. 5 John Battaglia Memorial S., which will be run in the synthetic surface at Turfway Park.

McPeek said the Apr. 2 GIII Jeff Ruby Steaks, also on the synthetic surface at Turfway, could be next, followed by the trip to Europe and the 2000 Guineas.

McPeek was among the first U.S.-based trainers to test the waters in Europe. In 2004, his Hard Buck (Brz) (Spend a Buck) finished second in the G1 King George VI and Queen Elizabeth Diamond S. at Ascot. In 2017, he sent Daddy's Lil Darling to the G1 English Oaks, but she was scratched after bolting prior to the start.