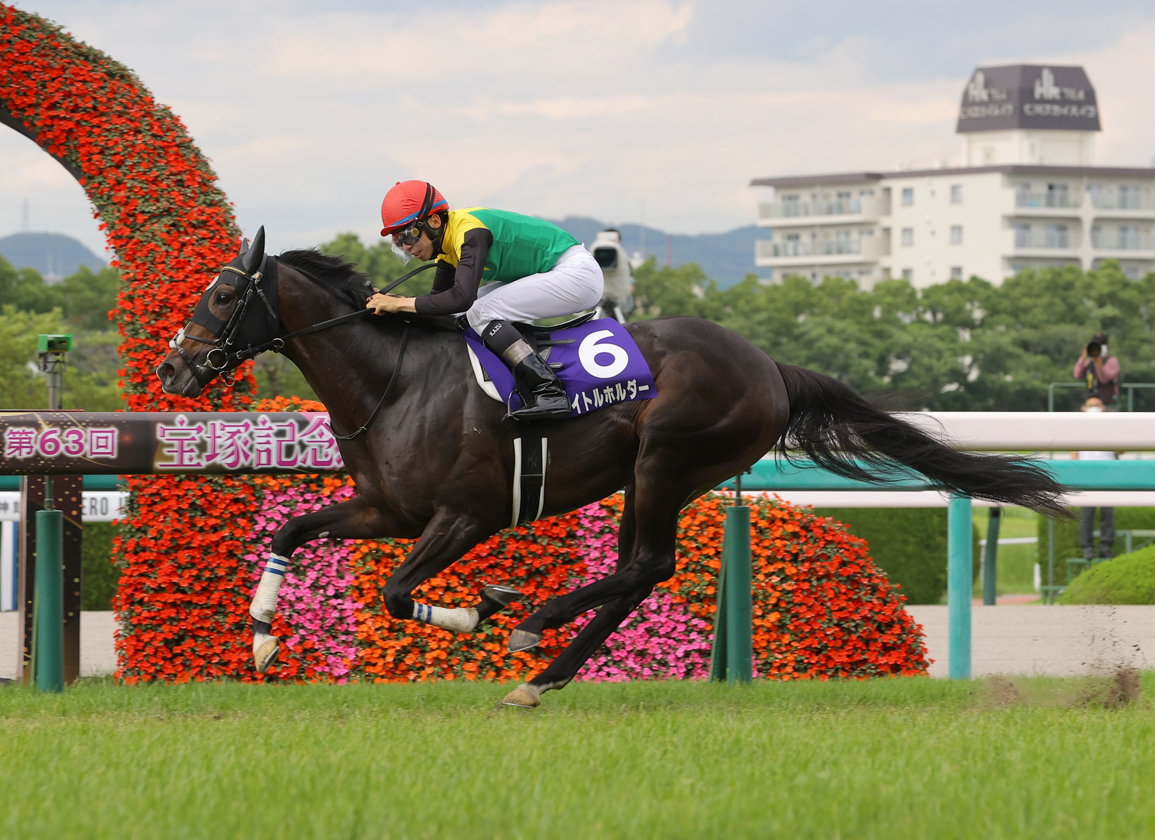 The fan's pick Titleholder (Jpn) (Duramente {Jpn}) lived up to his star billing with a facile two-length victory in Sunday's G1 Takarazuka Kinen at Hanshin, a 'Win and You're In' event to the GI Breeders' Cup Turf later this fall. With the top 10 runners in the 2200-meter event selected by fan voting, the 4-year-old was installed the 3-1 second choice behind Efforia (Jpn) (Epiphaneia {Jpn}).

“This was my fourth race with Titleholder and I knew how the colt could run in good rhythm,” commented winning rider Kazuo Yokohama. “The pace was fast, but I wasn't concerned because he still had enough power left at the straight. He's still in the process of maturing and I think he'll get better going forward.”

Victorious in last season's G1 Kikuka Sho (Japanese St Leger) at Hanshin, the dark bay also took Nakayama's G2 Deep Impact  Kinen and finished runner-up in the G1 Satsuki Sho (Japanese 2000 Guineas) during the 2021 season. He kicked off this term with a victory in the G2 Nikkei Sho at Nakayama in March before returning to his favored surface at Hanshin to triumph in the May 1 G1 Tenno Sho (Spring).

Titleholder becomes the first horse to capture both the Tenno Sho and Takarazuka Kinen in the same year since Deep Impact (Jpn) in 2006.

According to trainer Toru Kurita, “I've been told by the owner that the colt will go to 'the Prix de l'Arc de Triomphe if he wins' so we're planning to send him straight to France with Kazuo.”

Pedigree Notes:
Takarazuka Kinen winner Titleholder went one better than his sire, dual Group 1 winning Duramente, who finished runner-up in the 2016 renewal of the race. The Japanese Derby and 2000 Guineas scorer is also responsible for this season's G1 Japanese Oaks heroine Stars on Earth (Jpn). With only two named foals to her credit, 13-year-old Mowen (GB) (Motivator {GB}) is also responsible for the minor winner Melody Lane (Jpn) (Orfevre {Jpn}), who finished 13th behind her more exalted sibling in Sunday's Takarazuka Kinen.