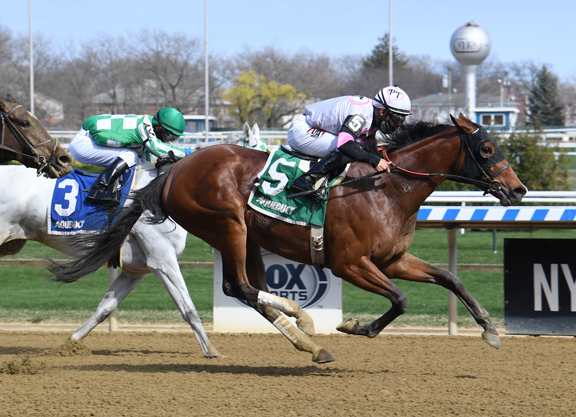 Horologist (Gemologist) aims to collect her sixth career stakes victory in Friday's GIII Allaire du Pont S. at Pimlico. The du Pont returns to its traditional spot on Preakness weekend after being moved to late December because of the coronavirus pandemic.

Transferred to trainer Bill Mott last summer, the New Jersey bred kicked off her tenure with the Hall of Famer with a score in Monmouth's GIII Molly Pitcher S. in July before finishing third in Churchill's GI La Troienne S. in September. Victorious in the Oct. 4 GII Beldame Invitational S., the bay tired to ninth in the GI Breeders' Cup Distaff at Keeneland Nov. 7, but rebounded to take Aqueduct's Top Flight Invitational S. Apr. 10.

“She's a stakes-winner and hopefully we can make her a graded-stakes winner,” Cox said. “She's doing great, and probably is going to get a little class relief. No Letruskas or Monomoy Girls in this group.”

Full of Run Racing's Dreamalildreamofu exits a narrow triumph in the eight-furlong Latonia S. over Turfway Park's all-weather surface in March. A winner on all three surfaces, she is making her graded-stakes debut Fridy.

“Dreamalildreamofu is coming off a synthetic race,” Cox said. “She's performed well on three different surfaces–turf, dirt and synthetic. So, we have options with her.”

Robert and Lawana Low's Spice Is Nice (Curlin) is seeking her first career stakes win in the du Pont, a race her trainer Todd Pletcher won with Pool Land (2006), Super Espresso (2011) and Stopchargingmaria (2015).

Second in Gulfstream's GII Davona Dale S. following a 12-length debut triumph early in 2020, the chetsnut won an optional claiming allowance at Belmont later in July before running sixth the following month in the 10-furlong GI Alabama S., in what turned out to be her seasonal finale. She returned to win a 8 1/2-furlong optional claiming allowance at Keeneland Apr. 9, her first start in nearly eight months.

“She had a nice allowance win at Keeneland. The timing is good for this,” Pletcher said. “She's a nice filly that had a good break and came back well from it. So, we're making the step back into the graded stakes ranks and feel good about the way she is doing.”