Home » Archive » Europe » Time for The Curragh to Seize the Day

Time for The Curragh to Seize the Day 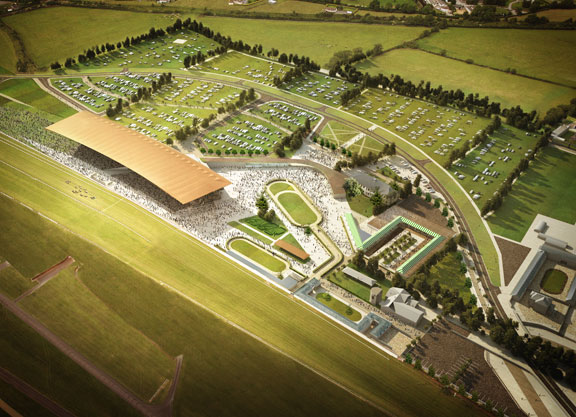 Queen Victoria had a problem–the Prince of Wales, later King Edward VII, had taken a pioneering interest in the merits of Irish fillies. The 19-year-old prince had begun a brief but passionate dalliance with Nellie Clifden, an Irish actress, while he was spending 10 weeks with the Grenadier Guards in Kildare. A concerned Queen decided hastily to arrange a visit to Ireland to check on the future king, and a military procession was ordered on the plains of Ireland's military headquarters, The Curragh.

It was 1861 but The Curragh had a familiar problem–it badly needed a new stand. The Queen's stand was hurriedly erected, and The Curragh military procession formed a centrepiece of an 11-day visit to Ireland. The warm welcome was The Curragh's first marketing coup. In 1868, Queen Victoria's government enacted The Curragh of Kildare Act which preserved the use of The Curragh for horse racing and training forever more.

In a few short months, The Curragh will welcome patrons back, 158 years later, to another new stand. This, make no mistake, is the defining moment of this generation for the Irish bloodstock industry. Costing over €72 million, it now stands as a gravity defying vision and a testament to the support of its investors: Coolmore, the Aga Khan, Eva Maria Bucher-Haefner, JP McManus, Godolphin, the Turf Club and Horse Racing Ireland.

Beyond the glimmering cantilevered venue itself, what has gone under the radar has been the complete overhaul of The Curragh gallops funded by the overwhelmingly generous support of Eva Maria-Bucher Haefner of Moyglare Stud. The stated aim is to return The Curragh training grounds to what they once were and what they should always be: the definitive place to train horses in Ireland.

But build it and they'll come? The Curragh is about to find out. A recent ticket price increase by the Gaelic Athletic Association, Ireland's largest spectator sport (one spot ahead of racing), should cause The Curragh management to take stock. The GAA increased ticket prices by 33% in a sport where 2018 attendance receipts were already down by 14%. The Football Association of Ireland also ended up in crippling stadium debt which is not expected to be repaid until the end of 2020 when their over ambitious plan to sell year 10-year tickets for up to €32,000 fell flat on its face. Cash in or reach out? We do not know yet what approach Curragh management will take. Regrettably, if you wanted to buy hospitality at the new Curragh for your nearest and dearest this Christmas, you would have been disappointed. The Curragh does not release its ticket offerings until Feb. 28.

Ahead of that announcement, it is clear that the Irish public wants and expects value. But what do the investors want from The Curragh development? I'd suggest something very simple: people to go racing. They have invested to protect the legacy of the sport they love in Ireland, not to extract profit from Irish racegoers—that goal is achieved if people come, and continue to come, in increased numbers to The Curragh. Let's hope that Feb. 28 is a date of celebration for racegoers.

To have the masses embark on that journey along the N7, as anyone who has seen Jumps Girls will understand, perhaps The Curragh needs some girl power. Last year due to innovative and committed marketing, the All-Ireland ladies' football final attracted an incredible 50,141 spectators (16,000 more than the 2016 figure). This made it the highest-attended women's sport final in the world. It was also nearly 10 times the attendance for the Irish Derby at The Curragh in 2018 during its redevelopment.

The Ladies Gaelic Football Association (LGFA) sets the marquee example for The Curragh in empowering growth in a minority Irish sport. Helen O'Rourke, CEO of the LGFA, sent a letter to every club prior to the 2018 final that could more aptly described as a rallying cry. It plainly stated a message that should resonate with Irish racing stakeholders: “Increased attendances… at the All-Ireland final, ensure benefits…. right across the board, if we can get more people through the gates of the various grounds, this immediately creates more media attention and makes our product even more attractive to potential sponsors”. It asked that clubs used the day to “build tradition that for all of our members, the All-Ireland finals in September represent an annual trip” and commit to bringing “30 people or more” from each club. The LGFA is acutely aware that a rising tide lifts all boats.

Racing can learn from the collective ownership message of the LGFA in the importance of creating a success story of the new Curragh and the benefits it can bring to everyone. There will be teething problems that initially present themselves (ParisLongchamp may remind The Curragh to build a few more bathrooms) and the challenges outside Curragh management's control (including the worrying trend of Racing TV's inability to show live races on a busy day). However, this should not shake Irish racing from effective planning for what a precious opportunity we have.

The marketing success of the LGFA has sparked a strikingly simple but compelling wider plan for Irish women's sport to which racing should pay attention. The all-inclusive movement 20×20 aims to shift Ireland's cultural perception of women's sport by 2020 with:

This coordinated planning and grassroots-up approach is what Irish racing needs. Why accept regression and stagnation when others see opportunity for sport? In a world of increased urbanisation, if people can't see racing, they won't want to be part of racing. The Curragh needs to reward those who stayed with them during the redevelopment with discounts to the new Curragh. The Curragh needs to reinvent how they engage with a booming Dublin and attract a new generation. Could the railway station that fell into disuse in the early 2000s be revitalised (even Queen Victoria could get a railway built direct to the back of her stand in 1861)? The Curragh needs to see itself for what it now is, a world-class sporting venue, a venue that can boldly attract people to the track. It should not be an ever-diminishing after-thought in the media landscape, but without determined optimistic planning that's what it may become.

Today, the only legacy of the old Curragh that remains is the Queen's Room. Repositioned brick-by-brick overlooking the parade ring to welcome winning connections for generations to come. If you ever get the chance to venture into the Queen's Room, look out the oddly low window. That was so that diminutive Queen Victoria could cast a watchful eye over the Prince of Wales during the procession (and who could blame her for making sure of his whereabouts?). Today's Curragh has its window of opportunity. Let's hope we have the 20×20 vision to grasp it.