Three Jockeys Get $11K in Total Fines for BC Whip Violations 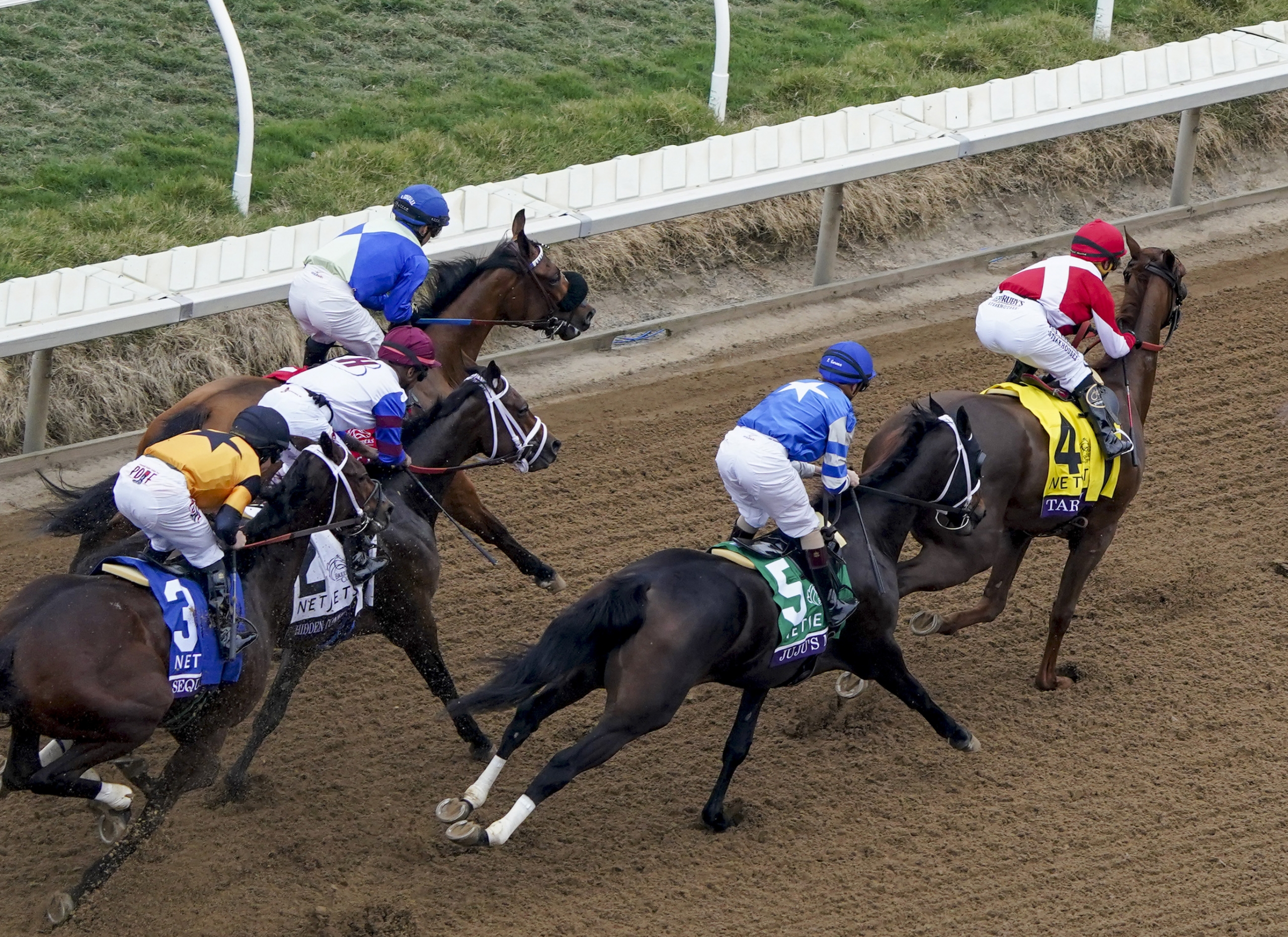 Jockeys Florent Geroux and E. T. Baird were fined $5,000 each by the stewards at Del Mar Thoroughbred Club for exceeding the California Horse Racing Board (CHRB)'s six-strikes-per-race limit on their mounts in Breeders' Cup races.

In addition, jockey Tom Eaves got fined $1,000 for raising his whip above shoulder level prior to a strike.

All of those actions were deemed to be in violation of CHRB Rule 1688, which mandates six-strike, underhand-only, no-more-than-two-hits-in succession whipping with crops that are designed to deliver lower-impact blows.

The two $5,000 fines are the highest levied for whipping infractions at any CHRB-sanctioned track since the more humane whip rules went into effect in the state in 2020.

In fact, they are believed to be the highest fines levied in a Thoroughbred race in North America since the advent of stricter whipping rules in many jurisdictions over the past two years.

Although the rulings posted on the CHRB's website did not specify the exact number of strikes administered by each jockey, Daily Racing Form has quoted the Del Mar stewards as saying Geroux delivered seven hits and Baird nine.

Terry Meyocks, the president and chief executive officer of the Jockeys' Guild, told TDN via phone Monday morning that he believed the fines were excessive and provided another example of why the sport in North America needs a uniform whipping rule.

“Flo [Geroux] has been riding basically the last 14 years. He's a well-respected rider and very accomplished. And then going over [the strike limit by one hit] it's a $5,000 fine? I just think it's over the top,” Meyocks said. “I don't think it's in [anybody's] interest to fine a jock $5,000 for going over the limit once.

With respect to the British-based Eaves, Meyocks said, “You've got to take into consideration European riders. How they ride, it's totally different than the America riders, their style. Going over [the shoulder] and he got fined? It's just [not] common sense here.”

Eaves was aboard Glass Slippers (GB) (Dream Ahead), the defending victress in the GI Turf Sprint. On Nov. 6 she finished eighth in that same race. Eaves has ridden Glass Slippers in 19 of the mare's 20 lifetime races dating to 2018.

The penalization part of Rule 1688 reads: “During a race, if a jockey rides in a manner contrary to this rule, the stewards shall impose a minimum fine of $500. A greater fine or a minimum of three suspension days, or both, can be imposed, if, in the opinion of the stewards, the violation is egregious or intentional.”

Geroux took to Twitter Monday morning, writing a post that seemed to indicate he didn't realize the monetary penalty could be so high.

“I would gladly pay the fine the stewards gave me over the weekend if [jockeys] knew what the fines were going to be,” Geroux stated.

But the Del Mar stewards had made it a point to meet with the riders just prior to the Breeders' Cup to explain Rule 1688 and how they would be enforcing it. And according to Meyocks, the stewards did discuss how high the fines could be.

“I wasn't there, but I think [the stewards] were talking there was much more [in dollar amount] that they could go up to. I heard a number that could be a lot higher.”

When TDN asked Meyocks if he believed that discussion constituted fair warning about the potentially high fines, he said, “Yes. But again, the problem I have with the stewards [meeting with jockeys] at any racetrack [is] all the jocks aren't there at the same time…. That's why it's important to have one rule throughout the United States that's in the best interest of the game.”

In a separate ruling, Geroux was fined $100 for missing the Saturday morning film review that included his Friday infraction.

A CHRB spokesperson said that as of Monday afternoon, no appeals had been filed by the three Breeders' Cup jockeys, who have 72 hours from the issuance of the rulings to contest them.

If the CHRB had not altered its whipping penalty structure back in April, those $11,000 in aggregate Breeders' Cup fines could have been even higher.

In an attempt to discourage riders from disregarding the number of times and manner in which a Thoroughbred can be struck with the whip–particularly if the jockey believed the reward of winning a multi-million-dollar stakes outweighed the cost of incurring a smaller fine or suspension–a previously proposed penalty structure called for docking jockeys 50% of purse earnings if they over-whipped while finishing first, second or third in graded stakes.

But when the Guild and other stakeholders argued in March that going after purse money was too harsh, the CHRB revised that aspect before that part of the rule went into effect.

At that March meeting, CHRB vice chair Oscar Gonzales had said that “this rule is [about] making sure that the upcoming Breeders' Cup goes off [more] smoothly than anything else.” He articulated a concern that the combination of two days of

Grade I stakes and too weak a penalty scheme could create “a wild west type of a situation” in which jockeys openly flouted Rule 1688.

In terms of scale, the only recently comparable whip-related sanction in North America was a $5,000 fine and 20-day suspension levied against a New Jersey harness driver back in June.

Joe Bongiorno was penalized for whipping his pacer so indiscriminately during a Meadowlands race that the judges deemed his actions caused a three-horse spill that injured one rival horse so severely it had to be euthanized. In New Jersey, whipping a horse to make it run faster is prohibited in Thoroughbred racing but permitted with restrictions in Standardbred races.