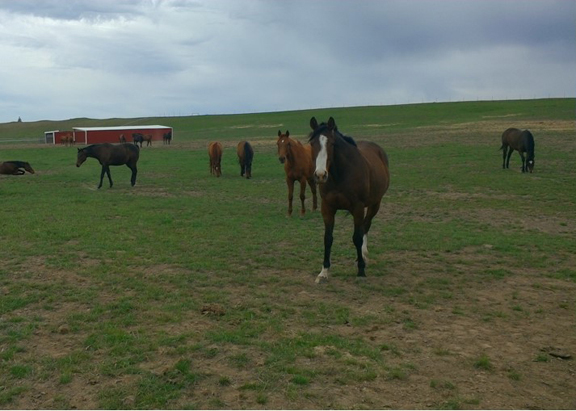 Down The Stretch Ranch

Boone McCanna was one of the leading jockey agents in Northern California, and prior to that in Washington, having represented Kevin Krigger, Dennis Carr, and Frank Alvarado among others. A third-generation horseman, McCanna had a vision to combine the tranquility of the his family's horse ranch outside Spokane, where his father would rest his racehorses in the off-season, with off-track Thoroughbreds and veterans in need of relief from the effects of PTSD suffered while serving in combat.

In 2014, with the help of Jerry and Janet Hollendorfer, Down The Stretch Ranch was founded. Last year, the program adopted out 10 Thoroughbreds and helped 88 veterans and their families. However, the path to success with veterans was not along the route that McCanna had imagined. And the mileposts along the way came from places he would not have expected. The result, however, has been even more rewarding than he could have hoped.

“I was inspired to set up a place for retired horses because that was always how my parents and brother ran their stables,” said McCanna. “They gave the horses time off and they retired them at the ranch. But it was my cousin, Mark Moran, a Vietnam vet who has since died of cancer that he contracted while in the service, who convinced me to set up a program for veterans.”

“Mark had a rough time and lost a leg in combat,” said McCanna. “After he got home, my dad always gave him a few horses to rub at Playfair and it really helped him. He convinced me to find a way to help veterans at the ranch.”

When making the decision to leave California and launch the program, McCanna looked to his network in California racing and found moral and financial support from the industry.

“I wouldn't be here if not for the support of Jerry and Janet Hollendorfer,” said McCanna. “Other trainers, especially Doug O'Neill, are there when I need something and they support our golf tournament. Now, with the help of TAA, CARMA, and TCA, we keep it going.”

Finding veterans to come for help turned out to be the biggest challenge. Many organizations trying to help veterans have had the same experience. McCanna reached out repeatedly to the Veteran's Administration and the local VA hospitals, but because he did not have mental health professionals in the program, he wasn't getting referrals. Then, through a high-school friend, McCanna was introduced to Colonel (Ret) Greg Allen and retired United States Army Lieutenant General Michael Ferriter.

Allen lives in Washington and is a West Point graduate with a masters from the US Army War College and a Green Beret. He served 27 years in the Army. Since his retirement, Allen has dedicated much of his time to helping veterans find the medical care and support that they need. Ferriter, who served three tours of duty in Iraq, is now the president and CEO of the National Veterans Memorial and Museum in Columbus, Ohio. Allen and Ferriter visited the ranch and saw the work that McCanna was doing. Allen began to refer veterans who served under him and were living in the area to the ranch and they saw results.

“I was frustrated that I couldn't get numbers of vets to come out and work with the Thoroughbreds and just experience life on the ranch,” said McCanna. “Even though, I could see the huge change in the people who were coming out, I thought I was failing.”

“Through Colonel Allen, I was lucky enough to meet General Ferriter and he told me that the motto of the armed forces is 'every life matters,' and if I helped one person, then the ranch was a success. That enabled me to relax and focus on the veterans and their families who were there. He helped me see the value in what I was doing. That led to more vets and their families finding their way to the ranch.”

The harrowing and sad stories of what the soldiers endured while on active duty are mirrored by what they faced when trying to find help or just make it through every day after reentering civilian life. Now, McCanna can reflect on the many veterans' lives that he and his platoon of off-track Thoroughbreds have turned around if not saved.

“I've known Thoroughbreds my whole life and they are perfectly suited to this work,” said McCanna. “With the veterans, we focus on the horses' racing careers. I point out each horse and tell the vet about the horse's career. Hearing about a horse's achievements or setbacks as finely tuned athletes helps the vets relate to the horses right away. Then we walk through the fields and the horses swarm us. It usually happens that a horse will pick his veteran rather than the other way around.”

“You can see the change as its happening. The vets relax and then they open up–lots of time its on a trail ride. Then, they start using their skills to help around the ranch and they start to turn their lives around.”

For instance, Justin Martinez is a highly skilled welder. For years, after entering civilian life with debilitating PTSD, Martinez could not support himself or qualify for government assistance.

Colonel Allen brought him to Down The Stretch. He has been repairing things on the ranch and has recently been able to secure employment as a welder.

“One of my favorite stories is about Toruk Matko (Rahy) and Marine Sergeant Jeffrey Smith who lost most of his platoon and had a bad case of what they call survivor's remorse,” said McCanna. “He protects himself by being ornery. On his first day, the only ornery horse in the herd picked him and he wanted to work with that horse. So, I taught him how to catch him and told him to always keep a hand on him and pay attention to his feet.”

During Smith's first session of grooming him, Toruk moved his foot over and stood on Smith's foot. It took several seconds for Smith to move the horse over. McCanna and Smith discussed the event.

“Smith took full responsibility,” said McCanna. “Toruk is still his favorite horse and he often laughs about the time he stepped on his foot.”

The ranch is also well suited to provide some relief to people and families during the COVID19 pandemic. Currently, McCanna is serving the families of men and women who have recently been deployed out of Fairchild Airforce Base. He takes one family at a time to come and stay in the ranch cottage and work with the horses.

“It's safe and beautiful here at the ranch,” said McCanna. “I am happy to give a family that is suffering from having a parent deployed and having to shelter-in-place a chance to escape to a beautiful setting and connect with the horses.”

“There hasn't been a single veteran or group that hasn't said to me thank you and I can't wait to come back,” said McCanna. “It's not me. The horses do their magic every time.”

For more information, or to contact Boone McCanna, go to: http://www.downthestretch.org/