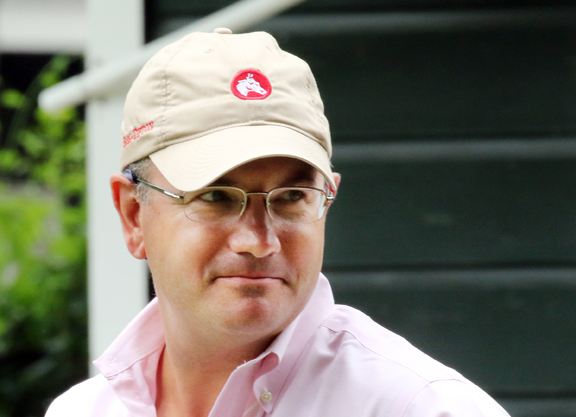 SARATOGA SPRINGS, NY – A year ago, Jonathan Thorne sent a son of Pioneerof the Nile through the sales ring at the Fasig-Tipton New York-bred Yearlings Sale and watched as the youngster sold for a sale-record $600,000. It was a gratifying moment for the longtime New York breeder who has been on the front lines of the evolution of the state's breeding program. Thorne returns to the New York sale with a five-horse consignment in 2019.

“I was just really fortunate enough to breed a horse and raise him and get him to that point and get him here, which is very hard to do,” Thorne reflected on last year's record sale as he oversaw showing at his Barn 5 Friday morning. “That's what all of us up here are trying to do and I was just very lucky to have the right pedigree and the right horse to match the pedigree and everything worked out for the best.”

“I think the horse is with Shug [McGaughey] and doing well, so hopefully he'll do well,” Thorne said.

The 2018 edition of the New York-bred sale couldn't have come at a better time for the state's breeding industry, which was represented by a bevy of top-level performances in the day's leading up to the auction, highlighted by the GI Whitney S. victory of Empire-bred Diversify (Bellamy Road).

In addition to the record-setting yearling, the auction also set new marks for gross, average and median. The competition to better those marks yet again gets underway Sunday with the first of two sessions of this year's New York-bred sale.

“New York racing is in a great spot right now, so all we're trying to do is raise more good horses to compete at the highest level-whether in New York or the rest of the world–that's what we're trying to do,” Thorne said. “But it takes a lot of time and effort to get to that point. I think you're seeing a lot more quality broodmares being brought to this state to take advantage of that program, but it's still a three-year process. You get the mare, then you get the foal and then everything has to go well as a yearling and then a 2-year-old to finally race. I think it's hard to get the momentum going, but the momentum is going right now. I think you're seeing the highest quality New York-breds ever in the last five years and I think that momentum is just going to keep going and it's going to get better and better.”

After the New York-bred yearlings shipped in Thursday, there was plenty of activity at the barns on the first day of showing Friday and there were plenty of the familiar shoppers left over from the Saratoga Select sale earlier in the week.

“All the buyers are coming because they've found really top-notch racehorses here,” Thorne said. “I think most of [the select sale buyers] all stay now. They've been rewarded before and they know there are good horses here, so they stick around. And it's a beautiful place to be. It's the best racing in the world, you have the best jockeys, the best trainers, and the best horses. There is really no other place that you'd want to be.”

Thorne, who has been consigning under the Thorndale Farm banner for over two decades now, brings a five-horse consignment into this year's auction. The group includes three homebreds and a pair of youngsters purchased as wealings at last year's Fasig-Tipton Saratoga Fall Sale.

“I think I've got a great group of horses-nothing with the pedigree I had last year, but the physicals will appeal to most of the buyers here,” Thorne said. “And then we'll just hope for the best.”

Thorne's family traces its roots in upstate New York back 200 years and began breeding Thoroughbreds in 1980. The farm produced graded winners Notebook and Don't Forget Gil and is currently home to a broodmare band of 10.

“We are a commercial breeding operation,” Thorne, who served stints at Gainesway, Eaton Sales and Derry Meeting Farm before going out on his own at Thorndale, explained. “I love to race, too, but I want to build a quality broodmare band, which also takes a lot of time and effort. So hopefully these horses run and make the mares more valuable and then you can breed to better stallions. That's what you always try to strive for.”

Of the pinhooking side of his operation, Thorne said, “It depends on my availability at the farm and how many foals I have. I enjoy doing it and I want to buy weanlings who will fit in this consignment in August. So I just try to buy quality individuals.”

Thorne is obviously a man enjoying what he does.

“I love every part of it,” Thorne said. “I love racing, breeding, foaling, training, I like it all. I really like beautiful horses and I like all of the people who work with them. It's a lot of fun.”