Home » Archive » Shared News » This Side Up: The Elusive Lesson of 'Can't Miss' Sires

This Side Up: The Elusive Lesson of 'Can't Miss' Sires 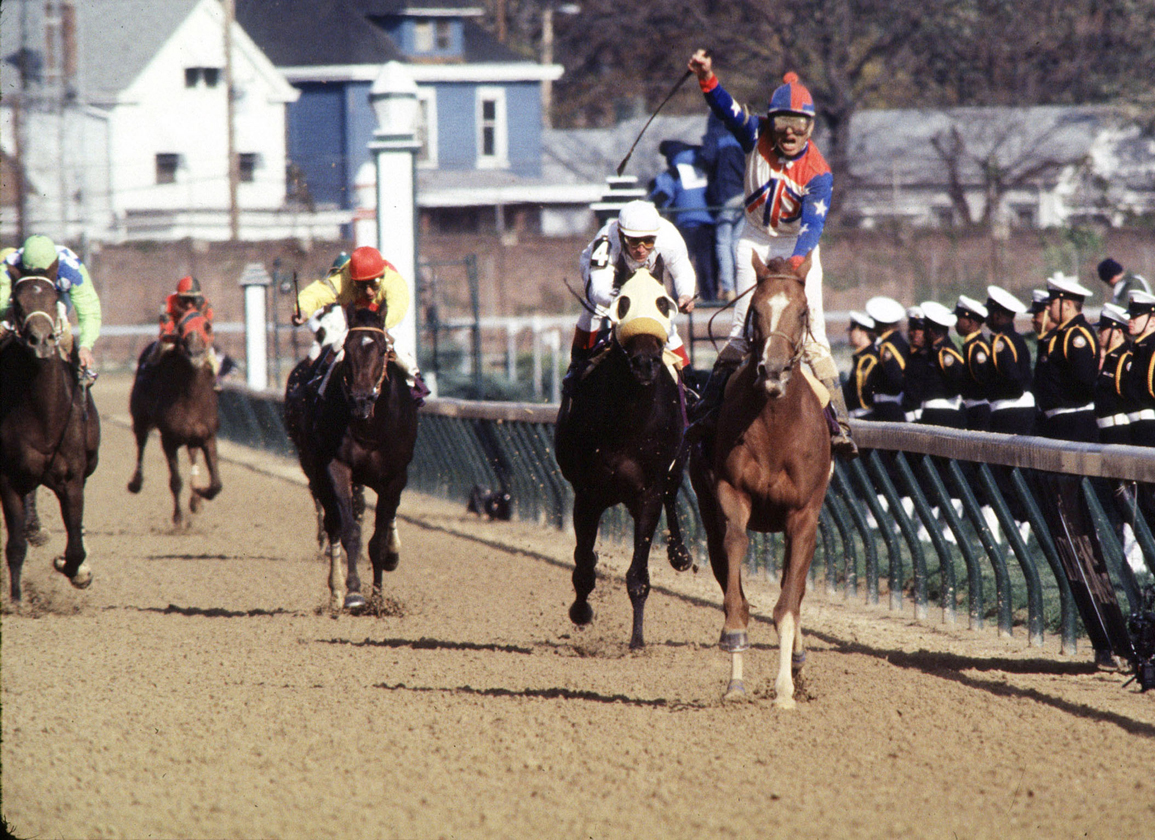 He has trademarked the move, his name reliably invoked whenever a horse picks off his rivals with the kind of flair that luminously separates him from the herd. Yet just about the only time I ever saw one glide through an elite field with quite the same extraterrestrial contempt as Arazi (Blushing Groom {Fr}) in the 1991 GI Breeders' Cup Juvenile was the following May, at the same track, when that nimbus-among-the-shadows exhibition was reprised along the backstretch by a horse called… Arazi.

His discovery of mortal limitations, both in his second season and then at stud, has become so integral to the Arazi narrative that we tend to forget how he maintained the exquisite illusion until suddenly exchanging the wings of an angel for feet of clay at the top of the stretch in the GI Kentucky Derby. (Or, strictly, knees of clay.)

The whole story, with all the symmetrical and didactic properties of parable, came back to me this week on learning of the death of Congaree–a charismatic creature in his own right, who shouldered nearly alone the burden of his sire's honor. For even Arazi's decline on the track could not prepare us for the anti-climax of a stud career that took him ever more forlornly from Newmarket to Kentucky, Japan and even Switzerland.

Congaree, in turn, proved a disappointing stallion. Between Kentucky, New York and Texas, he mustered just 13 stakes winners. That was still two more than dad. Hardly the dividends anticipated from horses packaging so many attributes that any right-thinking breeder would seek to replicate. Congaree, remember, was in training for five seasons; he contested 22 consecutive graded stakes, winning five Grade Is besides placing in two Classics; and his 1:33.11 in the first of consecutive wins in the GI Cigar Mile (a unique distinction) was the fastest dirt mile of 2002. 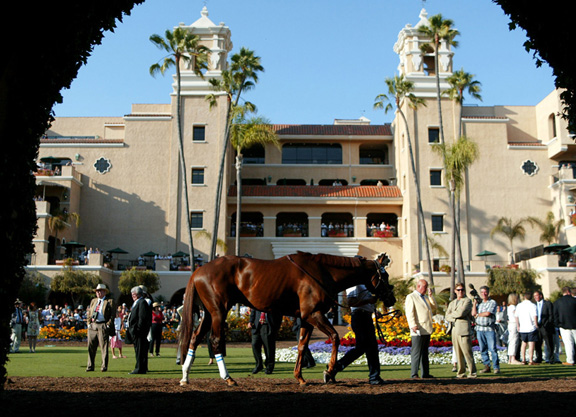 Congaree at Del Mar in 2003 | Horsephotos

It so happens that his loss coincided with my resumption of an annual ritual: a comprehensive survey of the Kentucky stallion market, which we began yesterday and today with newcomers for 2021.

While their track achievements will clearly govern both quality and quantity in their opening books, in principle these horses have all been brought back to a new starting gate. The world is at their feet, each and every one launched with impassioned conviction by farms across the Bluegrass. And while the promotional material sometimes succeeds in stirring only a wholesome scepticism, you always retain in the back of your mind the way Into Mischief or Tapit looked when they first arrived at stud.

Assessing new stallions, some people are credulous enough to buy into ostensibly sophisticated predictive tools. But most horsemen know these shortcuts for what they are. All you can do, at the outset, is weigh the evidence with due vigilance on behalf of the breed. That might not always get you aboard the elevator on the ground floor. But it's better to wait for more tangible evidence, from early stock and runners, than to corral huge books of mares for a new stallion that happens to claim a superficial resemblance to some commercial template.

My instinct, for instance, is that the entire European gene pool will ultimately forfeit its present strength–easily measurable, on turf at any rate, by the recent success of imports to America, whether from the yearling sales or the racetrack–by the opportunist recycling of garbage that catches a plausible glister from a passing sunbeam, and is duly presented as sharing the same, immanent glow of some authentically potent predecessor.

In Britain and Ireland, especially, the most marginal accomplishment in juvenile sprints has become an unthinking formula for the siphoning of mares, literally in their thousands, away from alternatives with at least some eligibility to produce a Classic racehorse. The result is a virtual Classic monopoly for the same blood, often concentrated in the same hands; and a ticking time bomb that will eventually pulverise the European breed to the point that its sharpest horsemen will belatedly recognize a cue for speed-carrying American blood, much as happened with the Northern Dancer dynasty.

On both sides of the ocean, unexpected success for a stallion can launch phony imitations by the dozen. Personally, however naively, I prefer to adhere to the time-honored precepts of pedigree, physique and performance. But even the few stallions that unhesitatingly tick all three boxes bring no guarantees.

Arazi lacked size, of course, but that didn't stop his sire Blushing Groom (Fr) nor his damsire Northern Dancer. There was also a conformation issue, judging from that notorious knee surgery the winter after the Breeders' Cup. Yet it still seemed as though appropriate matings could not fail to draw out the seams of gold in his pedigree.

In counterweight to his damsire, Arazi's top line took the other (Nasrullah) highway to Nearco. There were other striking echoes within his family tree: Native Dancer figured both through Northern Dancer's mother Natalma and Arazi's third dam, who was by Raise a Native; while there was a variegating top-and-bottom footprint for Wild Risk (Fr), as damsire of Blushing Groom and grandsire of Arazi's second dam, who was by Le Fabuleux (Fr).

Wild Risk apart, Arazi's phenomenal talent could not have had a more obvious genetic bedrock: not least through his second dam, whose kinship to many classy performers and producers was crowned by her sibling Ajdal (Northern Dancer), another highly flamboyant European champion. 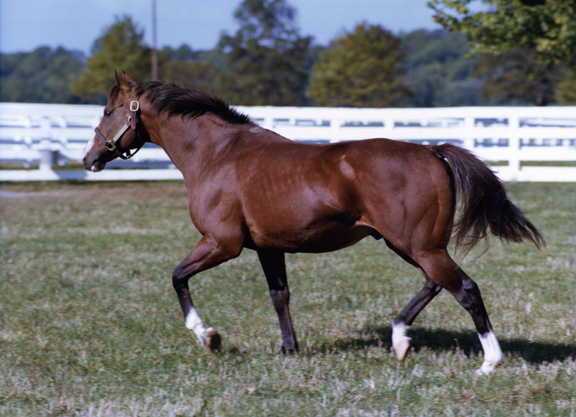 Ajdal, the most expensive yearling buyback in history before his private acquisition by Sheikh Mohammed, certainly went to stud lavishly equipped with the three P's. (Performance was briefly an issue, until he famously dropped from 12 furlongs at Epsom to six in the G1 July Cup)! Sadly, he shattered a leg after a single season at stud, which in those days still translated into just 35 foals. Remarkably, three daughters would go on to produce Group 1 winners.

Congaree, for his part, did have a curious pedigree, loading Northern Dancer 3×3 through his forgotten damsire Mari's Book. But anyone who claims that Arazi's failure was predictable to anyone with the right software is peddling snake oil.

I prefer to view him as another of those lessons in humility so routinely handed out by the Thoroughbred. Ultimately, after all, we're talking about flesh and blood. Happily, in fact, we are still doing so–even as the venerable creature approaches his 32nd birthday. In retirement Arazi has enjoyed exemplary care at Stockwell Farm in Australia, still adored for a performance far more dramatic than anything authored even by Frankel (GB) (Galileo {Ire}), say, with his brutal, pour-it-on style; but essentially given the same respect and attention as we owe to any of these animals that so absorb our dreams, our toil, our craft–animals of uniform nobility, wherever they might rank in performance.

The three P's need to work out often enough to keep our business viable; to keep the rich guy sticking up his hand for seven-figure yearlings at Keeneland or Saratoga. But actually it's their scrambling that makes the whole game function. So long as outcomes sometimes remain unaccountable, whether in success or failure, then we've all got half a chance.

This story was posted in Shared News and tagged Arazi, Chris McGrath, Congaree, sire lessons, sire lines, This Side Up.