Home » Archive » Shared News » This Side Up: The Authentic Potential of Charlatan

This Side Up: The Authentic Potential of Charlatan 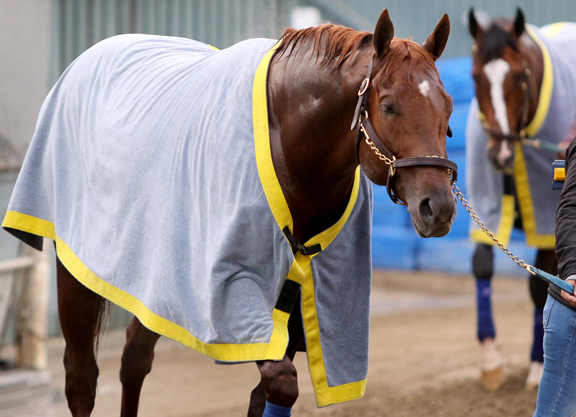 So said the man who instead gave us a means of measuring tremors once they have actually happened, Charles Richter. But how about when an earthquake announces a Charlatan?

Because on the equivalent of the Richter scale, for those who try to quantify a horse’s talent against the clock, a 105 debut Beyer for ‘TDN Rising Star‘ Charlatan (Speightstown) at Santa Anita last month represented a convulsion that brought every other member of his crop crumbling to the ground.

Some even whispered the “J” word, noting that Bob Baffert had introduced another brawny newcomer at his home track two years previously, almost to the day, to clock a 104 Beyer. Now Charlatan has again emulated Justify (Scat Daddy), having stepped up from six furlongs to a mile last weekend to produce an equally gaudy display in allowance company. His time of 1:36.24 pulverised the 1:37.33 set by Ce Ce (Elusive Quality) in the GI Beholder Mile S. half an hour later. If his first start was an earthquake, here was the aftershock.

Whatever happens next, of course, we know that Charlatan’s path has now diverged from that of Justify, who proceeded to exorcise “the curse of Apollo” in the GI Kentucky Derby. This time round, in contrast, Baffert can back off and give Charlatan the chance to mature through the summer in the hope that a Derby of sorts can indeed be staged, as now projected, in September–three months later than when Justify completed his Triple Crown procession in the GI Belmont S., and disappeared for good.

That is just one measure of the historic distortion invited by the Derby’s postponement. But let’s not dwell on that here, and instead examine the roots of a talent that looks well worth waiting for.

At 22, Charlatan’s splendid sire Speightstown has been around for long enough to make us all familiar with the versatility of his stock. In fact, he is an object lesson in the complexity of genetic legacy.

His own metier, on the main track, was unequivocal. Though his fulfilment was seriously delayed by injuries, he was always going to warrant perseverance as a $2-million yearling out of a Canadian champion juvenile. Sure enough, at six he wrapped up a divisional title in the GI Breeders’ Cup Sprint, rounding off a spree highlighted by a share of the Saratoga track record in the Alfred G. Vanderbilt H. (then still a Grade II).

In his second career, however, he has proved a conduit for class in many latent shades: long as well as short, turf as well as dirt.

Yes, he has had his sprinters. Reynaldothewizard, for instance, won the G1 Dubai Golden Shaheen, at the age of seven, moreover, in the process helping to establish Speightstown’s trademark propensity to eke sustained improvement from his stock as they mature. But he has also sired several elite winners round two turns: Haynesfield (GI Jockey Club Gold Cup); Golden Ticket (GI Travers S., dead heat); and, on turf, Force The Pass (GI Belmont Derby Invitational); Seek Again (GI Hollywood Derby); Competitionofideas (GI American Oaks). (Speightstown’s sire Gone West, of course, has himself been a very diverse influence; and likewise another of his sons, Elusive Quality.)

In appraising the likely influence of any stallion, his own track performance very often proves too literal and one-dimensional a guide. Speightstown’s success at stud, including now as a sire of sires, is rooted not in the particular strand that made him lightning fast on the track, but in the mesh of others that he combines. And, as I never tire of saying, if the stairwell of class is unbroken in a pedigree, top and bottom, it doesn’t matter which strand might come through in a particular horse: it will always be class.

Just look at the eight sires seeding Speightstown’s third generation: Bold Ruler, twice; another son of Nasrullah, in Nashua; Bold Ruler’s son Secretariat; Northern Dancer; Native Dancer; and two sons of Tom Fool, in Buckpasser and Tim Tam. Not a hair out of place there. And these copper-bottomed Classic influences, from an era when books were so much smaller, bring their own guarantee of class equivalence in their partners. The mares who introduce these sires to Speightstown’s family tree all had other distinctions–whether on the track, or as producers, or both.

The most conspicuous foreground feature of Speightstown’s pedigree, however, is the way he compounds the distaff influence of Secretariat. Both his own sire Gone West and his damsire Storm Cat are out of Secretariat mares. (Honor Code, who could yet derail Charlatan with his son Honor A.P., is a younger stallion offering a similar package.)

As it happens, Charlatan’s damsire Quiet American is another to duplicate a titanic name, but in a very extreme fashion. For not only are both Quiet American and his sire Fappiano out of Dr Fager mares; these mares are also both granddaughters of the matriarch Cequillo.

Quiet American, whose laurels as a broodmare sire include Bernardini (A.P. Indy) and Saint Liam (Saint Ballado), got Charlatan’s dam Authenticity from a mare by an even greater distaff influence in Deputy Minister. This was the unraced Court Of Appeal, who subsequently produced a useful performer in Brielle’s Appeal (English Channel), a graded stakes-placed, three-time winner from nine starts. But Authenticity was still more accomplished, banking $883,362 in landing the GII La Troienne S. (stakes-record time) and GIII Shuvee H. and placing four times at the elite level for Todd Pletcher and Padua Stables. (She also gained some celebrity as breezing escort to Verrazano {More Than Ready}).

Three days after finishing third to Beholder (Henny Hughes) in the GI Breeders’ Cup Distaff on her final start, Authenticity was sold to Stonestreet for $1.2 million at the Fasig-Tipton November Sale. Stonestreet first sent her to Malibu Moon, producing turf stakes winner Hanalei Moon; and then to Speightstown.

Great to see a farm proving a young mare with properly established sires. And there was due reward when Charlatan was sent to Keeneland September as hip 669, and sold through Denali for $700,000 to a powerful syndicate headed up by SF Racing and Starlight Racing.

No doubt his purchasers were sooner taken with the strapping build of the animal before them, but the fact is that Charlatan’s bottom line links him to some of the most aristocratic names in the American breed. It extends to Betty Derr, a half-sister to the pint-sized gelding Clyde Van Dusen, named for their mutual trainer and winner of the 1929 Kentucky Derby. Betty Derr is the third dam of Courtly Dee, with all that entails (between Arch {Kris S.} and Green Desert {Danzig} and now Covfefe {Into Mischief} etc); granddam of the 1957 Derby winner Iron Liege; third dam of the 1955 winner Swaps; and actually lurks in a similar slot in the background of California Chrome (Lucky Pulpit).

The branch descending to Charlatan takes in three mares bred at Bwamazon Farm, resulting from Millard Waldheim’s purchase of Betty Derr’s daughter Judy-Rae the year after she had foaled Tulle, subsequently dam of Courtly Dee. Mated with Nasrullah, Judy-Rae gave Bwamazon a stakes winner/useful producer in Judy Rullah–whose stakes-winning daughter by Raise A Native, Juke Joint, was bred to the farm’s homebred heavyweight Quack. The resulting filly, though herself undistinguished on the track, produced a dual Grade III winner named Appealing Missy by Lypheor (GB), an interesting stallion who far surpassed his track achievements in a brief stud career. (Sired inaugural Breeders’ Cup Mile winner Royal Heroine and Japanese champion Nippo Teio before breaking his leg in a paddock accident aged 11). And Appealing Missy is the mother of Charlatan’s granddam Court Of Appeal.

That all adds up to quite a deep foundation for the showy flair of Charlatan. All we know, so far, is that he’s very fast. For now he can only be measured by the clock, rather than the caliber of his victims. But his energies are auspiciously contained. There’s brilliance, but economy too.

So maybe he can summon reserves of stamina from Speightstown’s seamless Classic antecedents, and also from the similarly expansive footprint of his damsire. Quiet American, after all, got his Grade I over a mile but got within a nose of siring a Triple Crown winner, while we’ve already mentioned a couple of two-turn champions out of his daughters. (And Charlatan’s dam Authenticity, as already noted, was herself very accomplished over nine furlongs).

For Charlatan, the silver lining to the clouds now looming over our sport is the opportunity to work some serrations into a blade that might have been too slick to glide through the hardened opposition he would have met in early May. That Speightstown tendency, to keep progressing, will only serve him well in the meantime.

It remains very early days, but it would certainly be gratifying if Speightstown could book-end his career with a star to complement the instant luster of his first crop, which accumulated five Grade I winners besides a horse who might have been more talented than them all in Munnings.

WinStar are looking to the future, with the likes of Constitution, but the farm also houses some truly venerable animals, whose collective contribution to the modern breed deserves our gratitude: Distorted Humor, More Than Ready, Tiznow, Speightstown. At a time when our community’s horizons seem so claustrophobic, it’s wholesome to remember how long and patient are the cycles by which they have assembled their living legacy.

The cavalry of Baffert sophomores meanwhile straining at the leash also include Authentic, another effortless dasher. His champion sire Into Mischief has yet to achieve the same reputation for diversity as Speightstown, though maybe that will happen now that his better mares are on stream. How apt, if it falls to Authenticity’s son and Authentic to establish which of them is the real thing.