Home » Archive » Shared News » This Side Up: 'Hometown' Hope Uniting Desert and Bluegrass

This Side Up: 'Hometown' Hope Uniting Desert and Bluegrass 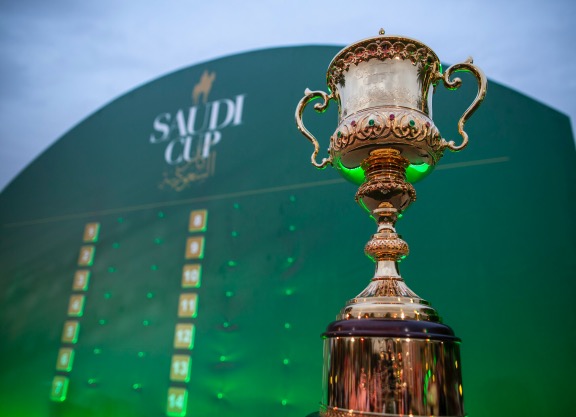 “Build it, and they will come.” Such is the familiar philosophy sustaining the dramatic–sometimes melodramatic–changes in the desert landscape, both physical and metaphorical, over the past generation. Certainly those who first visited Dubai during the early years of its ruling family's commitment to our sport were annually bewildered by the exponential transformation of a cluster of creekside souks and wharves into a teeming, space-age skyline of gleaming towers. Even so, it was still staggering last year to see the Saudis stage a card featuring the richest race in history just four months after sowing a grass course.

We all feel due gratitude for the colossal contribution to our industry, over the years, by investors from the Gulf. At the same time, we understand that exchanges in more significant theaters–diplomatic, political, economic–remain complex and sometimes uncomfortable. As a guiding principle, surely, everyone must welcome the bridging of division through sport. But we must still be wary of conflating shared enthusiasms with the solution of problems that fall beyond our field of operation and, really, way beyond our competence.

To be fair, that cuts both ways. On the one hand, sport can serve as a helpfully open line of communication, at times when parallel interactions feel blocked. But that can only remain a feasible position so long as the integrity of those separate lines is maintained. To millions, for instance, awarding Qatar the biggest sporting event of all–soccer's World Cup–felt more like digging a tunnel than building a bridge.

The thing to remember is that no amount of money can bring people together better than cultural dialogue in a more intimate, human register. Some of you may remember the original Dubai Hilton, which obeyed time-honored precepts of desert architecture: white walls, tiny windows. Nowadays, western visitors stay in steel and glass skyscrapers that make exorbitant demands of the environment. The last time I went, however, I managed to find a guesthouse with wooden shutters and a beautiful shady courtyard; and felt far more disposed, as a result, to engage with and understand a different culture.

All these desert spectaculars will achieve only limited dividends if people just ship in, whizz round, count the money and ship out. Especially as the winners of the inaugural Saudi Cup are still being obliged to view that critical third stage as something of a mirage, on grounds that do not fit very coherently into established international protocols.

That said, we know how horsemen will drop anything and go anywhere if you offer them enough money. This card was launched out of a clear blue sky last year and drew no fewer than 22 individual Grade I winners. As we've noted before, stretching out the campaigns of these elite Thoroughbreds comes at a price: they're putting far more miles on the clock, in every sense, since their traditional winter hiatus was filled by the GI Pegasus World Cup, the G1 Dubai World Cup and now this race in between.

All these new mega-races are pure “Vegas,” offered at inconvenient times and places, but with rewards sufficiently gaudy to seduce many from the cherished destinations of their heritage. Returning with their “Vegas” hangovers, horses now tend to sit out races–like the GI Santa Anita Handicap or GI Hollywood Gold Cup–that long served, to extend the analogy, as the equivalent of a Martha's Vineyard vacation.

For one man, conversely, the first Saudi Cup must have felt more like a homecoming. The death, in the meantime, of Prince Khalid Abdullah renders the return of Tacitus (Tapit) most poignant. We paid due respects to this gentleman at the time of his loss. But the world keeps turning, and such a valuable success for Tacitus would certainly feel like a useful prompt to the Prince's heirs; and likewise the confirmation, last weekend, that he has bequeathed a homebred colt of legitimate GI Kentucky Derby potential in Mandaloun (Into Mischief).

So far as can be judged from the outside, there are encouraging hints of the Prince's own, temperate style in the calmness with which the future of his breeding and racing empire has so far been addressed. For the time being, at least, it remains business as usual. That approach is easier to sustain, of course, when a business–thanks to the skill and patience of its architect, and the team he built–happens to be as viable as Juddmonte.

At the moment, admittedly, there's an obvious contrast between its transatlantic divisions. The Newmarket roster features two of Europe's premier stallions in Frankel (GB) and Kingman (GB), both in their prime and eligible, with luck, to keep thriving for years to come. (Kingman, incidentally, was favored last Sunday for the maiden cover of the Prince's final champion, Enable (GB) (Nathaniel {Ire}). In contrast, the champion who promised similar regeneration in Kentucky, Arrogate (Unbridled's Song), was lost at just 7-years-old last summer in freakish and heartbreaking circumstances. That leaves the stalwart Mizzen Mast once again on his own. As it happens, I'd still call him among the best value in the land, but the fact is that he's now 23.

Hopefully the Prince's family understands how vital he considered his American bloodlines; and also the fulfilment he derived from the great American race days. Tacitus himself, of course, is out of five-time Grade I winner Close Hatches–whose sire First Defence was homebred from Honest Lady, herself one of four Grade I winners out of Juddmonte's storied matriarch Toussaud (El Gran Senor). If the Prince could now ask any favor of the racing gods, then, I'm sure one of his priorities would be for Mandaloun, Tacitus and others to give renewed impetus to his Kentucky farm.

So whatever patriotic satisfaction the Prince might have discovered in a hometown success for Tacitus, he would also hope that any success for his American racetrack division be viewed, first and foremost, as a means of enabling his Bluegrass team to extend decades of excellent service. Because, albeit in an understated way, he built his sporting bridges by a very human connection. And that's one reason why those stretching from the sands of his homeland, all the way to the lush pasture of Kentucky or Suffolk, were built to last.