Home » Archive » Shared News » This Side Up: Breeders' Cup Hits Pay Dirt at a Mile

This Side Up: Breeders' Cup Hits Pay Dirt at a Mile 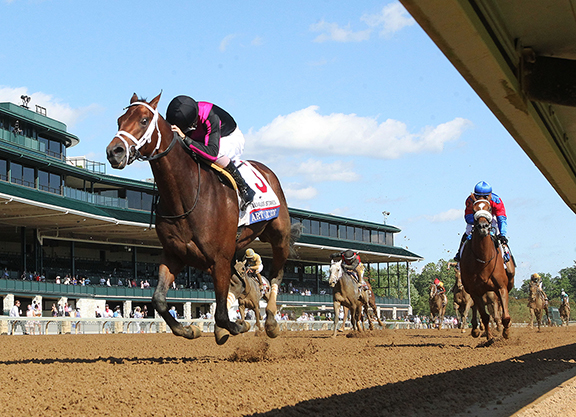 Less is more, they say. Don't worry, that's not a facetious observation on the counting of votes. It's just that some of us still feel that the expansion of the Breeders' Cup into a second day, in 2007, somewhat diluted its trademark intensity.

A couple of years previously they had faced a similar calculation, in Britain, about adding a fourth day to the Cheltenham Festival: would the guarantee of another lucrative full house, at this phenomenally popular climax of the jumps season, represent a legitimate trade-off for the inevitable erosion of quality? Purists said no; the accountants said yes. You can guess whose reckoning proved decisive.

The one thing to avoid, in both cases, was to give the best horses any excuse to avoid each other. Partly to that end, no doubt, the Breeders' Cup focused much of its innovation on grass. This can be viewed in two ways. On the one hand, the series duly embraced a discipline that has meanwhile continued to thrive domestically. At the same time, however, it offered European horsemen a pretext for renouncing the spirit of adventure that had produced so many unforgettable moments on the main track.

It so happened that the first two-day meeting was also the one that left such a deep scar on the European psyche, through the grotesque loss of George Washington (Ire) (Danehill) in the Monmouth slop. If that experience heightened appetite for the synthetics experiment, then the staging of the next Breeders' Cup on such a surface, at Santa Anita, had quite the reverse effect on indigenous horsemen. Suddenly the Europeans were being invited to make hay not only in a bunch of new grass events, but in “dirt” races that were barely less congenial.

One way or another, there has clearly been a retrenchment since. That's a topic for another day. What I'd like to address instead is the impressive way in which one particular race–the Big Ass Fans Dirt Mile–has evolved since two of its first three editions were staged, paradoxically enough, on something so akin to turf.

Back then, it felt like a consolation prize for horses on the periphery of the elite. As we approach the 14th running, however, it has matured into a bona fide Grade I with a promising record, already, of producing stallions. On Saturday, indeed, Mr. Money (Goldencents) and Rushie (Liam's Map), will both line up as sons of past winners now doing well at stud. 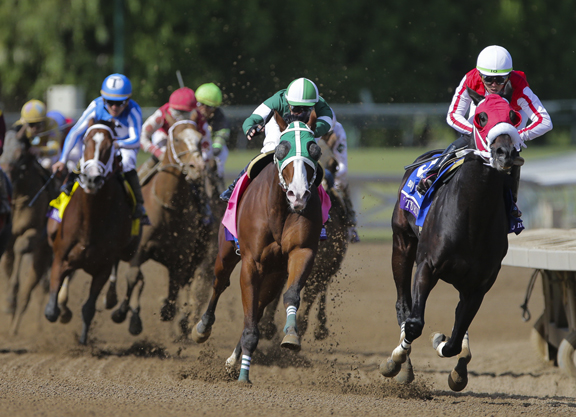 Only this week it was announced that last year's winner Spun to Run (Hard Spun) will stand at Gainesway in 2021, connections' perseverance at four having unfortunately backfired with an idle campaign. The same farm already hosts 2012 winner Tapizar (Tapit). In between, dual scorer Goldencents (Into Mischief), Liam's Map (Unbridled's Song), Tamarkuz (Speightstown) and City of Light (Quality Road) all claimed a place at stud with a common air of validity. Some of the horses they beat, moreover, powerfully elaborated their eligibility in other races. Tamarkuz was chased home by none other than Gun Runner (Candy Ride {Arg}) and Accelerate (Lookin At Lucky); while last year Spun to Run gave the slip to the stellar Omaha Beach (War Front).

For what remains a young race, that's a pretty formidable array of graduates. By the same token, it remains early days for most. But last year's runner-up and the 2018 winner, for instance, both looked worth every cent of opening fees as high as $45,000 and $40,000, respectively.

Yes, you could argue that they devalued other races by taking on lesser animals in this one. Had Omaha Beach instead been obliged to square up to Mitole (Eskendereya) in the Sprint, and City of Light to Accelerate in the Classic, both those championships would have gained depth. By that point in their respective careers, however, both had discovered an optimal theatre for their brilliance. It felt right that they should be granted a platform to showcase their brand. In rejecting bigger purses to run for $1 million, after all, connections make that trade in prestige with their eyes open.

The miler, of course, has long enjoyed a premium as a stud prospect. In theory, he strikes a happy medium between sprint speed and the attributes associated with the Classic Thoroughbred. My own view, admittedly, is that such an equilibrium is most truly achieved round a single turn, without the breathing space available when you spend half the race adjusting for bends. That's why the GI Metropolitan H. has such a storied record in announcing sires whose stock can carry their speed.

To be a true championship, drawing upon the best of both the sprinter and the two-turn horse, the Dirt Mile should really be a seamless, sweeping stampede that permits no hiding place. Nowadays, unfortunately, very few top tracks offer a “flat” mile on dirt. Hollywood Park and Arlington are out of the game, for different reasons, while the Breeders' Cup right now seems more likely to be staged at Finger Lakes than New York's city tracks. That leaves us only Churchill, among regular venues, though perhaps Laurel will include its “proper” mile in any prospectus for 2023.

Unfortunately, the hosts this year are obliged to compress the Dirt Mile into a configuration that flings the field straight into the clubhouse turn and, while gaining 70 yards, moves the winning post back to the sixteenth pole.

In 2015, Liam's Map–despite having made his reputation that summer with those thrilling attacks from the front at Saratoga–had so much in hand that he could drop onto the rail before switching into the stretch to reel in Lea (First Samurai) at his leisure. But a more contentious field will probably make the draw a much bigger factor this time.

Though we must salute what he did round a single turn in the GII Kelso H., stall 10 will surely make things a little, well, complicated for favorite Complexity (Maclean's Music). Conversely Art Collector (Bernardini) will have least ground to cover, if getting the necessary breaks. And while the setback that cost him a place in the GI Kentucky Derby appeared to tell in a flat GI Preakness effort, let's not forget how he had thrashed the winner on his last visit here.

Certainly Art Collector has the pedigree to consolidate the Dirt Mile's growing status as springboard to a stud career. He will be the hometown hope, of course, as was his dam–bred from a mare Bruce Lunsford had acquired to access a noble Greentree family–when closing to within a length in the 2011 GI Filly and Mare Turf at Churchill.

It was Lunsford, remember, who gave Mitch McConnell such a fright in their 2008 Senate race. He finds the politics of today depressingly negative and funding-driven. But he retained his optimism, when we spoke during the summer, and loves the fellowship of the Turf. So while many people this week find themselves standing apart for reasons other than contagion, let's hope that all Kentucky–united by their esteem for his trainer, jockey and owner-breeder–can come together and root for Art Collector.

This story was posted in Shared News and tagged Art Collector, Breeders' Cup Dirt Mile, Chris McGrath, This Side Up.