Home » Archive » Shared News » This Side Up: A Loss that Takes Us to the Epicenter

This Side Up: A Loss that Takes Us to the Epicenter 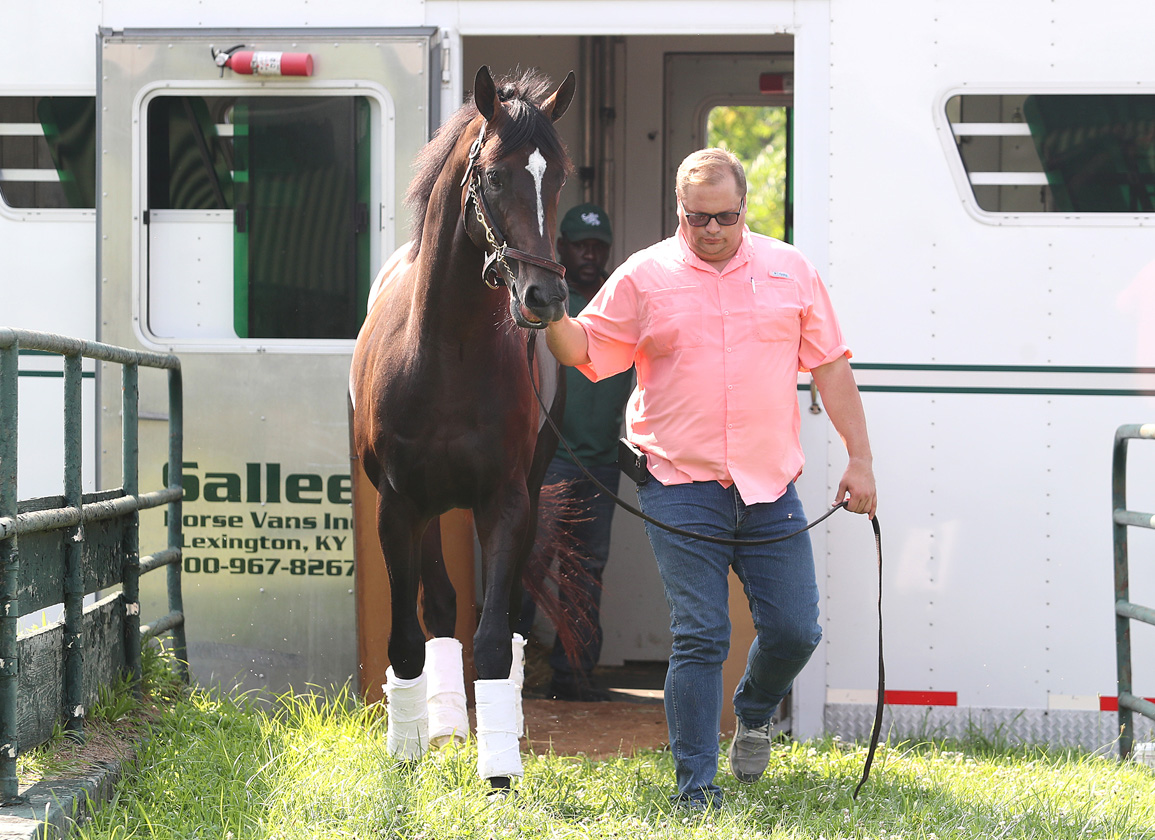 “The Derby gods.” It's a device that tells us rather more about us than them. We know there's no such thing, really; and that if they did exist, they would find sadistic satisfaction in stringing us along in the delusion that they will ultimately even out their torments and benedictions, only to let the ground fall away beneath us just as we reach for the stars.

But that's actually how our way of life-inherently so frivolous, just a herd of ponies running round in circles-connects us with the fundamentals of our place on this planet. To some among the lucky few to have sieved a horse all the way down from a foal crop of 20,000 into those 20 coveted gates at Churchill, the GI Kentucky Derby will unfold in conformity to some divine dispensation largely unreadable by us mortals. For others, no doubt, it will merely condense the random forces that determine where we finish up in the roulette wheel of life.

To be fair, the Derby gods are pretty flexible about these things. Setting any spiritual convictions to one side, you might say that they serve as shorthand for either “fate” or “destiny”. Fate implies that things are going to happen the way they're going to happen, and that there's no point trying to rationalize why. Destiny, in contrast, might suggest that our fortunes-while indeed inexorable-obey some kind of coherent narrative.

(To listen to this article as a podcast, click the arrow below.)

So which side are you on? If you're not quite sure, then ask the same question another way. After what happened to Midnight Bourbon (Tiznow), are you now looking to those Derby gods to clear a path for Epicenter (Not This Time)?

Because if you were directing our little world from on high, right now you would surely be feeling pretty disgusted with yourself. Of all horses, you chose Midnight Bourbon!

His loss was attributed to some out-of-the-blue “gastrointestinal event”. Well, if even those of us who admired him from afar felt some empathetic nausea, on hearing the news, how must it feel for those closest to a creature that had, until that moment, appeared the very incarnation of physical majesty in the Thoroughbred?

Because if we were in the business of perceiving some latent pattern in the chaos around us, then we would have to discern some almost witting purpose in the alacrity with which Midnight Bourbon salvaged our community, at an especially vulnerable moment, from fresh disaster.

Moreover in that split second when he somehow retrieved his balance in the GI Haskell S. roughhouse last summer, Midnight Bourbon exhibited a blend of athleticism and courage, exceptional genetic attributes of body and soul, that promised a further redemption. And that was to the sire-line extending through Tiznow to Man o' War and ultimately the Godolphin Arabian.

Now, sadly, that heritage has again been rendered precarious. We have lost something precious, equally, in Midnight Bourbon's maternal line: his mother was bred from a mare who duplicated the 29-for-45 Bayou legend Monique Rene not only as her own second dam, but also as that of her sire Yes It's True.

Not too many breeders would have doubled down there, and fewer yet would have combined the result with Tiznow, himself son of the Cinderella blue hen Cee's Song. But the result was such a physical paragon that he raised $575,000 as a yearling and then earned nomination at least as Best Supporting Actor in the sophomore crop. 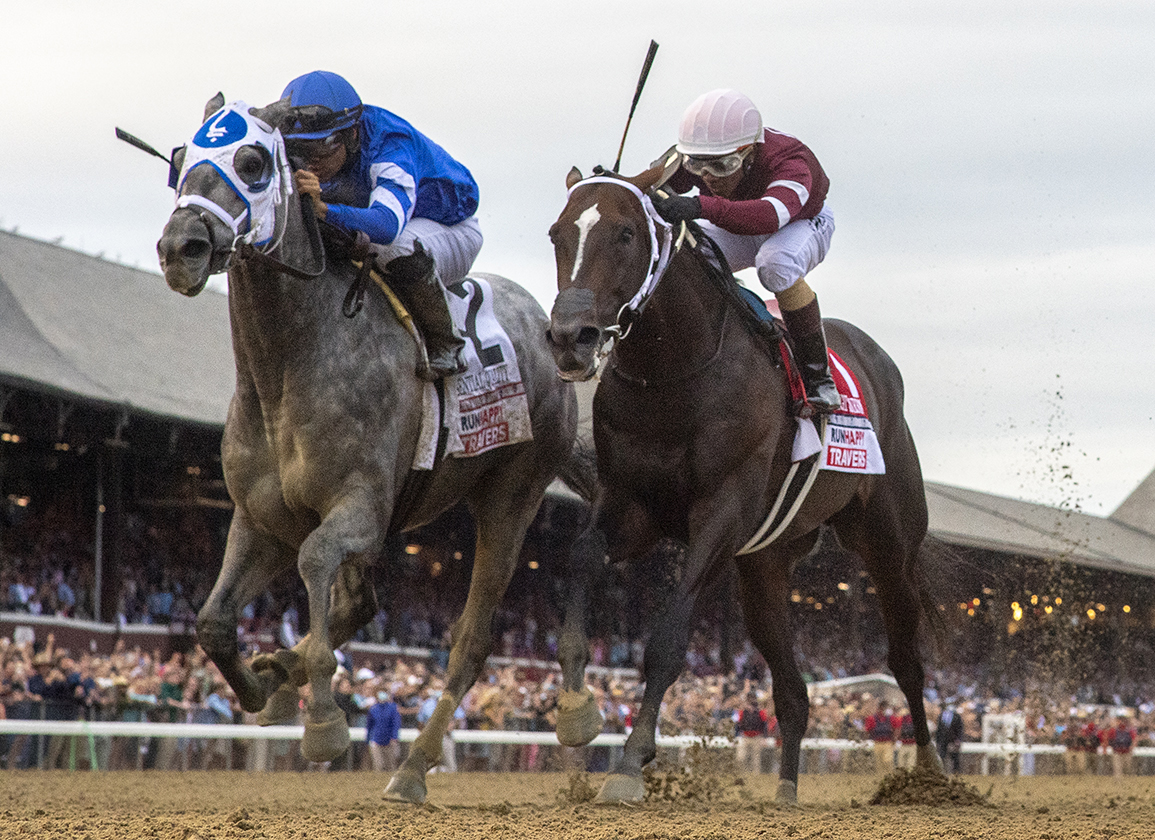 In running Essential Quality (Tapit) to a neck in their duel for the GI Travers S., Midnight Bourbon confirmed himself the perfect foil to a nearly robotic rival. Their respective win ratios could scarcely have been in starker contrast: that day Essential Quality went to eight-for-nine, while Midnight Bourbon has now exited with just two wins from 16 starts. Yet he yielded little to his rival, in terms of merit or consistency.

Instead he volunteered himself as a champion for those of us uncomfortable with the exorbitant value our industry places on first place, distilled in the bitter axiom “second sucks”. There's something so engaging, romantic almost, about a horse whose strivings tend to be as unavailing as they are unmistakably ardent.

That's why Midnight Bourbon will have been especially cherished by anyone who responds to sport as a mirror to life; and why any such person will be imploring Epicenter, representing the same owner and trainer, to meet his cue at Churchill.

Not because winning the Derby would serve as any kind of salve to their present pain, even for a trainer whose resume contains so few other omissions. No horseman would even begin to understand the notion that there might be any kind of equivalence between this disaster and any such triumph-other, that is, than as the famous “twin impostors” of Kipling's poem.

And that's the point really. The Derby gods can't actually redress what happened on their home patch this week. All they can do is make us shake our heads and thank the Thoroughbred, not for piecing together a puzzle we can never solve, but just for taking us closer-through all the joys and sufferings they bring us-to the mystery and wonder of life.

A bit like, say, when you sit out on the deck at Saratoga on a sultry summer night and gaze at the stars as you tinkle the ice in your midnight bourbon. Yes, even his name was perfect. Here was a horse that reminded us of the shared margin between grandeur and spirit in the elite racehorse, and rebuked our puerile obsession with first place.

How heartbreaking, that this living hymn to vitality should have been so abruptly, so cruelly, reduced to the most harrowing indignities of mortality. Midnight Bourbon has been denied the legacy he deserved, in the breed itself, and must make do with a less tangible immortality in our memories and hearts.

These, too, will be finite. In the meantime, however, let's raise a midnight toast to the lesson he bequeaths. For while those racing gods may not be interested in what horsemen may or may not “deserve”, here was a horse that at least showed us what it is to be worthy.