‘These Three Months Are Our Year’: Consignors Look for Light in Sales Darkness 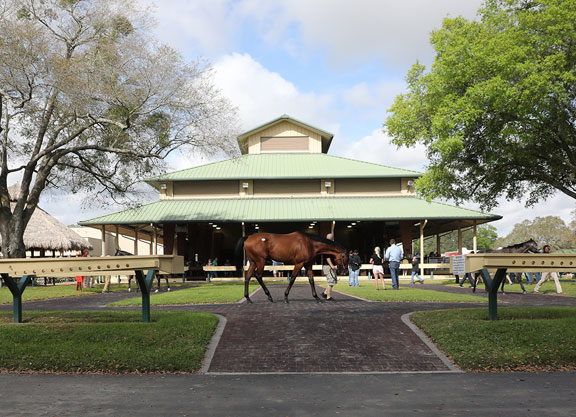 While the coronavirus pandemic’s most notable interruption to the world of horse racing has been the lack of, well, horses racing, many of the gears normally turning behind the scenes of the sport have been slowed or halted altogether as well. That includes the sales circuit, which has gone dark for several months as stay-at-home orders and bans on mass gatherings have, in some cases belatedly, trickled in to nearly all of the 50 states. As timing would have it, that shutdown basically covers all of 2-year-old sale season aside from the improbably completed OBS March Sale, putting the squeeze on consignors big and small who prepare for the spring auctions throughout the rest of the year.

The first domino to fall of the 2-year-olds in training auctions was Keeneland’s April Sale, scheduled for Apr. 7, which was soon followed by the cancellation of the entire spring race meet at the Lexington track. Fasig-Tipton announced a day later that its Gulfstream Sale, slated for Apr. 1 in Miami, would not be held. Fasig-Tipton then pushed back its May 18-19 Midlantic Sale–twice–and later canceled its June 3 Santa Anita Sale, while OBS delayed its Apr. 21-24 Spring Sale to June 9-12. If you’re keeping score at home, that auction and the now June 29-30 Midlantic Sale are the only major 2-year-old sales remaining on the calendar before yearlings take center stage.

“It’s been tricky, that’s for sure,” said Susan Montanye of SBM Training & Sales. “The horses that were slated to go to the sales, we tried to have them peak at the right time to perform and give us their 110% best on that day and not peak prior to having them go to a 2-year-old sale.”

“They were all sitting on go, particularly the horses going to Gulfstream,” added Eddie Woods of Eddie Woods Stables.

Not only are there no 2-year-old sales for at least the next two months, but the familiar 2-year-old racing season that kicks off at Keeneland has also been put on the back burner. That closure in particular leaves people like pinhooker and trainer Carlo Vaccarezza in a bind. Vaccarezza, who usually stables his horses at Palm Meadows and Gulfstream, one of the few tracks still running in America, had moved his entire string to Kentucky to showcase his babies for prospective buyers at Keeneland and Churchill Downs.

“I don’t have a single horse in Florida,” Vaccarezza said. “Usually we have a plan to see which 3-4 horses will go to the Gulfstream Sale, 3-4 horses to OBS March, 3-4 to April, you see who will fit at Timonium. I was trying to be helpful to Keeneland so we had some horses in their April sale. If all that happened, we would have known who sold, who didn’t sell, then those we try to train differently to be a racehorse. That’s completely out of the equation and we have no idea what’s going to happen.”

That uncertainty is unanimous amongst consignors, and those who oversee large numbers of horses now have hundreds of individual decisions to make on whether to dial back on their training, try to sell horses privately or potentially send them to the racetrack. For those horses who were revved up to breeze at one of the canceled or postponed sales and still have an auction ring in their future, consignors will have to walk a tightrope as they attempt to keep their charges happy and sound while making sure they can come back around to top form for the next sale, whenever that may be.

“We haven’t breezed a sale 2-year-old in two, probably three weeks,” said Woods. “Time seems to creep on by now. We went back, not to square one, but backed off the gas and turned some of the fillies out to round pens. We mostly took it easy, because we have to be in a position to pick them up and go with them when we need to go on with them, assuming there’s a sale to go to. Nobody’s got a crystal ball for this, so we’re two-minute licking them every couple of weeks just to keep them going forward and take the edge off a little bit.”

“It’s a new normal in our daily lives, so we’re just trying to take care of the horses in the same way we normally do, but we’ve adjusted our training schedules to accept these new challenges,” said Nick de Meric of perennial leading consignor de Meric Sales. “We’re just hoping we can get to the next sale.”

“My horses have seemed to adjust pretty well luckily,” said Montanye. “They still do their normal training every day. They can’t just gallop, they have to breeze, so we’ve just spaced them out further, instead of going fast we’re having them do two-minute licks, having them go a little further to keep them happy and sound. A couple of April horses we did turn out and gave them round pen time just to switch it up, because they’re feeling so damn good.”

Though their business has taken a massive hit, some consignors are trying to fill the gaps in their normal revenue by turning their facilities into private showcases for buyers who would have shown up at the juvenile sales and still have stalls to fill and money to spend. But even if those horses are now able to change hands, their purchase prices will inevitably come in way lower than they would’ve been at the end of a public bidding war.

“It’s a lot easier to sell a horse during an auction than through a private sale,” Vaccarezza said. “We bought 18 horses between all the yearling sales and I was lucky enough to move a couple of them, but I had an Uncle Mo filly [Hip 211 from Fasig-Tipton Saratoga] who probably would’ve gone for $2 million easy, and an Into Mischief colt [Hip 64 at Saratoga] who probably would’ve been a million-three to a million-five. Another Candy Ride (Arg) filly [Hip 1503] from Fasig October would’ve been a seven-figure horse. It’s going to be extremely difficult for not just me but other pinhookers who would’ve sold these horses for a huge amount otherwise.”

Another option for owners of sale 2-year-olds is to instead send them directly to the track to turn them into racehorses, but that has its issues as well–in most cases, such an alteration of course would necessitate several additional months to ramp up training before the horses are ready to enter a starting gate, which means several more months of bills before getting any return on their investment.

“That definitely will happen with some of them, but for others that’s not an option,” said de Meric. “We’re just trying to make something happen, and the majority of the horses we have are waiting.”

“Florida is still racing away, so we’ve moved a few horses down to Palm Meadows,” said Woods. “When stalls become available, guys are taking the odd baby down there, and once Kentucky opens back up we’ll have a lot of horses moving that way.”

“It’s been discussed and we did send a few to Keeneland prior to them closing the doors,” Montanye said. “It’s still on the table, and [some owners] want to have their horses at the track and further ahead of the game in case these 2-year-old sales come to a complete halt and somehow racing continues. But we haven’t scratched any, in fact we’ve added horses to the June sale.”

Meanwhile, like the rest of us, 2-year-old consignors are mostly just trying to get through to the other side of this frightening pandemic and have some semblance of a normal life pick back up. As a longtime South Florida trainer, Vaccarezza is doing his part to make sure his former compatriots can see it through too.

“I started a GoFundMe and have already raised over $10,000 in case anything happens for trainers to buy shavings and feed for horses,” he said. “My biggest fear is that a lot of trainers in South Florida are working people. I know a couple that work for UPS, one that works for a landscaping company, one that’s a painter, some guys are contractors. Those guys took a toll and have lost business. If a guy has two or three kids, a wife, a mortgage, a car payment, what’s going to happen? That’s my biggest fear, so I said, ‘Let’s start a fund just so the horses can get fed.'”

For de Meric, this interruption has meant a chance to stop and smell the roses, taking advantage of a temporary pause in the constant grind of the horse business to savor the little things in his life.

“I’ve never had the chance to really enjoy the Florida spring before, because we’re always busy and jumping around from place to place,” he said. “This year, I’ve gotten to be able to watch the sunrise, watch the geese fly overhead and see the trees bloom, so it’s been different that way.”

And like much of the Thoroughbred world, most consignors will do what they’ve always done through difficult times–keep their minds focused and their horses first.

“Bills still keep coming in, we’re still training, we still have to pay our employees, and for the majority of us, these three months are our year. This is where you can see light at the end of the tunnel and start to breathe a little,” Montanye said. “You put all these expenses in and it’s come to a complete standstill, so there’s definitely some frustration. But what can you do? You just try to keep your head above water and do what you would normally do: take care of the horses.”