The Week in Review: Ward Sets the Bar Higher 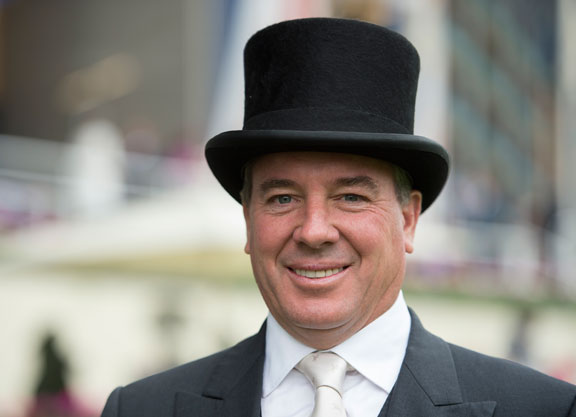 Wesley Ward winning 2-year-old races at the spring meet at Keeneland which concluded Friday, is about as unusual as night coming after day. But Ward took things to a new level at the recently concluded spring meet, putting together an historic, unprecedented run.

On opening day of the meet, pigs flew. Ward went 0-for-2 in the two 2-year-old races that were run. Both went to the Bret Calhoun barn. Ward didn't lose another 2-year-old race at the meet.

Ward's run began on the third day of the meet when he captured a race with the filly Stillwater Cove (Quality Road). That left nine 2-year-old races remaining at the meet, and Ward won every one of them. On Thursday, he won the first of two juvenile races with Mucho Amor (Mucho Macho Man) and finished his streak in style. In Thursday's sixth race, the final juvenile race of the meet, he finished one-two. The win went to Shang Shang Shang (Shanghai Bobby). Remarkably, neither of Ward's winners on Thursday were the favorite.

During the streak, Ward did lose a 2-year-old race at Aqueduct, but won another with What the Luck (Lookin at Lucky) on April 19 at Aqueduct. That's eleven 2-year-old winners in 18 days.

“I once won five races in a day at Woodbine, but when it comes to streaks nothing like has ever happened to me,” Ward said of the 10 straight 2-year-old wins at Keeneland. “Whenever I enter a horse I always feel I have a chance, but you know the percentages. I usually win about 20% of the time, so I know how hard it is to win one race, let alone 10 in a row. Everything just kind of came together with the 2-year-olds. We have a lot of depth, so we really benefitted when they split some of the races and it seemed like every time we wound up in the right spot. A lot of things had to come together and they all did.”

He's not even done. There will be two 2-year-old races Thursday at Belmont and Ward will run two horses in each race. He said he is high on all four.

For the Ward juveniles who win early, Royal Ascot is often their first big target. The trainer said he is not sure which ones he will take and won't be sure until giving them a chance to work on the grass. He said, however, he could take as many as six or seven to England. There, they will be joined by a handful of older horses, including Lady Aurelia (Scat Daddy). She won the G1 King's Stand there last year and the GII Queen Mary in 2016.

The difference? The takeout. What else could it possibly have been?

To the surprise of most everyone in the industry, Keeneland raised its takeout level for the 2017 fall meet. More often than not, takeout increases don't affect the handle but it appears that horseplayers finally rebelled when Keeneland raised its prices last fall. Wisely, Keeneland, for the spring meet, lowered the takeout rate for win, place and show bets back to their earlier levels. The bettors returned and supported the meet unlike they have in years.

Keeneland experimented with a higher takeout last fall, and it didn't work. Rather than digging its heels in, management did the right thing by lowering the take in several pool and it reaped the rewards.

Horseplayers, after losing round after round in the takeout wars, have finally won one. They showed Keeneland they were not willing to take additional punishment at the windows without fighting back and that they would react positively if management showed that their complaints were heard. Let's hope this goes down as a watershed moment in the battle over takeout, which remain egregiously high throughout the sport. Hopefully, other tracks were paying attention.

One more thing: If Keeneland did so well by lowering the takeout rates in the win, place, show and exacta pools, shouldn't they at least consider lowering the bite in the horizontal bets like the Pick 4? The rates for many of those bets remained the same as they were at the increased levels during Fall 2017. Keeneland has won back the love of the nation's players, but they can still do better. If the results of the just concluded spring meet mean anything, lowering the take on the horizontal bets will not only win over more fans but also increase business.

Advertising on Silks? Why on Earth Not?

If you had been watching any of the New Orleans Pelicans playoff games last week you might have noticed that their uniforms included a patch for Zatarain's. Zatarain's is a food and spice company based in New Orleans. It's not just the Pelicans. This year, the uniforms of all NBA teams include a small circular patch in the upper right hand corner for a sponsor.

Yet, when Benson's Lone Sailor (Majestic Warrior) runs in Saturday in the GI Kentucky Derby the owner will not be permitted to sell any advertising on her silks. So what's good for the NBA is not good for horse racing? Why?

The NBA gets it. A small, unobtrusive patch on a uniform does not cheapen anything and is a nice revenue source for a team. Horse racing does not. Not allowing some sort of advertising on silks is something that stuffy people decided on a long time ago. It's a rule that is out of touch with the times.

Gayle Benson certainly doesn't need whatever money a patch on her silks might bring in, but that's not the point. Most owners lose money and anything the sport can do to make things easier on them financially cannot be a bad things. Plus, racing is a sport that needs cache and it would look a whole lot cooler if it can prove it can attract companies like General Electric, Disney and Harley Davidson to align themselves with the sport. Those are among the companies that have affixed their logos to NBA uniforms.