The Week In Review: Transformation of TVG Seems Inevitable 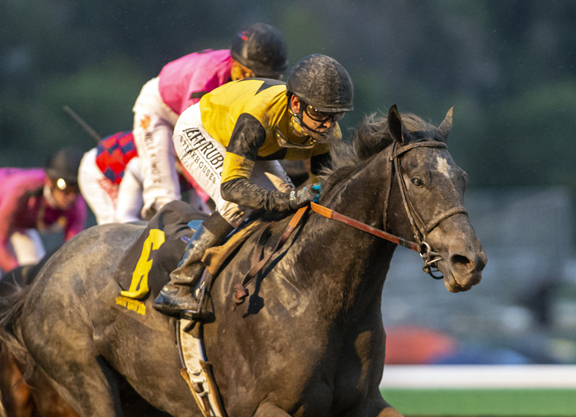 If you were trying to watch the early races from Gulfstream and Aqueduct on TVG over the weekend, you had a problem. On Saturdays and Sundays from 11 a.m. to 1 p.m. EST, TVG is airing a sports betting show called “More Ways to Win.” One of the hosts is Dave Weaver, who has been part of TVG's racing team.

By the time More Ways to Win went off the air on Saturday, two races had been run at Gulfstream, two at Aqueduct and Tampa and one at Laurel. For the Aqueduct and Gulfstream races, they interrupted the sports betting show just long enough to show the running of the race. There was nothing in the way of build up or analysis from the network's horse racing experts.

As things stand now, the racing fan isn't missing that much because of the More Ways to Win show. What is disturbing is the direction this is surely going to go.

More Ways to Win is from the sports betting firm Fanduel. TVG and Fanduel are owned by the same company. Fanduel is putting this much emphasis into a sports betting show when its product is currently available only to a tiny percentage of the country. New Jersey residents can bet with Fanduel online or at the Meadowlands. Fanduel also runs the sports book at the Greenbrier Resort in West Virginia and has the contract to eventually open a sportsbook at a casino in Pennsylvania. That's it.

Just imagine what the scope of Fanduel's sports betting platform will be in the U.S. in, say, five years. It will be massive. If they're devoting this much time to sports betting on TVG now, what will happen when they're in 30 states and their sports betting revenue dwarfs their take on racing?

The likely answer is that TVG is going to become a sports betting network that may or may not show a few horse races here and there. The racing can always be farmed out to TVG2, but that network is not available to nearly as many people as the main TVG network is.

People love to complain about TVG and, in particular, some of its hosts. You might want to stop taking TVG for granted because the TVG as we know it is probably not long for this world.

For what it's worth, the More Ways to Win show is outstanding, with lots of valuable insights from hosts, Weaver among them, who clearly know their stuff.

Upheaval on Road to the Derby

The first week in January is not normally a time when you expect anything significant to happen when it comes to potential candidates for the GI Kentucky Derby, but last Saturday's races produced the sort of upheaval normally found when the major preps come rolling around.

It was a very good day for two horses and a not-so-good-day for two others.

Despite the horse having had only one career start, the hype machine had hit overdrive for Coliseum (Tapit), the favorite in the GIII Sham S. at Santa Anita. That was hardly a surprise. Trained by Bob Baffert, by Tapit, owned by Godolphin and an easy winner of his maiden race, the 'TDN Rising Star's potential seemed unlimited. The only glitch was that Baffert had often mentioned that the horse was high on talent but needed to make strides in the maturity department.

Baffert's worst fears came true when Coliseum left the gate seemingly disinterested and never really got into gear. In a flat performance, he finished sixth, beating one horse. While it was a major setback, it's way too early to give up on Coliseum.

“He needed the race and he got behind after he didn't break and I was afraid of that,” Baffert said.

Still, with the way his 3-year-olds had been mowing down everything in sight since last summer, it was a shock to see a highly regarded Baffert colt throw in a clinker. Guess, the guy is human after all.

Horses mature at different rates and Baffert will, no doubt, eventually bring out the best in him. That may not happen by Derby Day, so, perhaps this could be a GI Haskell-GI Travers horse. We'll see.

As Coliseum took a step in the wrong direction, Sham winner Gunmetal Gray (Exchange Rate) vaulted into the top tier of Derby contenders with a visually impressive win. The horse was last on the final bend before unleashing a powerful turn of foot that carried him to a one-length win under Mike Smith. It was the first start for the Jerry Hollendorfer-trained colt since he finished fifth in the GI Breeders' Cup Juvenile.

Even with the explosive late effort, there will no doubt be skeptics when it comes to Gunmetal Gray. His Beyer figure was an 82. That's not the kind of number it takes to win the Kentucky Derby. Not even close.

At Gulfstream, there was a similar story in the one-mile Mucho Macho Man S. Code of Honor (Noble Mission {GB}), appeared to be a major player on the way to Louisville. In the hands of Hall of Fame trainer Shug McGaughey, he broke his maiden at Saratoga and then finished second in the GI Champagne after stumbling at start and spotting the field several lengths. With a fever having knocked him of the Juvenile, he finally made it back to the races yesterday, and the results were not pretty. With no apparent major excuses, he finished a lackluster fourth.

The winner was 'Rising Star' Mihos (Cairo Prince). In his first try beyond six furlongs he stayed perfect at three-for-three for trainer Jimmy Jerkens, winning by a neck. While there was nothing wrong with his race, he will likely have to do more before being considered an upper echelon Derby candidate.

Looks like the computer guys–those big players who use computer algorithms to handicap the races and collect huge rebates–made major last-second bets on the Sham. Based on the betting patterns, they were clearly convinced that Coliseum was an overlay. Whether or not they collected on Gunmetal Gray is unclear.

Here are the odds when the horses entered the gate and the final odds:

This may have been a no harm, no foul situation since the price on the winner didn't change. But suppose someone had bet on Much Better and he won. They were expecting to collect $26 and instead cashed for $16. You win, but you feel like you lost. That's not how you keep your customers coming back. Imagine how much money had to bet on a Saturday card at Santa Anita to account for such huge late odds swings? This is bad for the game.