Home » Archive » Shared News » The Week in Review: The Race Everyone Wants to See, Midnight Bisou Vs. Monomoy Girl

The Week in Review: The Race Everyone Wants to See, Midnight Bisou Vs. Monomoy Girl 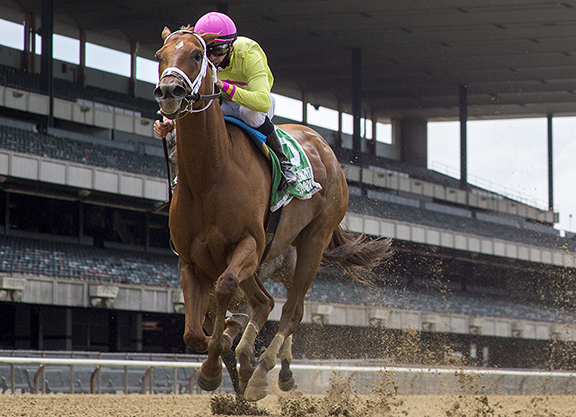 The running of the GII Ruffian S. Saturday at Belmont lacked the sizzle that was part of the narrative for several other major races over the weekend, but that wasn't the fault of Monomoy Girl (Tapizar). She did exactly what was asked of her. She showed up and beat four overmatched horses in an effort that was more perfunctory than impressive.

“This was a nice race for her to come back into stakes competition and now we can tackle some bigger races and a tougher field, too,” jockey Florent Geroux said.

With Monomoy Girl coming back off an 18-month layoff, trainer Brad Cox was in no hurry to throw her to the wolves. He started her off in an allowance race at Churchill Downs and then in the one-mile, one-turn Ruffian, a race that didn't figure to include a stellar group of opponents for the 2018 Eclipse Award winner. But the time has come for Cox to get more aggressive and point for a race that will be a truer test.

There are a lot of good storylines out there this year. How far can Tiz the Law (Constitution) go in the strangest Triple Crown ever? What will Maximum Security (New Year's Day) look like when he comes back for new trainer Bob Baffert? At age seven, will Tom's d'Etat (Smart Strike) continue to thrive for trainer Al Stall, Jr. and be named Horse of the Year?

But nothing would compare to a rematch between Monomoy Girl and Midnight Bisou (Midnight Lute). It's enough that it would be a showdown between two superstar mares, but it's the intrigue, uncertainties and twists that would make this such an exciting, unpredictable “good-for-the game” race.

With Monomoy Girl sidelined throughout 2019, Midnight Bisou flourished. She went seven for eight last year and was named champion older filly or mare. She's been every bit as good, if not better, this year, finishing second when going against males in the $20-million Saudi Cup and then returning with a flourish, an 8 1/4-length winner in the GII Fleur de Lis S. at Churchill. She's scheduled to go next in the GI Personal Ensign S. at Saratoga Aug. 1.

The only way to find out is for them to meet on the racetrack.

The most likely spot for that to happen would ordinarily be in the GI Breeders' Cup Distaff, but there's no certainty both will be there because Midnight Bisou's connections have said their horse may run in the GI Breeders' Cup Classic. There is still the possibility, however, that both could land in the same prep for the Breeders' Cup, perhaps in the GII Beldame S. at Belmont or, more likely, the GI Spinster S. at Keeneland.

More often than not, the stars don't align when it comes to getting star horses into the gate to face one another. Rachel Alexandra never did face Zenyatta. But this one might be different. The ownership groups behind both horses have already shown that they are game for anything. Midnight Bisou was slated to be retired at the end of last year, but came back for another season, which has included an adventurous trip to Saudi Arabia. The Monomoy Girl camp endured 18 months away from the races and brought their horse back when many would have retired her. Neither one is afraid of a challenge or will duck anyone. Whether it's in the Breeders' Cup or in a fall prep, they very well could face one another.

Should they meet, I would back Monomoy Girl. Until Midnight Bisou proves she can beat her, I can't get past those four races in 2018 and Monomoy Girl looks like the time away has done nothing to diminish her skills. But the fun won't be in being right or wrong, but in seeing two of the best of their generation proving their superiority on the racetrack. Fingers crossed that it happens.

Kudos to Swiss Skydiver and Her Team

Trainer Kenny McPeek and owner Peter Callahan could have gone the safe route and run Swiss Skydiver (Daredevil) against fillies in the GI Central Bank Ashland S., a race she likely would have won. Instead, they decided to run their filly against boys in the GII Toyota Blue Grass S.

In the end, it may have cost them a Grade I win and the winner's share of a $400,000 purse, but they need not look back or have any regrets. They are a rare pair that figured out that sometimes it's worth giving your horse the ultimate test and trying to make history. Had Swiss Skydiver run seventh, they might have looked foolish. But she put in a valiant effort and finished second behind a quickly rising star in Art Collector (Bernardini). In defeat, she earned more respect and admiration than she possibly could have achieved by beating fillies for a fourth straight time in the Ashland.

Swiss Skydriver earned enough points to run in the GI Kentucky Derby, but McPeek said the GI Kentucky Oaks is now the plan. That's the right choice. If she couldn't win the Blue Grass, she's not a Derby winner. What she is is an outstanding filly who put in a valiant effort for an owner and trainer who made this a Blue Grass to remember.

There was another race last week where the odds plummeted on a horse at the very last second and, of course, the horse won. This time it happened at Keeneland. In the sixth race Friday, the odds on Early Mischief (Into Mischief) dropped from 10-1 to 5-1, which didn't show up until the race was underway.

Someone at Keeneland understood how bad this must have looked. These odds drops are the result of the computer/rebate players pounding the pools at the very last second, betting so much that they can cause massive odds shifts. There's nothing illegal about this, but every time it happens, it leaves a bad taste in everyone's mouth and leads some to believe the game is rigged. It's a serious problem.

Keeneland decided to inform the public of exactly what happened. They investigated and then issued a statement, revealing that $16,000 was bet to win on Early Mischief in the last betting cycle. That same cycle accounted for 26% of the win pool.

That doesn't solve a problem that is not going to go away, but Keeneland did everything it could to be transparent and let the wagering public know that it had their backs. Other tracks need to follow Keeneland's lead.