The Week in Review: The Met Mile Belongs on Memorial Day 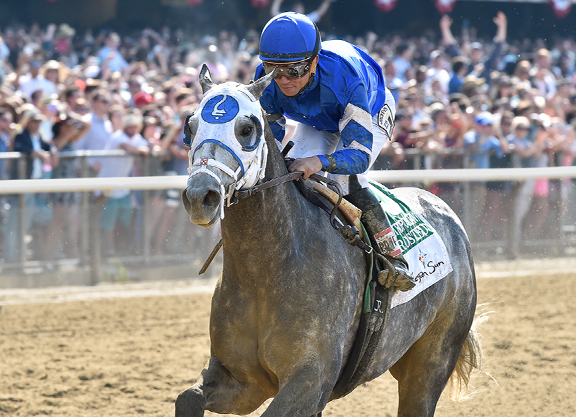 A New York racing tradition began in 1971, the first time that Memorial Day was officially celebrated each year on the last Monday in May. A crowd of 61,147 showed up that Monday at Belmont Park to watch Tunex win the $121,600 Metropolitan Mile for trainer Allen Jerkens and owner Hobeau Farm. For the next 42 years, New York racing fans circled Memorial Day on their calendars, knowing that it would be one of the biggest days of the year, thanks to the GI Metropolitan H.

In 1976 and 1977, they saw the mighty Forego win the race. In 1982, the 3-year-old Conquistador Cielo won by 7 1/4 lengths, five days before he would return to win the GI Belmont S. In 1990, Criminal Type beat Easy Goer and Housebuster. In 1994, Holy Bull won the Met, rebounding from his lackluster performance in the GI Kentucky Derby. Ghostzapper won in 2005. The winner in 2010 was Quality Road.

Fast forward to Memorial Day 2022 and the Belmont card not only won't include the Met Mile, but there are no graded stakes on the program. The highlight on this afternoon will be five stakes races for New York-breds. There were supposed to be six, but one, the Commentator H., did not fill. It will be just another day at the track.

During the three-day holiday weekend, Belmont offered just one graded stakes, Saturday's GIII Soaring Softly S. The weekend was crying out for a big race, and there is no better way to fill the void than returning the Met Mile to its traditional place on the calendar.

The Met Mile was last run on Memorial Day in 2013. The following year, it was moved to Belmont Day and it has remained there ever since. The idea was to create a blockbuster card that went beyond just the Belmont Stakes. This year, there will be nine graded stakes on the card, eight of them Grade I's. It's working. With the exception of the Saturday Breeders' Cup program, the Belmont Stakes card might be the best in the sport. Last year's handle for the card was $112 million, a record for a non-Triple Crown year.

But there's been a price to pay. The weekend racing leading up to and following the Belmont has absolutely no sizzle. That might be fine for some of the weeks, but it shouldn't be ok for Memorial Day.

You can make a case that the Met is the third most important, most prestigious race run each year in New York, behind only the GI Travers S. and the Belmont. Put it along side eight claiming races if you have to and it can carry a day. But on Belmont Day it tends to get lost.

The solution is to go back to Memorial Day. To do so wouldn't affect Belmont Day one bit. A Met Mile-less card that still had eight stakes, seven of them Grade I's, and a Triple Crown event would get by just fine without the Met. And moving the Met back to Memorial Day would instantly make the Monday holiday program the special type of occasion that it was for 42 years but is no longer.

Repole-Viola Partnership Off To Good Start

It comes as no surprise that the first two-year-old to earn 'TDN Rising Star' status this year in New York is owned by the partnership of Mike Repole and Vinnie Viola. The feat was accomplished Friday at Belmont when Forte (Violence) romped by 7 3/4 lengths, paying $2.40 to win. Forte was purchased for $110,000 last year at Keeneland September.

Viola and Repole have assembled a stable of 2-year-olds that is so large and so potent that it is unlike anything ever seen in racing before. They bought 43 yearlings last year at Keeneland September, paying a combined $16.045 million. They also bought three yearlings at Fasig-Tipton sales for an aggregate cost of $1.725 million. The vast majority of the horses are colts.

“Vinnie and I have at least 50 2-year-olds together,” Repole said via text. “Plus, we probably have at least 25 each alone. I'm extremely excited about these 2-year-olds. Forte looked great in his debut, winning by almost eight lengths and getting an 81 Beyer. Vinnie and I are excited about unleashing some potential future stars at Saratoga. Building this stable has been 15 years in the making for me and the great team I have managing the stable.”

While awaiting the debut of more 2-year-olds, Repole can turn his attention to the GI Belmont S. He has a confirmed starter in Mo Donegal (Uncle Mo) and says that he is “leaning heavily” toward running the filly Nest (Curlin) in the race.

“If we run her, it will be because she deserves to be in this race,” Repole said. “She is just as fast as the 3-year-old colts. She is a daughter of Curlin and will relish the distance.”

Piggott in the North America

Equibase stats on Lestor Piggott's rides in North America go back only to 1976. Starting with that time, Piggott, who passed away Sunday at age 86, had seven winners in North America from 68 mounts. That includes two stakes wins, with Royal Academy in the 1990 GI Breeders' Cup Mile, and with Argument (Fr) in the 1980 GI Washington D.C. International.

Piggott's last-ever mount in the U.S. was one he probably would have liked to forget. He rode Mr. Brooks (GB) in the 1992 GI Breeders' Cup Sprint, where the horse broke down and had to be euthanized.

In 1979, the Meadowlands brought him over to take part in an international jockey challenge pitting U.S. versus European riders. Steve Cauthen captained the victorious U.S. team. Piggott did not win a race that night.

After riding in the 1967 D.C. International, Piggott stayed in the U.S and tried to break in at Aqueduct during a time of year when flat racing is shutdown in the U.K. According to a New York Times report, he was 2-for-his-first-18 over the course of seven days. He said his intention was to finish the Aqueduct meet, which ended Dec. 15. When asked why he had made a detour at Aqueduct before returning to the U.K., Piggott said: “because I enjoy riding. Why not ride here?” He admitted he wasn't getting on the best mounts. “I wouldn't be riding these bad ones in England,” he said. “But I guess there's nothing else I can do here.”